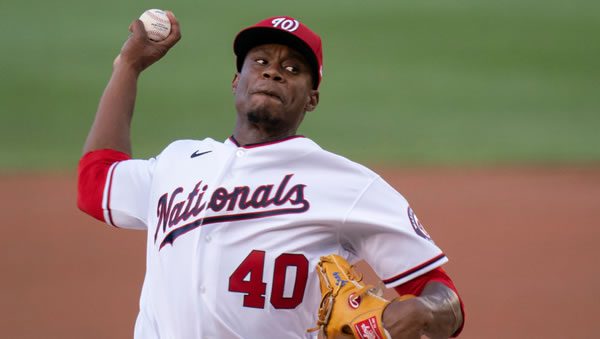 Money Line: Mariners -115 / Nationals -105 (Get the best MLB lines >>> You gotta take this stuff seriously if you want to have a chance of winning!)

The Washington Nationals host the Seattle Mariners on Tuesday, July 12th at Nationals Park. The first pitch in this matchup is scheduled for 07:05 ET. The MLB Odds Board places Seattle as the favorite (-115), with an OU line set at 9.5.

The Seattle Mariners will look to add another win to their resume after pulling out a slim 6-5 win over the Blue Jays. The Blue Jays came up with 10 hits leading to 5 runs against Seattle’s pitchers. The Mariners benefited from an offense that generated 6 runs on 7 hits. Heading into their last game, Seattle was the betting favorite at -125.0. Through 42 games as the favorite, the team has found the win column at a rate of 60.0%. Together, the Mariners and Blue Jays combined to surpass the over-under betting line set at 8.0 runs. The Mariners now have an over-under record of 41-44-2.

The Mariners will look to continue their strong play, as they are 5-0 over their last five contests. Over this stretch, the team has a positive run differential at +17. Offensively, the team has put up 30 runs in their last 5 games. Seattle’s season average comes in at 4.07 (24th. So far, Seattle has won over half of their 27 series played, going 14-12-1.

The Nationals are coming off a tight loss to the Braves, dropping the game 4-3. Despite the losing effort, the team’s pitchers held the Braves to 4 runs and 12 hits. The Nationals’ offense ended the game with just 3 runs on 5 hits. Leading into Washington’s loss they were the underdogs, getting 180.0 on the moneyline. So far, the team has gone into 71 games as the underdog, still finding the win column at a rate of 32.0%. With this result, the Nationals and Braves combined to fall below the over-under line of 10.0 runs. With this outcome, the team’s over-under record drops back to even at 42-42-4.

In their last 5 contests, the Nationals have just 1 win, going 1-4. During this time, the team has a run differential of -13. If Washington is going to pick up their play, they need to improve their offensive performance. Over their last 5 contests, they are averaging just 2.8 runs per game, compared to a season average of 3.88. Washington has a below .500 series record of just 7-18-2.

Today’s game between the Seattle Mariners and Washington Nationals is their first matchup of the year. More Picks: Get our Houston at LA Angels recommended bet for 7/12/22 >>>

Heading into Tuesday’s matchup between Seattle and Washington, the Mariners have the slight edge on the moneyline. This comes despite Seattle entering on an 8-game win streak. Look for Chris Flexen to continue his strong stretch of pitching as the Mariners pick up yet another win. Free MLB Pick: Mariners Moneyline. Bet your Mariners vs. Nationals pick and ALL your baseball bets for FREE this week by taking advantage of a 100% REAL CASH bonus on your first deposit of $100 to $300 when you use bonus code PREDICT100 at MyBookie Sportsbook!