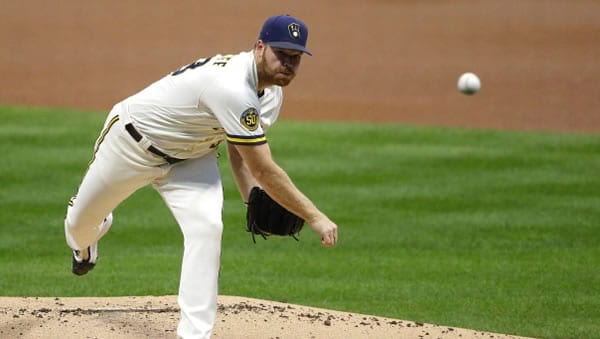 After taking the opener of this three-game interleague series Friday night, the Brewers shoot for .500 on the season when the teams meet against Saturday evening in C-Town. But Milwaukee has failed in this position several times over recent weeks. Who do we like here for our free MLB pick?

Saturday’s MLB betting odds opened Cleveland and Civale at around -120 over Milwaukee and Woodruff, with an over/under of eight runs. Early betting action then bumped the Indians to -130.

Cleveland could also be found getting upwards of +150, giving the run and a half on the MLB run line.

Milwaukee grabbed the opener of this series Friday night 7-1. That game was tied at 1-1 through six innings, but the Brewers scored four runs in the seventh and two in the eighth to pull away.

Milwaukee won Friday as a +130 underdog on the MLB betting odds, and the game pushed its total of eight runs.

With Friday’s win, the Brewers are 5-2 over their last seven games.

With Friday’s loss, Cleveland is 2-3 over its last five games.

At 18-19 overall, Milwaukee trails the first-place Cubs by 4.5 games in the NL Central. But the Brewers also own the No. 6 spot in the National League standings, which this season is good for a playoff spot.

At 23-15 overall, Cleveland trails the first-place White Sox by a half-game in the AL Central. The Indians also own the No. 4 spot in the American League standings.

These teams last met two seasons ago when Cleveland took three of four games from Milwaukee.

Civale is 5/7 on quality starts this season. Last Sunday, he gave up five runs and eight hits through six innings of a 7-2 Cleveland loss to St. Louis. But in his two starts previous to that, he only allowed four runs and 12 hits through 15 innings, with one walk and 14 strikeouts.

On the season, the Indians are 3-4 with Civale, with the unders going 5-2.

This will be Civale’s first-ever start against Milwaukee.

Woodruff is 3/8 on quality starts this season. Last Sunday, he gave up four runs on four hits, including a couple of homers, through five innings of a 5-1 Brewers loss to Pittsburgh. And over his last three starts, he’s allowed eight runs and 17 hits through 16 innings, with five walks and 18 strikeouts.

Milwaukee is 4-4 with Woodruff this season, with the unders going 7-1.

This will be Woodruff’s first-ever start against Cleveland.

Milwaukee is batting .238 against right-handed pitching this season, with a .319 team OBP and a .392 team slugging percentage. But the Brewers have also scored at least six runs five times over their last seven games.

Cleveland is batting .232/.317/.371 vs. right-handed pitching this season. The Indians have also been held to two runs or less four times over their last six games.

The Cleveland pen owns a 2.81 ERA, a 1.07 WHIP, and a 2.96 K/BB ratio. Numbers like those help this unit rank among the top three or four bullpens in Baseball this year.

Over the past several weeks, the Brewers have tried several times to reach the .500 mark, getting within one game, but come up empty every time. It’s like some kind of mental block. Meanwhile, we gotta give the Indians our handicapping check-marks in both the pitching match-up and in the bullpen comparison. We’ll take Cleveland, the home team at the short price, for our free MLB pick for Saturday. Bet this weekend’s MLB picks for FREE by taking advantage of a sweet 100% real cash bonus on your first deposit of $100 to $300 at MyBookie! You must use this special link to sign up and make sure promo code/bonus code PREDICT100 is in the promo box. (It should be pre-populated there).