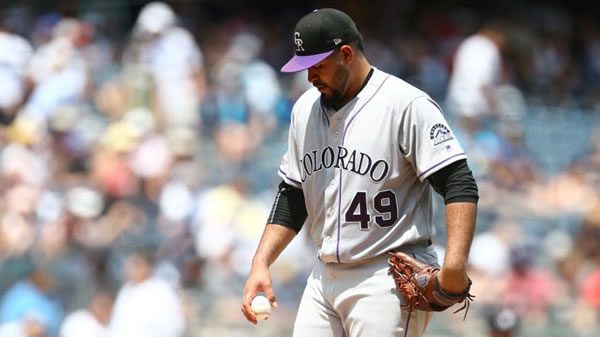 The Colorado Rockies host the San Francisco Giants on Monday, May 16th at Coors Field. The first pitch in this matchup is scheduled for 08:40 ET. The MLB Odds Board places San Francisco as the favorite (-145), with an OU line set at 11.0.

The Giants are hoping to get back on track after falling to St. Louis, 15-6. San Francisco’s pitching staff finished the game by allowing 17 hits, leading to 15 runs. The Giants ended the game with 7 hits of their own, leading to 6 runs. This defeat came despite being favored at -135.0. Through 28 games as the favorite, the team has found the win column at a rate of 68.0%. This game went over the posted over-under line of 7.0 runs. San Francisco now has an over-under record of (18-15-1).

The Giants come into this game with a 3-2 record over their last 5 contests. Over this stretch, the team has a positive run differential at 6. A key to their recent success has been an offense averaging 6.0 runs per game, compared to their season average of 4.97. So far, San Francisco has won over half of their 12 series played, going 6-4-2.

The Rockies will look to bounce back from a tight 8-7 loss to the Royals. Colorado’s pitching staff gave up 9 hits, leading to 8 runs for the Royals. At the plate, the Rockies scored 7 times on 9 hits. Colorado dropped the game despite being favored at -137.0. For the season, the team has been favored in 13 games, winning at a rate of 62.0%. The Rockies and Royals went over the run total line set at 11.0 runs. Overall, the team has gone over the betting line in over half of their games, going 19-14-1.

San Francisco will roll with Alex Wood (3-2) as their starter. So far, Wood has put together an ERA of 3.6. In his appearances leading up to today, he has lasted an average of 5.0 innings. Teams have been able to rack up runs against him, as he has a batting average allowed of 0.274. Opposing batters have been able to drive the ball with power against Wood, averaging 1.2 homers per 9 innings pitched. On the season, Alex Wood has had no problem racking up strikeouts, posting a strikeout percentage of 23.0% while averaging 5.0 K’s per game. Throughout the season, Wood has avoided walking batters, allowing just 2.7 per contest.

The Colorado Rockies will send Antonio Senzatela to the mound with an overall record of 2-2. To date, Senzatela has an ERA of 4.88 while lasting an average of 4.53 innings per appearance. Opposing teams have hit the ball well against the right-hander, with a batting average of 0.402. Opposing batters are hitting for power at a below-average rate against Senzatela, as he is allowing just 0.66 per 9 innings. Senzatela is in the bottom half of the league in strikeouts, averaging just 1.33 K’s per game. This includes a strikeout percentage of 6.0%. Leading into the game, he has shown a strong command of his pitches, averaging just 2.28 walks per contest.

Today’s matchup between the San Francisco Giants and Colorado Rockies will be their 3rd meeting of the season. San Francisco has the lead in the series at 3-0. Through 3rd games, the series’ over-under record is 3-0, with the average run total sitting at 9.74 runs per game. In these matchups, the average scoring differential sits at 5.33 runs. Last season, San Francisco picked up the series win, 15 games to 4. In these 19 meetings, the two teams combined for an over-under record of 9-10. Last year, the Giants and Rockies averaged 9.74 runs per game. On average, the winning team won by a margin of 4.26 runs per contest.

Even though the Giants come into the game having lost two straight games, they have an opportunity to bounce back in a big way against Antonio Senzatela. Even though Senzatela’s ERA of 4.88 doesn’t jump off the chart, advanced metrics place him near the bottom of the league among starters. Currently, he is the worst rated pitcher in expected batting average and in the 7th percentile in expected slugging percentage. I recommend grabbing the Giants on the moneyline.

Free MLB Pick: Giants Moneyline. Bet your Major League Baseball picks for free this week by taking advantage of a 100% bonus at one of the web’s best books on our sportsbook bonuses page!