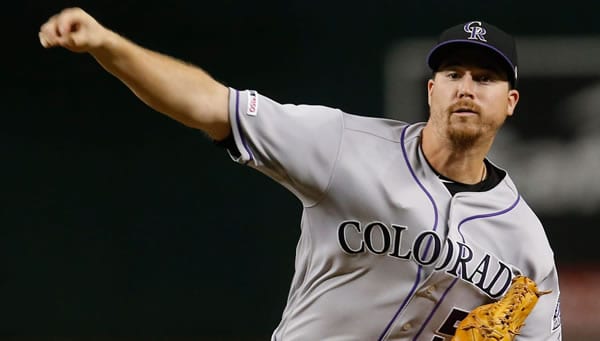 The Padres look to continue their run toward the playoffs when they host the rival Rockies for the middle game of a three-game NL West series Tuesday night at Petco Park. San Diego took the opener of this series Monday night in walk-off fashion and now seeks the series victory. How are we playing this game with our free MLB pick?

Tuesday’s MLB betting odds opened San Diego and Clevinger at around -240 over Colorado and Gonzalez, with an over/under of nine runs. Both figures were holding steady in early betting action.

The Padres could also be found at around -120, giving the run and a half on the MLB run line.

San Diego grabbed the opener of this series Monday night 1-0. That game was tied into the bottom of the ninth inning when the Padres pushed across a run on a bloop double for the victory.

San Diego won Monday as a -185 favorite on the MLB betting odds but couldn’t cover against the run line at a price of -100.

With Monday’s win, the Padres are 6-2 over their last eight games.

With Monday’s loss, Colorado is 3-2 over its last five games.

At 26-17 overall, San Diego trails the first-place Dodgers by 4.5 games in the NL West, but it’s also 4.5 games clear of third-place San Francisco. And second place in the division makes the playoffs this season.

At 20-21, Colorado trails division-leading Los Angeles by 9.5 games in the NL West, but it’s also only a half-game behind San Francisco in the battle for the eighth and final National League playoff spot.

Clevinger is making his second start for his new team Tuesday night, after coming over in a trade with Cleveland. On the season, he’s 3/5 on quality starts, and one out away from 4/5. Last Thursday, in his debut for the Padres, he held the Angels to two runs and seven hits through six innings, although San Diego lost that game 2-0. And over his last three starts, he’s allowed just four runs and 17 hits through 17 2/3 innings.

The Indians played 2-2 with Clevinger this year, with the unders going 3-0-1.

In his only previous career start against the Rockies back in 2017, Clevinger gave up five runs in four innings of an 11-3 Cleveland loss.

Gonzalez is 0/1 on quality starts this season, to go along with two appearances in relief. Last Thursday, he gave up three runs and five hits, including a couple of homers, through three innings of a 7-6 Colorado win over San Francisco. But three days before that, he held these Rockies to one run and two hits through four frames.

On the season, Gonzalez has allowed six runs – five earned – and ten hits through nine innings, with four walks and nine strikeouts.

Over his last three appearances against San Diego, two last year, and the one ten days ago, Gonzalez allowed seven runs and 14 hits through 13 innings.

Colorado is batting .248 against right-handed pitching this season, with a .311 team OBP and a .410 team slugging percentage. But the Rockies have also scored at least five runs five times over their last six games.

San Diego is batting .263/.341/.490 against RH pitching this season. Numbers like that help this lineup rank among the top three or four in Baseball in this split. But this lineup also just lost a good left-handed stick in Greg Hosmer (eight HR, 32 RBI this season), who suffered a broken finger Monday.

The Colorado bullpen owns a 6.75 ERA this season and a 1.59 WHIP, along with a 2.33 K/BB ratio. Numbers like those “help” this unit rank among the bottom half-dozen bullpens in Baseball.

San Diego owns our handicapping check-marks in the pitching match-up, with the sticks, and in the bullpen comparison. So the Padres are the pick. But we don’t like that line. So we’ll take a chance and give the run and half with San Diego against the run line. On an unrelated note, don’t forget to catch my weekly NFL predictions!