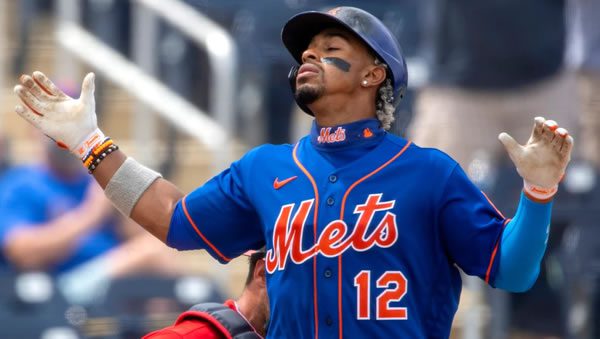 The Atlanta Braves host the New York Mets on Wednesday August 17th at Truist Park. The first pitch in this matchup is scheduled for 07:20 ET. The MLB Odds Board places New York as the favorite (-130), with an OU line set at 7.5.

The Mets come into this matchup having suffered a 5 run loss to the Braves (5-0). On their way to giving up 5 runs, the Mets staff allowed 8 hits. With their 3 hits, the Mets could only muster 0 runs. New York’s loss came as the underdog, getting 141.0 on the moneyline. Combined, the Mets and Braves fell short of the over-under betting line of 8.5 runs. However, for the season, New York still has an overall over-under record of 58-50-9.

The Atlanta Braves will be looking to pick up another win, as they most recently defeated the Mets by 5 runs (5-0). In the winning effort, the team’s pitchers held the Mets to 0 runs and 3 hits. In the victory, the Braves came up with 8 hits and 5 runs. Heading into action, Atlanta was the favorite at -170.0. For the season, the team has been favored in 99 games, winning at a rate of 69.0%. Combined, the Braves and Mets’ run total fell below the over-under line of 8.5 runs. Even still, Atlanta games have still gone over the betting total over half of the time, at 59-52-7.

The Braves come into the matchup looking to stay hot, going 5-0 over their last five contests. During this time, the team’s run differential sits at +26. Compared to their season average, the Braves come into this game swinging the bats well, averaging 6.4 runs per game. On the season, Atlanta has won more than half of their series, going 19-12-6.

The New York Mets will send Max Scherzer to the mound with an overall record of 8-2. Through 16 appearances, Scherzer has an ERA of just 1.93 while averaging 6.39 innings per appearance. Hits have been hard to come by against the right-hander, as his batting average allowed is just 0.209. Not only does Scherzer have a strong batting average allowed, but he has also avoided giving up home runs. In his previous outings, opponents are averaging just 0.7 HR/9. In terms of strikeouts, Max Scherzer has a strong strikeout percentage of 31.0%, including a per game average of 7.88. Leading into the game, he has shown a strong command of his pitches, averaging just 1.49 walks per contest.

In today’s game, Atlanta turns to starter Jake Odorizzi. For the year, he has a record of 4-3. Odorizzi gets the start with an ERA of 3.75. On average, he has lasted 5.0 innings per appearance. So far, Odorizzi has a batting average allowed of 0.23. So far, Odorizzi has managed to keep the ball in the ballpark, allowing just 0.75 home runs per 9 innings. Odorizzi’s current strikeout average is 3.83 per game. This includes a K rate of 19.0%. Throughout the season, Odorizzi has avoided walking batters, allowing just 2.55 per contest.

Today’s matchup between the New York Mets and Atlanta Braves will be their 15th meeting of the season. So far, New York is leading the season series, 8-6. The over-under record in this series sits at 9-4. The average run total in these games is 7.68 runs per game. The averge scoring margin in these meetings is 4.0 runs. Dating back to last season, Atlanta picked up 10 wins compared to 9, taking the season series. The over-under record in last year’s matchups was 7-11, with the average run total being 7.68 runs per game. On average, the winning team won by a margin of 3.47 runs per contest.

Heading into Wednesday’s National League East matchup between New York and Atlanta, the Mets are the favorite on the moneyline. New York will be relying on Max Scherzer to help them bounce back from a shutout loss in Tuesday’s matchup. Even though Jake Odorizzi hasn’t given up a lot of runs lately, he also hasn’t worked deep into games. Look for the Mets to come away with the win, led by another dominant outing from Max Scherzer.