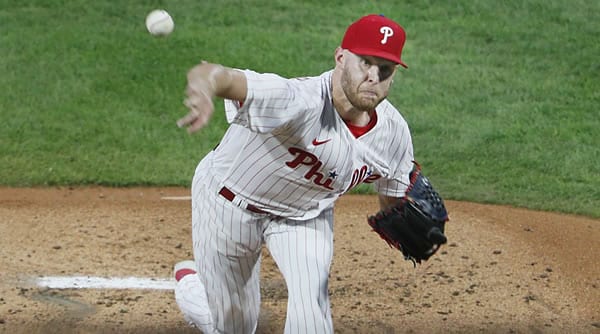 The Phillies continue their quest for a playoff spot while the Mets shoot to stay relevant when they continue a three-game NL East series Wednesday evening in Philly. How are we playing this game with our today’s free MLB pick?

Wednesday’s MLB betting odds opened New York and DeGrom at around -125 over Philadelphia and Wheeler, with an over/under of 7.5 runs. Early betting action then bumped the Mets about a dime, to around -135.

Philadelphia took the opener of this series Tuesday night 4-1. The Phillies scored two runs in the fourth inning and two more in the fifth, then got 3 2/3 innings of scoreless relief from their usually shaky bullpen to secure the victory.

Philly won Tuesday as a +115 home dog on the MLB betting odds, and the game played under a total of 9.5 runs.

Tuesday’s win snapped a three-game losing skid for Philadelphia, over which they scored a total of four runs.

With Tuesday’s loss, the Mets now own a three-game losing skid, during which they’ve scored a total of six runs.

At 24-23 overall, the Phillies sit in sixth place in the National League standings, a half-game behind fifth-place Miami and just one game ahead of San Francisco and St. Louis. If the playoffs started today, Philly would be heading into a three-game wild-card series with the Cubs.

At 21-27, New York trails the Giants and Cardinals by 2.5 games in the battle for the eighth and final National League playoff spot.

The Phillies lead the season series with the Mets six games to two.

Former Met Wheeler is pitching on a few extra days rest, after missing his last start with a sore finger. On the season, Wheeler is 6/8 on quality starts, including four for his previous five. Nine days ago, he gave up three runs and eight hits through six innings, with seven strikeouts against zero walks, in a 9-8 Philly victory over these Mets. And over his last five starts, he’s held foes to nine runs – eight earned – and 28 hits through 32 1/3 innings.

On the season, the Phillies are 6-2 with Wheeler, 3-0 over his last three starts.

Over two starts against the Mets this season, Wheeler’s allowed five runs and 14 hits through 12 innings. Philadelphia won both those games.

DeGrom is 7/9 on quality starts this year, working on a run of five in a row. Last Friday, he held Toronto to one run and three hits through six innings, with two walks and nine whiffs, in an 18-1 New York win. And over his last five starts, he’s allowed seven runs – four earned – and 18 hits through 32 innings, with eight walks and 51 strikeouts.

In his only start, this season against the Phillies, DeGrom allowed just one run and three hits through seven innings, with two walks and 12 K’s, in a 14-1 New York victory ten days ago.

Get expert predictions from our handicapping team: Free Expert Picks!

New York is batting an ML-high .289 against right-handed pitching this season, with a .359 team OBP and a .478 team slugging percentage. Numbers like those help this lineup rank among the top two or three in the Majors in this metric. However, the Mets totally whiffed with RISP Tuesday night, going 0-for-6.

Philadelphia is batting .249/.328/.414 vs. RH pitching this season. This lineup is also operating without OF Jay Bruce, 1B Rhys Hoskins, and catcher JT Realmuto, all out with injuries.

The Phillies pen owns an ML-worst 7.00 ERA and an ML-worst 1.86 WHIP. So this unit ranks among the worst bullpens in Baseball.

DeGrom gets the check-mark in the pitching match-up, New York owns one of the best lineups in the League against right-handers, and the Philly bullpen, despite its performance Tuesday night, is terrible. So we like the Mets. And in knowing they’ll bat nine times, we’ll play New York against the run line. Note: As you may already know, 5Dimes Sportsbook is leaving the U.S. market and is asking all players to withdrawal their balances prior to next week. However, their old sister book BetAnySports will continue to serve bettors. If you haven’t already, get signed up at BetAnySports to be able to keep enjoying reduced odds wagering, which is MUCH better than any sign up bonus you can get!