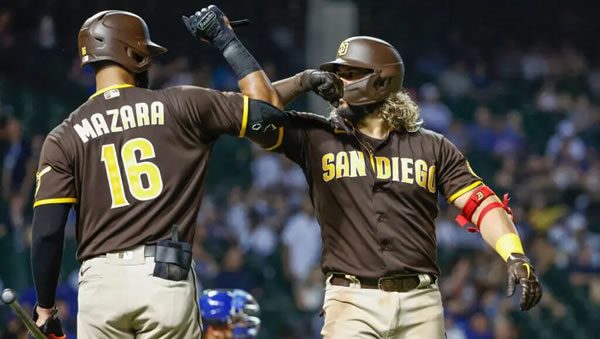 The Padres sure are going to miss the unbalanced schedule going away in 2022 because they’ve been beating the venom out of the Diamondbacks this season. San Diego is 6-1 overall against Arizona, and the Padres haven’t exactly had to survive much in the way of close games. In seven games, the Padres have outscored Arizona by 37-18, and the Diamondbacks have only managed to score more than four runs against Padre pitching once, in a game where the Padres buried them for ten runs.
On the Diamondbacks’ side, it’s yet another team in their own division that they can’t figure out how to handle. One of the reasons that Arizona sunk back to the back of the heap after starting surprisingly well was that the Diamondbacks started playing against divisional opponents, who know them like the back of their hands at this point. Arizona has just 21 wins in its last 84 games against the four foes who make up the NL West, and it’s kind of impossible to gain anything on your division rivals when you keep playing them regularly and lose regularly.

Taking Some Time Away

Whatever the Padres are doing when they get a day away from the baseball field, it’s working. San Diego, for whatever reason, has been outstanding after taking a day off that the schedule provides. The Padres have now won six consecutive games when they had a day off the day before, and that’s exactly what the schedule has given them in this matchup against Arizona. That’s not that surprising: the Padres are a smart, well-run team that usually takes advantage of its chances, so to see them maximizing getting away from the clubhouse makes a lot of sense.
While the Padres will deservedly feel that there’s nothing wrong with exploiting the advantage they have over some lesser teams, the Diamondbacks certainly don’t have the ability to make it up based on current trends: they clearly need something to change in their clubhouse. The Diamondbacks are a mere 8-19 following an off day, so whatever Arizona is doing with their time away from the field’s resulting in problems. When you’re losing 3/4 of your games in a certain situation, you’ve got to change something up to see if that’s causing the issue.

When the Padres missed the playoffs in 2021, I can almost guarantee that some members of the team’s brain trust thought about that and directed the team focus less on the plate and more on trying to build some pitching depth. To bolster their pitching, they actually went out and brought in talent, with one of those being Sean Manaea.
Despite concerns that he could be a short-termer here, he has pitched fairly well since moving to San Diego from Oakland. His ERA isn’t any better than it in the American League, but the Padres’ pitching staff seems to be far more relaxed and effective these days. Since adding Manaea at the start of the year, the Padres have seen their team ERA drop by half a run. Over the course of a year, that can be very significant.

With temperatures hitting 105 degrees in Phoenix on Tuesday, it’s kind of a given that the Diamondbacks are going to close the roof for this game.

With San Diego coming off a day away from the ballpark, you really don’t want to go against them here. The Padres have dominated the Diamondbacks all season long, and they’ve played very well when they’ve been able to rest and collect their thoughts away from the daily grind that is baseball.
The D-Backs might have a slightly better pitching staff, but I think the Padres are the stronger team and should keep routing Arizona. Give me San Diego in this spot. Bet your Padres vs. Diamondbacks prediction and ALL your MLB bets this week for FREE by taking advantage of a 100% real cash bonus on your first bonus up to $500 when you use bonus code PREDICTEM at Betnow Sportsbook!