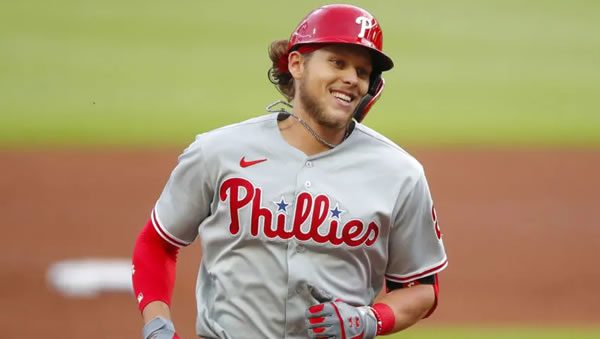 Money Line: Phillies -170 / Reds +141 (Everygame - Go through our special link, use bonus code PREDICTEM after you deposit and they’ll give you a 100% real cash bonus!)

The Cincinnati Reds host the Philadelphia Phillies on Tuesday August 16th at Great American Ball Park. The first pitch in this matchup is scheduled for 06:40 ET. The MLB Odds Board places Philadelphia as the favorite (-170), with an OU line set at 9.5.

In the Philadelphia Phillies’ last game, they picked up a 4-3 win over the Reds. Overall, the team’s pitching staff limited the Reds to 3 runs on 9 hits. The Phillies benefited from an offense that generated 4 runs on 12 hits. In the matchup, Philadelphia was favored at -175.0 on the moneyline. So far, the team has been the favorite in 75 of their games, winning at a rate of 60.0%. This matchup remained below the over-under line set at 9.0 runs. However, for the season, Philadelphia still has an overall over-under record of 56-54-5.

Over the Phillies’ last 5 contests, they have a record of just 2-3. This mark has come on an average run margin of just -8. A key reason for Philadelphia’s recent struggles is an offense averaging just 1.2 runs per game over their last 5 contests, compared to a season average of 4.61. So far, Philadelphia has won over half of their 37 series played, going 18-16-3.

The Reds will look to bounce back from a tight 4-3 loss to the Phillies. Even in the loss, the pitching staff allowed just 4 runs on 12 hits. The Reds’ offense ended the game with just 3 runs on 9 hits. Leading into Cincinnati’s loss, they were the underdogs, getting 145.0 on the moneyline. In their 85 games as the underdog, their straight-up win percentage sits at 39.0%. With this result, the Reds and Phillies combined to fall below the over-under line of 9.0 runs. Cincinnati still has an above .500 over-under record at (57-55-2).

The Reds come into today’s game looking to turn things around, as they are just 1-4 over their last 5 games. This recent slump is backed by a scoring margin of -13 over their last 5 games. Even with their recent struggles, the offense has been steady, averaging 3.4 runs per game. This is right in line with their season average of 4.22. Cincinnati has a below .500 series record of just 11-19-7.

Philadelphia will roll with Kyle Gibson (7-5) as their starter. To date, Gibson has an ERA of 4.29 while lasting an average of 5.51 innings per appearance. Gibson comes into the game with a batting average allowed of 0.239. This season, Gibson has been able to avoid giving up home runs, allowing just 1.11 per 9 innings. In terms of strikeouts, Kyle Gibson has a strong strikeout percentage of 18.0%, including a per game average of 4.14. Command has been a problem for Gibson, as he is giving up 2.52 walks per outing.

The Cincinnati Reds will send T.J. Zeuch to the mound with an overall record of 0-1. To date, Zeuch has an ERA of 13.5 while lasting an average of 4.0 innings per appearance. Opposing teams have hit the ball well against the right-hander, with a batting average of 0.375. Opposing batters have been able to drive the ball with power against Zeuch, averaging 2.25 homers per 9 innings pitched. Zeuch is in the bottom half of the league in strikeouts, averaging just 4.0 K’s per game. This includes a strikeout percentage of 19.0%. Leading into the game, he has shown a strong command of his pitches, averaging just 4.5 walks per contest.

For the season, the Philadelphia Phillies and Cincinnati Reds will be playing their 2nd game of the season. So far, Philadelphia is leading the season series, 1-0. The over-under record in this series sits at 0-1. The average run total in these games is 12.17 runs per game. In these matchups, the average scoring differential sits at 1.0 runs. Cincinnati won last year’s head to head series, grabbing 4 wins to 2. In these 6 meetings, the two teams combined for an over-under record of 4-2. Last year, the Phillies and Reds averaged 12.17 runs per game. On average, the winning team won by a margin of 7.5 runs per contest.

Heading into Tuesday’s matchup between Philadelphia and Cincinnati, the Phillies are the favorite to come away with the win. Even though the Phillies the last game with Gibson on the mound, this was more due to a lack of run support as the right-hander gave up just 2 runs across 6 innings. I don’t expect scoring to be an issue vs Reds starter T.J. Zeuch. I like the Phillies on the moneyline.