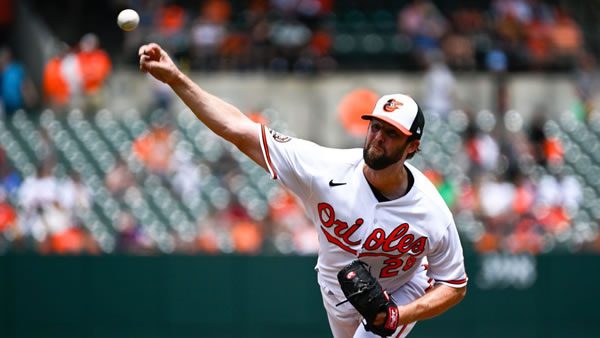 Money Line: Red Sox -110 / Orioles -110 (GTBets - They’ve allowed us to offer our readers a SPECIAL 125% real cash bonus up to $400 in free bets! Must use bonus code PREDICTEM. They also give a free point every time you bet your favorite football/basketball team!)

The Baltimore Orioles host the Boston Red Sox on Friday, August 19th at Oriole Park at Camden Yards. The first pitch in this matchup is scheduled for 07:05 ET. The MLB Odds Board places Baltimore as the favorite (-110), with an OU line set at 9.0.

The Red Sox will look to bounce back from a tough loss to the Pirates by the score of 8-2. In the loss, Boston’s pitchers gave up 8 runs on 10 hits. On offense, the Red Sox finished with 2 runs on 5 hits. This defeat came despite being favored at -155.0. Through 65 games as the favorite, the team has found the win column at a rate of 56%. Together, the Red Sox and Pirates combined to surpass the over-under betting line set at 8.5 runs. The Red Sox now have an over-under record of 54-57-8.

In their last game, the Orioles suffered a 1 run loss to the Cubs by a score of 3-2. Even in the loss, the pitching staff allowed just 3 runs on 8 hits. With their 6 hits, the Orioles could only plate 2 runners. Baltimore dropped the game despite being favored at -165.0. For the season, the team has been favored in 25 games, winning at a rate of 60.0%. With this result, the Orioles and Cubs combined to fall below the over-under line of 9.0 runs. This result comes as no surprise, as the team’s over-under record is just 55-58-5.

In their last 5 contests, the Orioles have just 2 wins, going 2-3. During this time, the team has a run differential of -3. If Baltimore is going to pick up their play, they need to improve their offensive performance. Over their last 5 contests, they are averaging just 3.0 runs per game, compared to a season average of 4.21. On the season, Baltimore has won more than half of their series, going 18-17-4.

Boston will roll with Kutter Crawford (3-4) as their starter. So far, Crawford has put together an ERA of 4.18. In his appearances leading up to today, he has lasted an average of 3.57 innings. Crawford comes into the game with a batting average allowed of 0.231. So far, Crawford has managed to keep the ball in the ballpark, allowing just 1.12 home runs per 9 innings. In terms of strikeouts, Kutter Crawford has a strong strikeout percentage of 24.0%, including a per game average of 3.61. For the season, he has struggled with command averaging 3.2 walks per outing.

In today’s game, Baltimore turns to starter Jordan Lyles. For the year, he has a record of 9-9. Lyles gets the start with an ERA of 4.48. On average, he has lasted 5.59 innings per appearance. Compared to other starters, the right-hander has a high BA allowed of 0.279. Opposing batters have been able to drive the ball with power against Lyles, averaging 1.27 homers per 9 innings pitched. Overall, Jordan Lyles has struck out 19.0% of the batters he has faced. On average, he averages 4.75 K’s per game. Command has been a problem for Lyles, as he is giving up 3.01 walks per outing.

Today’s matchup between the Boston Red Sox and Baltimore Orioles will be their 10th meeting of the season. Currently, Baltimore is winning the season series 5-4. Through 9 games, the series over-under record is 3-5, with the average run total sitting at 10.11 runs per game. In these matchups, the average scoring differential sits at 4.0 runs. Last season, Boston picked up the series win, 13 games to 6. In these 19 meetings, the two teams combined for an over-under record of 8-11. Last year, the Red Sox and Orioles averaged 10.11 runs per game. On average, the winning team won by a margin of 4.63 runs per contest.

Heading into Friday’s AL East matchup between Boston and Baltimore, the over-under total is set at 9 runs. With Jordan Lyles and Kutter Crawford on the mound, this should end as a higher-scoring game than expected. In 2 of Lyles’ last 3 starts, Baltimore and their opponent combined for 10 runs or more. I like the over at 9 runs.

Free MLB Pick: Over 9 Runs. Bet your Red Sox/Orioles prediction and ALL your baseball bets for FREE this weekend by taking advantage of a 100% real cash bonus on your first deposit up to $500 when you use bonus code PREDICTEM at Betnow Sportsbook!