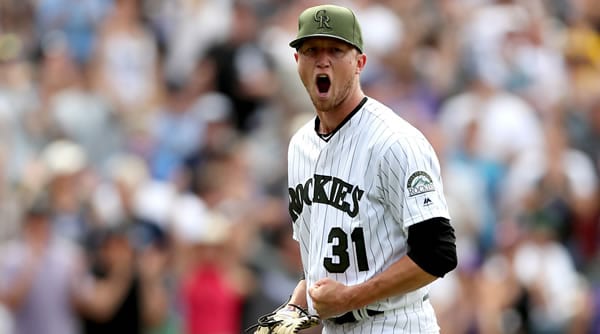 The Los Angeles Dodgers host the Colorado Rockies on Saturday October 1st at Dodger Stadium. The first pitch in this matchup is scheduled for 09:10 ET. The MLB Odds Board places Los Angeles as the favorite (-245), with an OU line set at 8.0.

The Rockies come into this matchup having suffered a 9 run loss to the LA Dodgers (10-1). Colorado’s pitching staff finished the game by allowing 15 hits, leading to 10 runs. On offense, the Rockies finished with 1 run on 7 hits. Colorado’s loss came as the underdog, getting 320.0 on the moneyline. This game went over the posted over-under line of 7.5 runs. On the season, Colorado’s over-under record is 74-76-7.

The Rockies will be hoping to pick up a win in today’s matchup, as they have gone just 0-5 over their last 5 games. In this rough stretch of games, the team’s run differential comes in at -24. Colorado’s offense is in the middle of a cold streak, as their offensive production has dipped to just 3.2 runs per game over their last 5 contests. Colorado’s overall series record is just 19-26-5.

The Los Angeles Dodgers are coming off a big win over the Rockies by a score of 10-1. For the game, the pitching staff held the Rockies to 1 run on 7 hits. At the plate, the Dodgers scored 10 times on 15 hits. Heading into action, Los Angeles was the favorite at -400.0. For the season, the team has been favored in 153 games, winning at a rate of 71.0%. The Dodgers and Rockies went over the run total line set at 7.5 runs. So far, Los Angeles has an over-under record of just 66-79-12.

In their last 5 games, the Dodgers have put together a record of 4-1. During this time, the team’s run differential sits at +15. Los Angeles is still playing winning baseball, even with their offense averaging just 4.6 runs per game, compared to a season long mark of 5.29. On the season, Los Angeles has won more than half of their series, going 38-10-2.

The Colorado Rockies will send Kyle Freeland to the mound with an overall record of 9-11. To date, Freeland has an ERA of 4.69 while lasting an average of 5.63 innings per appearance. Opposing teams have hit the ball well against the left-hander, with a batting average of 0.281. So far, Freeland has managed to keep the ball in the ballpark, allowing just 1.01 home runs per 9 innings. Per game, Kyle Freeland is averaging 4.1, on a strikeout percentage of 17.0%. In his previous outings, walks have been an issue, as Freeland is averaging 2.66 free passes per outing.

In today’s game, Los Angeles turns to starter Michael Grove. For the year, he has a record of 1-0. Grove gets the start with an ERA of 4.07. On average, he has lasted 4.02 innings per appearance. Compared to other starters, the right-hander has a high BA allowed of 0.252. Opposing hitters are hitting home runs at an above-average rate against Grove. This year, he is allowing 1.49 HRs per 9 innings pitched. Grove is in the bottom half of the league in strikeouts, averaging just 3.5 K’s per game. This includes a strikeout percentage of 19.0%. Leading into the game, he has shown a strong command of his pitches, averaging just 2.96 walks per contest.

Today’s matchup between the Colorado Rockies and Los Angeles Dodgers will be their 15th meeting of the season. Los Angeles holds the edge in the series at 9-5. Through 14 games, the series over-under record is 4-8, with the average run total sitting at 9.63 runs per game. The averge scoring margin in these meetings is 3.86 runs. Los Angeles won last year’s head-to-head series, grabbing 13 wins to 6. In these 19 meetings, the two teams combined for an over-under record of 7-12. Last year, the Rockies and Dodgers averaged 9.63 runs per game. On average, the winning team won by a margin of 3.11 runs per contest.

Heading into Saturday’s NL West matchup between Colorado and Los Angeles, the Dodgers are the heavy favorite on the moneyline. Look for Los Angeles to continue their season-long success over Kyle Freeland as they not only come away with the win but cover the runline.