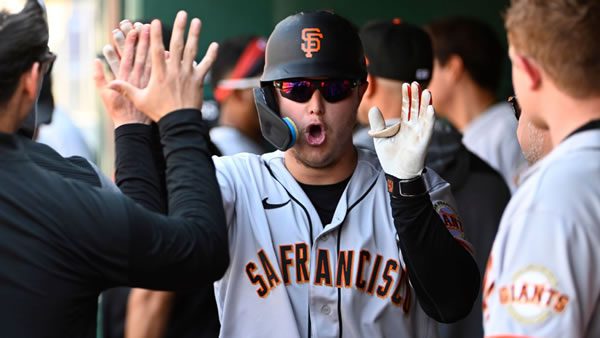 The Atlanta Braves host the San Francisco Giants on Wednesday, June 22nd at Truist Park. The first pitch in this matchup is scheduled for 07:20 ET. The MLB Odds Board places Atlanta as the favorite (-120), with an OU line set at 8.5.

In Atlanta’s last outing, they fell by a score of 12-10 to the Giants. On their way to giving up 12 runs, the Braves staff allowed 14 hits. Offensively, they finished with 10 runs on 12 hits. Atlanta came away with a loss, despite being favored on the moneyline (-182.0). For the season, the team has been favored in 59 games, winning at a rate of 63.0%. In terms of the over-under, the Braves and Giants combined to surpass the line of 9.0 runs. Overall, the team has gone over the betting line in over half of their games, going 37-29-3.

The Braves come into today’s game looking to turn things around, as they are just 2-3 over their last 5 games. Even though Atlanta has notched just 2 in their last 5 games, they still have a positive run differential in this stretch (+1). Even with their recent struggles, the offense has been steady, averaging 4.2 runs per game. This is right in line with their season average of 4.77. Atlanta has a below .500 series record of just 8-8-6.

San Francisco will roll with Carlos Rodón (6-4) as their starter. Through 13 appearances, Rodón has an ERA of just 2.84 while averaging 5.62 innings per appearance. Hits have been hard to come by against the left-hander, as his batting average allowed is just 0.21. In addition, to his strong BA allowed, he has been able to limit power, allowing just 0.49 home runs allowed per 9 innings. On the season, Carlos Rodón has had no problem racking up strikeouts, posting a strikeout percentage of 31.0%. This includes a per game average of 7.0 K’s per game. For the season, he has struggled with command averaging 3.33 walks per outing.

In today’s game, Atlanta turns to starter Charlie Morton. For the year, he has a record of 4-3. So far, Morton has put together an ERA of 5.08. In his appearances leading up to today, he has lasted an average of 5.16 innings. Compared to other starters, the right-hander has a high BA allowed of 0.253. Opposing batters have been able to drive the ball with power against Morton, averaging 1.21 homers per 9 innings pitched. In terms of strikeouts, Charlie Morton has a strong K% of 25.0%, including a per game average of 5.77. Morton comes into the game hoping to improve his walk numbers, as he is averaging 3.48 free passes per outing.

For the season, the San Francisco Giants and Atlanta Braves will be playing their 3rd game of the season. Today’s game will be a rubber match for the two teams, as San Francisco and Atlanta each have 1 win. Through 2 games, the series’ over-under record is 1-1, with the average run total sitting at 6.83 runs per game. The averge scoring margin in these meetings is 1.5 runs. Last year, the team’s split the season series at 3-3. The over-under record in last year’s matchups was 2-3, with the average run total being 6.83 runs per game. On average, the winning team won by a margin of 3.5 runs per contest.

Heading into Wednesday’s National League matchup between San Francisco and Atlanta, the Braves have the slight edge on the moneyline. Even though Charlie Morton is coming off his best start of the year, he had previously given up 4 runs in 4 straight outings. I like the Giants on the moneyline.