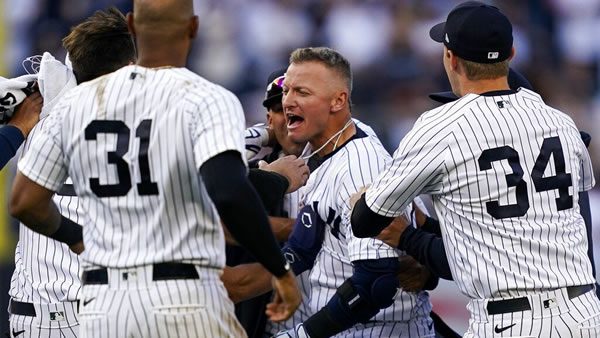 The New York Yankees host the Seattle Mariners on Wednesday, August 3rd at Yankee Stadium. The first pitch in this matchup is scheduled for 01:05 ET. The MLB Odds Board places New York as the favorite (-170), with an OU line set at 7.5.

Seattle looks to keep things rolling after taking down the Yankees by the score of 8-6. The Yankees came up with 10 hits leading to 6 runs against Seattle’s pitchers. The Mariners benefited from an offense that generated 8 runs on 8 hits. Seattle picked up the win, despite getting 145.0 on the moneyline. With the over-under line set at 8.5 runs, the Mariners and Yankees combined to go over this total. Even with this game going over the total, Seattle still has an over-under record of just 49-53-3.

Over the Mariners’ last 5 contests, they have a record of just 2-3. In this rough stretch of games, the team’s run differential comes in at -13. During this stretch, the offense is averaging 3.6 runs per game, similar to their season-long average of 4.06. So far, Seattle has won over half of their 33 series played, going 17-14-2.

The Yankees will look to get back on track after dropping their last game by a score of 8-6 to the Mariners. On their way to giving up 8 runs, the Yankees staff allowed 8 hits. At the plate, the Yankees scored 6 times on 10 hits. New York dropped the game despite being favored at -175.0. So far, the team has won 68.0% of the games in which they were favored. The Yankees and Mariners went over the run total line set at 8.5 runs. Overall, the team has gone over the betting line in over half of their games, going 53-49-3.

In their last 5 games, the Yankees have put together a record of 3-2. Their recent success is backed by an average scoring margin of +13 (last 5). Compared to their season average, the Yankees come into this game swinging the bats well, averaging 7.6 runs per game. On the season, New York has won more than half of their series, going 23-6-6.

Seattle will roll with Luis Castillo (4-4) as their starter. Through 14 appearances, Castillo has an ERA of just 2.86 while averaging 6.07 innings per appearance. Hits have been hard to come by against the right-hander, as his batting average allowed is just 0.201. Home runs have not been an issue for Castillo, as he is giving up just 0.74 HR/9. In terms of strikeouts, Luis Castillo has a strong strikeout percentage of 26.0%, including a per-game average of 6.43. In his previous outings, walks have been an issue, as Castillo is averaging 2.96 free passes per outing.

New York will roll with Gerrit Cole (9-3) as their starter. Heading into the game, Cole has appeared in 21 contests, posting an ERA of just 3.3. On average, he pitches 5.96 innings per appearance. Hits have been hard to come by against the right-hander, as his batting average allowed is just 0.206. This year, home runs have been an issue for Cole. So far, he has allowed 1.29 per 9 innings. Per game, Gerrit Cole is averaging 7.71, on a strikeout percentage of 32.0%. Cole comes into the game hoping to improve his walk numbers, as he is averaging 2.3 free passes per outing.

For the season, the Seattle Mariners and New York Yankees will be playing their 3rd game of the season. Today’s game will be a rubber match for the two teams, as Seattle and New York each have 1 win. The over-under record in this series sits at 1-0. The average run total in these games is 7.14 runs per game. In these matchups, the average scoring differential sits at 3.5 runs. New York won last year’s head-to-head series, grabbing 5 wins to 2. In these 7 meetings, the two teams combined for an over-under record of 2-5. Last year, the Mariners and Yankees averaged 7.14 runs per game. On average, the winning team won by a margin of 3.14 runs per contest.

More Picks: Get our Royals/White Sox Bet Recommendation for 8/3/22 >>>

Heading into Tuesday’s matchup between Seattle and New York, the Yankees are the heavy favorite to pick up the win. However, the Mariners will be hoping that their newest addition in Luis Castillo will help the team make it two-straight wins vs New York. Even with the excitement surrounding Castillo’s debut with Seattle, I expect the Yankees to come out on top. I like New York on the moneyline.