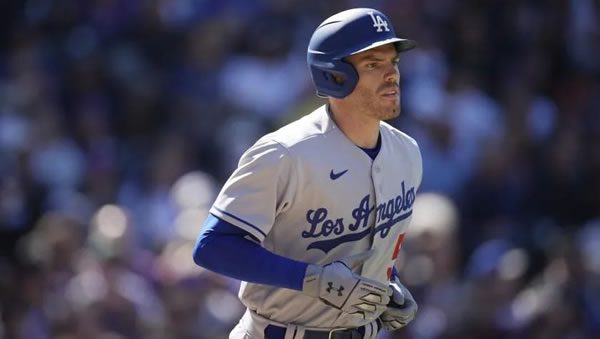 The Cincinnati Reds host the Los Angeles Dodgers on Thursday, June 23rd at Great American Ball Park. The first pitch in this matchup is scheduled for 12:35 ET. The MLB Odds Board places Los Angeles as the favorite (-210), with an OU line set at 9.0.

In Los Angeles’s last game vs the Reds, the Dodgers came away with an 8-4 win. For the game, Los Angeles’s pitching staff allowed 4 runs on 7 hits. The Dodgers lineup had a good night at the plate, coming up with 9 hits, leading to 8 runs. Heading into their last game, Los Angeles was the betting favorite, at -153.0. So far, the team has been the favorite in 66 of their games, winning at a rate of 62.0%. Together, the Dodgers and Reds combined to surpass the over-under betting line set at 9.5 runs. On the season, Los Angeles’s over-under record is 28-34-5.

The Dodgers are looking to continue adding wins, as they are 3-2 over their last 5 games. Over this stretch, the team has a positive run differential at +13. Los Angeles’s offense heads into action averaging 5.4 runs per game in their last 5 contests. Similar to their season average of 5.10. So far, Los Angeles has won over half of their 22 series played, going 14-7-1.

Cincinnati will look to move on from a 4-run loss to the Dodgers, falling by the score of 8-4. Cincinnati’s pitching staff gave up 9 hits, leading to 8 runs for the Dodgers. The Reds’ offense ended the game with just 4 runs on 7 hits. This loss came as no surprise, as Cincinnati came into the game as the underdog, getting 143 on the moneyline. So far, the team has gone into 48 games as the underdog, still finding the win column at a rate of 33.0%. In terms of the over-under, the Reds and Dodgers combined to surpass the line of 9.5 runs. For the season, the team’s over-under record is 37-30-1.

The Los Angeles Dodgers will send Clayton Kershaw to the mound with an overall record of 4-1. In his previous outings, Kershaw has lasted an average of 5.57 innings, putting together an ERA of just 2.08. Hits have been hard to come by against the left-hander, as his batting average allowed is just 0.194. Home runs have not been an issue for Kershaw, as he is giving up just 0.69 HR/9. Kershaw has had trouble generating strikeouts, averaging just 5.71 K’s per game on a K rate of 27.0%. Throughout the season, Kershaw has avoided walking batters, allowing just 1.38 per contest.

Cincinnati will roll with Hunter Greene (3-7) as their starter. To date, Greene has an ERA of 5.26 while lasting an average of 5.0 innings per appearance. Through 13 outings, opposing teams have combined for a batting average of 0.223. Home runs have been a concern for Greene as he is allowing 2.35 per 9 innings. Per game, Hunter Greene is averaging 6.54, on a strikeout percentage of 30.0%. Greene comes into the game hoping to improve his walk numbers, as he is averaging 3.88 free passes per outing.

For the season, the Los Angeles Dodgers and Cincinnati Reds will be playing their 7th game of the season. So far, Los Angeles is leading the season series, 6-0. The over-under record in this series sits at 4-2. The average run total in these games is 8.33 runs per game. In these matchups, the average scoring differential sits at 4.83 runs. When looking back to last season, Los Angeles and Cincinnati split the season series, with each team picking up 3. In these 6 meetings, the two teams combined for an over-under record of 4-2. Last year, the Dodgers and Reds averaged 8.33 runs per game. On average, the winning team won by a margin of 3.33 runs per contest.

More Picks: Get our Cleveland at Minnesota Total Best Bet >>>

Heading into Thursday’s matchup between Cincinnati and Los Angeles, the Dodgers are the heavy favorites on the moneyline. The Reds find themselves in a tough spot, as they are looking to snap a 6 game losing streak but must do against Clayton Kershaw. Look for the Dodgers to pick up an easy win, covering the runline.