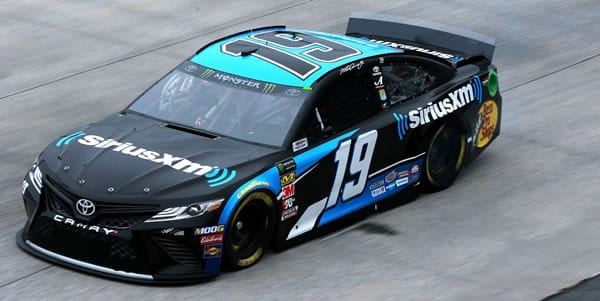 And then there were twelve! The drivers came out of the Roval to set the final twelve spots moving on to the second segment of the Chase. Chase Elliott was the victor followed by teammate Alex Bowman after a caution filled raced on Sunday afternoon at Charlotte Motor Speedway. The race was not a complete victory for many of the drivers, yet there were a few surprises as we closed out the first set of races. Alex Bowman managed to come away with a move to the next stage with that 2nd place finish, which isn’t too shabby considering he was basically on the bubble heading into Charlotte. In fact, all three Hendrick cars moved on to the next segment. It’s only poor Jimmie that didn’t get into the Chase. He also had some difficulties on Sunday as well, being involved in multiple wrecks. Another winner in the move to the next segment was Clint Bowyer. Although he wasn’t much of a contender for the win, he maintained his upfront position for the majority of the race, earning points for third-place finishes in the first two stages. His fourth-place finish earned him a spot in the next stage. Perhaps one of the more humorous (for the fans) stories was that of Michael McDowell. He passed a kidney stone on Friday and then went on to his best finish since Daytona. McDowell went home with a 12th place finish. I guess getting rid of a little extra baggage helped.

There were some drivers with some struggles, though, throughout the race on Sunday. I already mentioned Jimmie Johnson, who was involved in wrecks on more than one occasion. Erik Jones one-upped Johnson with a resulting DNF from an accident. Prior to his race at Charlotte, he was disqualified due to a mechanical failure, which I’m still not so sure I agree with. Regardless of his DNF, that prior disqualification really took him out of contention for the next stage. NASCAR must know something that we all don’t know to automatically disqualify him without knowing exactly what caused that mechanical failure. Unfortunately for Jones, he was actually the only JGR driver to not advance to the next stage. Teammates Truex, Busch, and Hamlin all moved on in their bid for the championship. While a disqualification is a big deal, perhaps the more significant disappointment from the weekend was the temper tantrum thrown by Bubba Wallace after him, and Bowman got into it on and off the track. While Bowman was being treated by medics, Wallace thought it would be a classy move to throw water or some other liquid on Bowman. Not only did it hit Bowman, but it hit the medic and Jeff Gordon. Smooth move, Bubba! He was mad because Bowman wrecked him through the chicane. Maybe Bowman could’ve been a little more patient, but quite frankly, Bubba Wallace could’ve stopped being such a jackass and flipping off Bowman. Wallace has caught some sort of attitude through the season, where he thinks that everyone should bow down to him. I’m not so sure what that’s about, but I hate to break it to you Wallace, you have DEFINITELY not proven yourself yet. Those types of gestures and that type of behavior are pretty pathetic. Handle it like a grown-up. If you don’t like getting wrecked, you better drive faster or move.

Bet on the race winner and driver vs. driver matchups at MyBookie>>>

Where Are Headed These Weekend?

This weekend, the drivers might be able to cool their jets a little bit as they head into Dover. Although I anticipate there still being a lot of competition, road courses tend to make drivers a little battier than usual. The Monster Mile is generally a pretty fun race. While it’s not quite an intermediate track, it’s not quite a short track, so we get the best of both worlds. This place is a 1-mile concrete oval with 24 degrees of banking in the turns and 9 degrees on the straights. With that type of banking, you better believe that the drivers are able to pick up some speed as compared to our typical short tracks. They have the momentum to get in and out of the corners without using the amount of brake required at tracks like Martinsville that are essentially flat. While that’s all well and good, tires tend to take a beating at this place. They’ve done numerous testings here, and have come up with some pretty good compounds, but tires definitely play a role at this track. Another thing about Dover is pit strategy and, quite frankly, getting on and off pit road without incident. Aric Almirola knows all too well how poor pit strategy can cost a driver a move to the next stage. Unfortunately, his crew chief didn’t pit him under the caution on lap 90, whereas most other drivers did. He lost the advantage that he thought he had on the restart. After just four laps, he had fallen too far back in the field when going in to pit on lap 94 that it cost him too many points.

Heading to Dover, the drivers are going to be racing again for that coveted win, but also those stage points. Clint Bowyer proved that those points are invaluable in pushing forward into the next stage. Now, he really needs to focus on maintaining that consistency moving onto Dover this weekend. There are a couple of standouts at this track, in my opinion. Most notably, we have two JGR drivers. Martin Truex Jr. is driving very well as of late. He has two wins in his last six starts here and has finished in the top 5 in all but one of those races. Those are some pretty impressive stats. At 4-1 odds, Truex and Busch are currently your favorites heading into Dover. Kyle Busch is the other teammate that has three total wins here. Honestly, though, I think that Truex will outshine Busch. He’s been driving better than Kyle. That’s not to say that Kyle won’t be a force to be reckoned with, but his performance hasn’t been quite up to par with what we’re used to seeing from him. That said, let’s take a look at your potential winners heading into Dover:

Daniel Suarez has been relatively quiet throughout the season. Dover is a place where he tends to thrive, though. He’s only had a total of 5 starts here, but his worst finish was 11th. He always led 21 laps at the race here in May. With his experience getting bigger and his confidence also growing, I think that Suarez is going to surprise us when we least expect. And with odds at 80-1, he’s worth putting a few bucks on. The return will be huge.

On the other hand, we have Jimmie Johnson with odds sitting at 30-1 currently. If this guy could just stop getting involved in or causing wrecks, yea, that’d be great. While he is a wreck magnet, he also has 11 wins at this track. That’s unprecedented for active drivers. Now, while that may be the case, we have to consider his issues this year…and last. If Johnson can manage to keep a clean car, he might have a shot. He was running exceptionally well at Charlotte on Sunday…until he wrecked…multiple times. Let’s keep that to a minimum, and we might see another win out of this team sooner than we thought. In the end, they will all be chasing Martin Truex Jr. He’s had some very strong runs and victories already in the Chase. I expect there to be more, with this weekend proving to be a continuation. Is he still at the top of the leaderboard? Let’s take a look at your top 12 drivers after the Roval.

Almirola, Jones, Kurt Busch, and Newman fell out of contention after the Charlotte race. Bowman, Blaney, Byron, and Bowyer are all now under the line for the next stage. The drivers will go into the next three races with a lot to accomplish. The thing about the second stage that we’re moving into is that we have the challenge of Talladega as the second race. Talladega is such a crapshoot. You just never know how the day is going to end when you head into those superspeedways. Before we get there, the drivers have to get through the Monster Mile. Stay tuned for a great day of racing at Dover International Speedway!