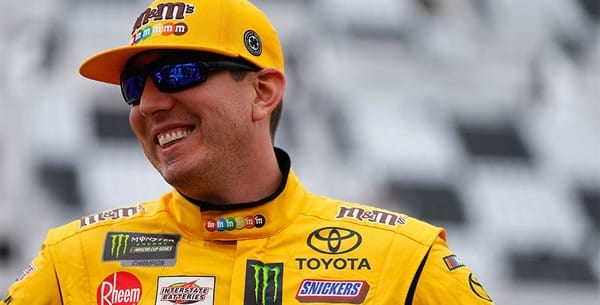 Martin Truex Jr. had the chips fall into place at Las Vegas Motor Speedway on Sunday, coming away with the victory in the first playoff race of the Chase! Lucky for Truex, this locks him into the next segment. What a relief that must be! Truex managed to pull off the win after passing Harvick with 20 to go, leading by a nonchalant 4.1 seconds. Truex didn’t start in front of the field, though. He rallied from the 24th starting position into the top 10 before the first stage ended.

Overall, the race was rather mundane, in my opinion. There were only two cautions outside of the mandated stage cautions. There were a total of 24 lead changes among 14 drivers, mostly stemming from pit stops and different strategies. One of the favorites, Kyle Busch, brushed the outside wall and ended up with a disappointing 19th finish. That is not where he wanted to start off in the Chase, as was evident with his sour-puss interview. The interesting part of the night was when the SHR teams didn’t really live up to the hype. They qualified 1st through 4th, so everyone was expecting quite the show from that garage. Unfortunately, SHR didn’t show up to the game. Kevin Harvick had a solid finish as runner-up, but other than that, Aric Almirola was their best finisher at 13th. Daniel Suarez struggled to keep his speed on the long runs, leaving him in 20th while Clint Bowyer was never a factor coming in 25th. Another team that suffered this weekend were the Gibbs drivers. Coach Gibbs was noticeably surprised by the disappointment but was undoubtedly a motivating coach saying that the guys will find out what went wrong, why it went wrong, and not make the same mistakes moving forward. These teams, who cumulatively won 14 of the first 27 races this season, had finishes of 15th, 19th, and 36th.

I think that there was some difficulty adjusting to a night race at Las Vegas. It was the inaugural race for the South Point 400, with the start time pushed back to make up for football broadcasts and hopes for a bigger crowd. This weekend, though, the drivers and teams head to a track with quite a bit more familiarity. The Gibbs and SHR garages should be happy to be returning to the short track at Richmond. This place is a fun race and a race that many of these teams have great success at. Martin Truex Jr. is coming off a win at Vegas and looking to swing back to the East Coast to continue to bring out the good for Gibbs. Richmond is a bit of an oddity as a short track. It’s not the typical 0.5-mile that we see on so many short tracks. This place is a 0.75-mile D-shaped asphalt track that allows the drivers to build a little more speed than say Bristol or Martinsville. It has a mild 14 degrees of banking in the turns, 8 degrees on the front stretch, and just 2 degrees on the backstretch. These bankings allow for momentum to be carried throughout the track, unlike Martinsville, which is flat and short. This gives the drivers more opportunity to pull away from the field here and not cause so much trouble with the equipment. That’s not to say that tires don’t take a beating, but ultimately track position is vital. Drivers will fight with lap traffic throughout the evening and try their hardest to stay upfront.

With that, I think that we are going to see quite a group of guys fighting for the win. With only three races remaining in this segment, the only surefire way to move on is to get that checkered flag. Kevin Harvick, Kyle Busch, Denny Hamlin, and Martin Truex Jr. are my four strongest picks, but there can only be one. I think that they are going to chase the winningest active driver here with six wins and a sweep last year of the two Richmond races. That comes from none other than Kyle Busch. He’s very clearly the favorite with 3-1 opening odds for Richmond. Quite frankly, Busch performs better when he’s pissed off. Nothing pisses him off more than a bad finish, which is exactly what he got out of Las Vegas. I expect him to be fierce, especially on a Saturday night race. Busch will come in like a wrecking ball without a doubt. Let’s take a look at your potential winners this weekend:

Low Odds: Kyle Busch (3-1). For more conservative bettors, you can bet him head to head vs. Martin Truex Jr. at -155 at MyBookie!

Middle of the Road: Kyle Larson (14-1). You can bet him H2H vs. Chase Elliott at MyBookie as well. See our review of their great sportsbook here: MyBookie Review

I’m honestly a little jaded by Ryan Newman even being in the playoffs, but I guess he made it fair and square just like anyone else. That said, this is a track where he probably has the most potential to make gains and move himself securely into the next round. He’s had a run of top ten finishes in his most recent starts here at Richmond. Who knows? Maybe he’ll pull off the upset and payout a nice little chunk to those willing to put some money down on him with 30-1 odds sitting against him. Kyle Larson won here two years ago and has been having a good run of strong luck for once. I feel like he’s right on the cusp of another win and this might be a long enough short track for him to really use his outside wall skills to pull into victory lane. It would certainly be a sweet victory to propel him into the second segment. Kyle Busch is going to be the class of the field, though. Like I said before, he does not do well with poor finishes and typically comes out of them fighting mad. Let’s see where the points stand after the first race of the Chase:

The following betting odds can be found at BetOnline!

Newman, Busch, Bowyer, and Jones have their work cut out for them. Kurt Busch is probably the likeliest to dig out of the hole on points alone. Ryan Newman can possibly do it as well, but Bowyer is 21 points behind Almirola with Jones 26 points behind. That may not seem like much, but that’s still significant, especially after only the first race of the Chase. This weekend will likely bring some stability to the field as we head back to a familiar track, though. Although Richmond is a short track, it doesn’t have the tendencies of Bristol and Martinsville to cause total chaos and catastrophic damage. This race tends to be cleaner with fewer incidents and straighter quarter panels. Let’s see how these guys do racing this Saturday night at RIR!