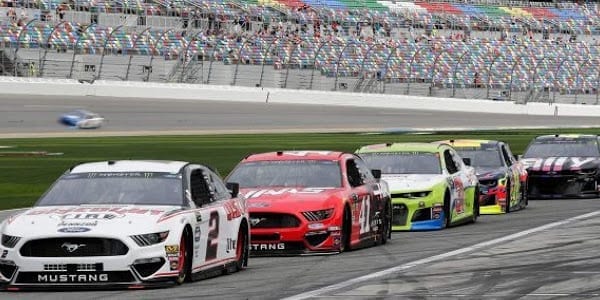 Denny Hamlin had a dominating performance throughout the afternoon at Kansas Speedway, taking the checkers after leading a total of 153 laps out of a total of 277 laps. With only a handful of races remaining, the Gibbs garage is looking pretty resilient at this point. If this win isn’t good enough already, the drivers are heading to one of Hamlin’s favorite tracks this Sunday. Martinsville is the start of a new and very critical stage. Hamlin definitely has an advantage moving forward. Another good thing coming off a win is that the wins are that much more critical now. Homestead is where the cookie crumbles for all but one driver. The only thing that matters there is the win. Edging out the 7th place driver for a few extra points won’t get you the championship at that point.

That said, it definitely played in the hands of Joey Logano, who beat his teammate Brad Keselowski by 9 points to move on to the next stage, leaving Keselowski in the dust. Lucky for Logano, he managed to win the first stage, giving him just enough points to beat out his teammate. He had some struggles in the closing laps, including a spin in the infield after a wreck with Ty Dillon, but he didn’t let the defeat him. He, along with Chase Elliott, and Brad Keselowski were notably in a battle in the second overtime restart fighting for those last two transfer spots. Perhaps the luckiest of them all was Chase Elliott, who came away with the second-place finish, even after starting on the lagging bottom lane. Chase Elliott battled into his way to gain a position moving onto the next stage as we head towards Martinsville. It was quite a nail-biter figuring out who would outrace who to get those two spots. I was actually pretty surprised to see Elliott outrank Keselowski if we’re being honest, but hey, he raced his way in fair and square.

This weekend, the drivers are battling it out on a short track at Martinsville. This is a place where tempers get heated, even more so than at Richmond and even Bristol. Martinsville is the shortest of all of the tracks, with only 800 feet of frontstretch and backstretch. It’s also almost entirely flat. Speed is not the name of the game here. At Martinsville, the drivers must protect their equipment, most notably tires and brakes. These guys are driving hard into and out of the corners at this place, and they’re also dodging lap traffic for much of the race. That’s another significant factor here at Martinsville. These guys have to maneuver through the lap down cars constantly. It honestly doesn’t take long at all before the slower drivers end up going a lap or more down. That said, with this being such a short track, the cars tend to stack up. At places like Richmond, the lap cars aren’t quite as much of a hindrance because there is some more length to the track. At Martinsville, the racing can stay very close, sometimes within just tenths of a second, because the lap cars can cause such a holdup and chaos on the track. After all, they’re racing for position too regardless of what position it is.

Some drivers get tired of that theory. Usually, it’s the first place guy, of course. There are many guys that we can think of as grabbing the win this weekend at Martinsville. Several veteran drivers have very good records at this place. Notably, Denny Hamlin will likely be pushing the favorite odds this weekend at MyBookie. It’s not that he’s just coming off a win, but Hamlin’s record here doesn’t disappoint. Get this…five wins and twenty top ten finishes in twenty-seven starts here. Um, hello? Anyone with a brain would be considered pretty idiotic not to have Hamlin at the top of their lists this weekend. Another driver we have to watch who’s still included in the playoffs is Kyle Busch. With little more than the use of bumpers to pass here, Busch has that skill finely tuned. Busch has the aggressiveness to get what he wants from a track like Martinsville. He’s also got a record of two wins in his last eight starts and three additional top 5 finishes in those races. Finally, the last driver I feel is worthy of putting any detail into is Martin Truex Jr. With top 10 finishes in seven of his last nine starts at Martinsville, the elusive win isn’t far off, in my opinion. I think that we are going to see Truex really push the envelope and try to punch his ticket to Homestead this weekend. Here’s a look at your potential winners this weekend as we head into Martinsville:

I’ve shifted some of these drivers in terms of A, B, or C list based on their current running in or out of the Chase standings. Brad is a strong contender here this weekend, obviously at opening odds of 8-1. He doesn’t care whether or not he’s racing for the championship. In fact, he’s that guy that would probably like to even the playing field and take the win from a Chase driver. Brad has two wins here, and six top-five finishes in his last seven starts. Matt DiBenedetto is going to be my really dark horse pick. Although he’s far from being the favorite or ever on the charts, it’s hard to deny that the guy has talent, and he tends to run pretty well at the short tracks. He’s still got a lot of learning to do, but if there ever was a wildcard, DiBenedetto is that guy. Hey, he’s sitting at 66-1 odds. That’s not the worst in the field by any means. And that might just mean a pretty payday for someone if he fools us all. I just have this weird feeling that someone like him or another non-Chase driver is going to throw a wrench in the standings this weekend. There are a lot of opportunities for something to go awry, and I imagine it happening here. Let’s take a look at your current top 8 in the standings before someone messes it up this weekend:

Blaney is hanging on by the skin of his teeter, as is Kyle Larson. Both of those guys will have a lot to battle against this weekend, being that they are 35 and 32 points, respectively, from the leader. With only four races remaining, and only three until Homestead, it’s crunch time. There’s nothing to lose. We’re getting to the point where wins are everything. There are only so many stage points out there and so many bonus points altogether. There will be a lot of scrambling, a lot of bent fenders, and a lot of tempers flaring if my predictions are correct on Sunday. Stay tuned for a wild afternoon of short track racing at Martinsville!