Basketball Betting – Keep an Eye on the Sacramento Kings 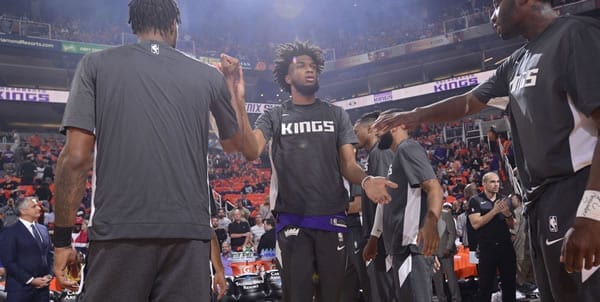 With De’Aaron Fox and Marvin Bagley back on board, it could get FAST

Luke Walton is probably feeling a bit more at ease at the moment. For any coach who’s had LeBron James as his star player and No. 1 option, as he did in Los Angeles, it’s kind of a double-edged sword. As VietBet customers know, James brings with him the element of winning; with his championship rings and streak of Finals appearances, that much is well-established.

But at the same time, when things don’t completely fall into place, the head coach, who probably didn’t have a lot of control, to begin with, becomes a scapegoat. Throw in other factors like having to deal with Lonzo Ball and his family, not to mention the natural spotlight shining on anything that’s in Tinseltown, and you can easily have the makings of an uncomfortable situation.

Walton, who was coaching for a Lakers franchise he previously played for (and won two titles with), didn’t seem long for the job, almost from the start, as most people knew that LeBron had his own personal favorite in Tyronn Lue (who didn’t ultimately wind up the job, as we know by now). LeBron has said that Walton “did as great of a job as you could under the circumstances.” And he’s probably right because those circumstances got rough for him. There was a power struggle between Jeanie Buss and Magic Johnson (who was no fan of his) about his firing, and then, three days after Magic’s resignation, Walton resigned too.

But he had to be at least a little happy about getting away from that circus. He seems to have landed on his feet with the Sacramento Kings (of which Shaquille O’Neal is a part-owner), who are making some strides under his leadership.

It also didn’t hurt his peace of mind that a woman who had accused Walton of sexual assault recently dropped the lawsuit against him.

The Kings are in turnaround mode

Walton has talent in Sacramento, but he’s been without some of it for most of the schedule. De’Aaron Fox, a scoring-minded point guard, was out of action beginning November 8 with an ankle injury, and Marvin Bagley, the second overall selection in the 2018 draft, missed 22 games with a thumb injury.

Fox is returning, and Bagley has already come back to the lineup.

In the meantime, Walton’s team improved its record to 12-14 straight-up (16-10 against the spread) when it registered a 100-79 victory over downtrodden Golden State on Sunday.

That win also continued a trend that is sizzling for them at the moment, because they are now 11-4 against the number as a road team.

Yes, they’re under the .500 mark, but it’s still encouraging in the sense that it brought Sacramento into sole possession of seventh place in the Western Conference. In other words, they are in the playoff queue, something that has been foreign to this franchise in recent years. And you know what? If they hadn’t have blown a 16-point lead in a loss to the New York Knicks, of all people, they would have been taking a five-game winning streak out of San Francisco. No, they’re not going to win the NBA title, or even contend (250-1 to win the West at VietBet). But they’re trending upward.

What’s with the slowdown?

Interestingly enough, the Kings, who were third in the league in the “Pace” category last season, were dead last this year upon taking the floor against the Warriors. In case you’re not familiar with it, “Pace” measures the number of average possessions per 48 minutes for each team. So that basically means that a team, or its opponent, is playing slower, or maybe a combination of both.

In this particular instance, it might be the “combination” of the two that we’re talking about. Walton is trying to bring more of a defensive culture to the situation, and it’s going to be an uphill battle; Sacramento is allowing just below 47% shooting from the field. But he stresses that the Kings are making opponents work a little harder to get good shots on each possession.

And the absence of Fox, who may be as quick with the basketball as anyone in the NBA, probably slowed the offense down and made it more deliberate. And let’s not forget that Cory Joseph, who has been filling in much of the time, isn’t a bad defender.

It will be interesting to see what develops with the totals that are posted by the oddsmakers at VietBet, because the pace can’t help but quicken with Fox bringing the ball down the floor. He was, after all, third in Pace at the point guard position last season.

Thus far, the slow nature of the Kings has been, well, too fast for the folks making the lines to catch up to, as they played 17 of the first 26 games under the total.

In returning, Fox sees as his role “to create shots for everybody else, obviously keep that defense up ……..and just pick up the pace a little more.” Bagley may also get starts at the center spot, and that can’t help but make things faster too. He’s not a natural “5” player, as Richaun Holmes, a fourth-year man out of Bowling Green, has been a pleasant surprise at the position. But he is ideal for a “small” lineup Walton wants to implement.

And hey, listen - it hasn’t necessarily been Walton’s objective to play slow. And if you know anything about Kings principal owner Vivek Ranadive, you know he isn’t interested in a slog either; witness the hire for his G-League team in Reno in 2014 - David Arseneault Jr., who runs the “Grinnell System” (look it up).

Walton believes that his team can do a good job getting out and running, especially in transition situations after a defensive stop. It’s just that he wanted to give certain things more priority. Things like defense (not really part of the Grinnell System - look it up).

Walton - don’t expect miracles with Bagley and Fox together

He is convinced that once Fox and Bagley are on the court together for some length of time, that’s going to happen a lot more. But he warns that things might be a little sloppy at first while they get re-accustomed to each other and everyone else. This team, without Fox, committed 29 turnovers even in the process of winning by 25 at Golden State (which may be an indication of how bad the Warriors are right now).

And when we say “everyone else” we’re primarily talking about Buddy Hield, who is something of a scoring machine when he gets a little momentum behind him. Hield, who won the Wooden and Naismith awards in his senior year at Oklahoma, leads the team at 21.9 points per game, and he’s got a Usage rate of 28.1%. So like Fox and Bagley, he needs the ball.

And that will be a challenge moving forward. Somebody has to be the distributor. Fox takes a lot of shots, but his penetration skills are going to be an asset in finding his teammates, who also include Harrison Barnes and three-point marksmen like Bogdan Bogdanovic and Nemanja Bjelica. Like we (and Walton) said, be somewhat careful with these guys just coming together again because it might look a little ugly at first. But once they get some practices under their belts, you might see something a lot more explosive than you’ve seen thus far….and hopefully just as profitable.

VietBet gives you a lot of great choices in NBA betting, including reduced juice, which can give you a better price than the customary -110 you have to lay on basketball…… After the game starts, you’ll have lots of thrills wagering in real-time with Sports Betting Ultra, and it’s really easy to get an account opened. All you need is your debit card, credit card, person-to-person transfer, or the virtual currency of Bitcoin, which is fast and easy with their automated system, and NEVER incurs a transaction fee!

Sign up for an account through this site and use the bonus code of PREDICTEM, and it will be good for a 50% Welcome Bonus up to a $1,000 Deposit! Also, you might want to consider checking out our review of their sister book BetAnySports. They too offer -105 odds and FAST payouts!