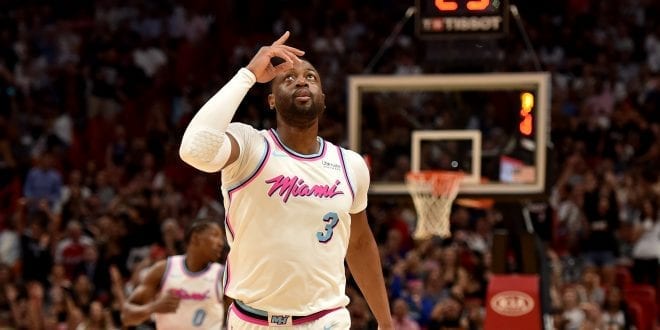 Strangely enough, these teams literally met on Monday night, a game the Celtics ended up winning by 5 points. Not to brag or anything, but I covered this previous game and successfully predicted that the Heat would keep this game close enough to cover the 7-point spread. My opinion will not change as the series shifts to Miami because this game means even more to the Heat and their playoff chances since they dropped said game in Boston the other night.

The Heat are still clinging to a half game lead over the Orlando Magic for the final seed in the Eastern Conference. Keep in mind that the Heat are also only 1 game behind the Pistons for the 6th seed and half a game behind the Nets for the 7th seed. Stealing one of these higher seeds could give the Heat a legitimate shot of taking down the 2 or 3 seed. However, if they finish 8th … The Buck stops there.

The Celtics are clearly locked in as a playoff team. The challenge for them is whether or not they can secure home court advantage for the first-round. Currently the Celtics are tied with the Pacers for the 4th seed, and currently hold the tiebreaker. This makes Wednesday’s matchup even more important for the Celtics, especially with a game against the Pacers looming later this week.

Starting with the Celtics, Al Horford, Marcus Morris and Jaylen Brown are all player statuses to keep an eye on as they will move the line. Horford is dealing with left knee soreness and is listed as probable. Marcus Morris is also dealing with left knee soreness, but he is listed as questionable. As for Jaylen Brown, he is suffering from lower-back spasms and is doubtful for this game with the Heat.

The biggest injury to watch for the Heat is Josh Richardson. Richardson is dealing with a left-heel contusion and has already missed the last three games. This would be a huge blow to the Heat if he can’t go as he is averaging 16.7 points per game this season and is their top scorer.

As I said earlier, I love the Heat in this matchup. This mainly has to do with the fact that they are 5-0 ATS against the Celtics in their last 5 meetings. Also, they are 2-0 straight up in their last 2 games against the Celtics that were played in Miami. As for bettors who prefer to wager the total, the over is 19-7 in the last 26 games played in Miami and 9-3 in Boston’s last 12 games overall.

Dwayne Wade. There is no question that Wade has had an amazing career. He even was honored the other night in Boston with it being his last game in the Garden. Now he returns home to face the Celtics for what is likely going to be the last time. Wade had 17 points in Boston, but I am expecting an even better game this time around and put up at least 20. Wade’s leadership will be on display and he is poised to carry this Heat team on his back to clinch a playoff spot.

Can the Celtics Limit the Heat in the Paint?

A huge part of the game on Monday was the difference in points in the paint. The Heat scored 56 while the Celtics had just 28. They crazy thing is, they held Hassan Whiteside to just 3 points. This is a huge concern especially heading into the playoffs where interior defense is exponentially important. Granted the Celtics were able to just out-shoot the Heat. With big men like Al Horford and Marcus Morris in question, stopping the Heat in the paint will be vital to their chances of winning and covering.

Looking at the box-score from Monday, Dragic was clearly the best player for the Heat. He posted 30 points in this game and shot 12 of 20 from the field. Behind him was Bam Adebayo, who scored 19 points. This leads me to my next point of where was Hassan Whiteside? The Miami Center had just 3 points on Monday and shot 1 of 4 from the field. It is clear Whiteside has not had as much of an impact this season compared to previous years, but with it being the last week of the season, Miami will desperately need Whiteside to contribute. If Whiteside can play like his old self, the Heat will be in an excellent position to cover in this game and win outright.

Miami managed to cover on Monday despite being down by as many as 23 points at one time. They certainly had a chance to win, but a few defensive mistakes cost them in the end. Now with this game being played in Miami, the Heat must ramp up the intensity with their playoff hopes on the line. I believe they will do just that and will once again play up to the Celtics talent level. My best bet for this game is for the Miami Heat to cover for the second game in a row with the Celtics and also like them on the money line to win outright.

TIRED OF YOUR CREDIT CARD NOT WORKING AT ONLINE SPORTSBOOKS? IT WILL AT MYBOOKIE+ GET a $1000 Free Play!