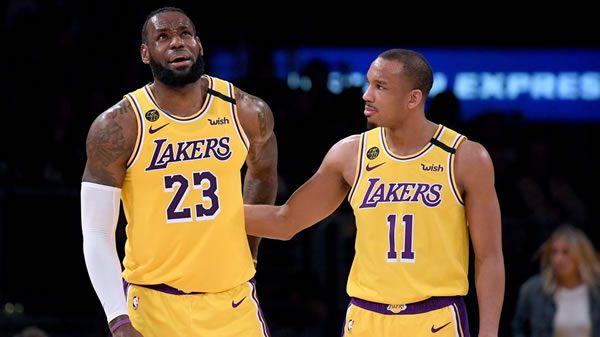 The Los Angeles Lakers enter today’s game, having won 2 straight games. The Lakers have played above .500 basketball in their past ten contests, going 6-4. Los Angeles travels to Dallas with a plus-minus rating of -0.7 points as the road team. Overall the Lakers are ranked 18th in point differential (2.1). Among NBA teams, they have played the 30th toughest schedule.

For bettors, taking the Los Angeles Lakers to cover the spread has been a losing bet as they are covering in 39.30% of their games. Their season-long plus-minus against the spread is -2.8.

On offense, the team’s leading scorer is PF Anthony Davis. So far, Davis is averaging 24.0 points per game while adding 10.16 rebounds. The Lakers’ most productive three-point shooter has been LeBron James, connecting on 2.75 shots from downtown per game.

The Dallas Mavericks enter today’s game, having won 2 straight games. In their past ten contests, the Mavericks have played slightly below .500, going 4-6. On the year, they have played the 19th toughest schedule. As the team gets set to host the Lakers, Dallas has a home plus-minus of 0.7 points. Overall, the Mavericks are ranked 16th among NBA teams in point differential (1.6).

For bettors, taking the Dallas Mavericks to cover the spread has been a losing bet as they cover 44.40% of their games. Their season-long plus-minus against the spread is -1.5.

On offense, the team’s leading scorer is SF Luka Doncic. So far, Doncic is averaging 25.62 points per game. Doncic is also connecting on 2.71 three-point shots per game. Dorian Finney-Smith has been in charge of cleaning up the glass, hauling in 4.59 boards per game.

Even though the addition of Russell Westbrook has not paid huge dividends in the win column, it has led to LA playing at a much faster pace. After finishing last year as one of the slower teams in the NBA. This year’s Lakers squad is ranked second, averaging 100.8 possessions per game. On the other side, Dallas would prefer to slow the game down as they are ranked 29th in pace. This deliberate style of play is most reflected in their two-point field goal attempts. So far, the team is ranked 26th, at 49 shots per game inside the arc.

In terms of the strength of each team, the Lakers and Mavericks are complete opposition. On the season, Dallas has struggled to score the ball, ranking 26th at 104 points per game. However, because they do a good job limiting their opponents to a below-average number of free throws and three-point shots, they are ranked 6th in scoring defense. If they want to take care of business at home, they will need a quality defensive performance against a Lakers team averaging 111 points per contest.

Tonight’s matchup will be the first meeting of the season between these two teams. Last year, the Mavericks took 2 of 3 games. In Game one of last season’s series, the Lakers put up 138 points in their only win vs. Dallas.

How the Public is Betting the Warriors vs. Knicks

56% are betting the Warriors against the spread.
54% are wagering on the game to go Over the posted total of 216

In this matchup, look for the Lakers to come out on top in what should be a close game. I expect LA’s up-tempo style of play to cause problems for a Dallas team who prefers to slow the game down. Even though the Mavericks have a good statistical defense, much of this is predicated on limiting possessions. I also see this game as being a candidate to go over the point total of 216.

Even though I see his team finishing on the losing end, I like Luka Doncic to have a big statistical night. Look for Doncic to flirt with 30 points as he tries to will his team to a win.