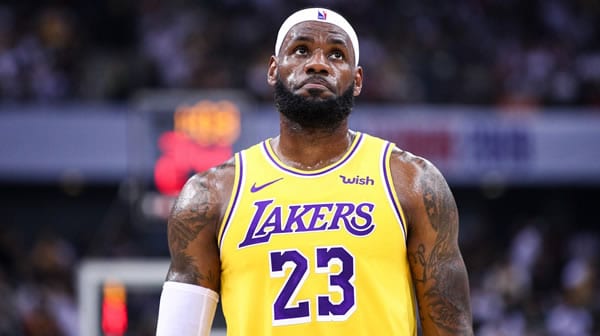 The NBA playoffs give us a match-up of the ol’ veteran against the young gunslingers as LeBron James and his defending champion Lakers begin a first-round, best-of-seven Western Conference series with the suddenly dangerous Suns Sunday afternoon in Phoenix. The Suns might own the home-court advantage for this series, but Los Angeles is favored to win it by a price of -165, with Phoenix getting around +145. Here’s what we’re looking at when handicapping this game, with our free NBA playoffs betting pick at the end.

The NBA playoffs betting market opened Phoenix at -3 for Sunday’s game, with an over/under of right around 214. Early betting action then dipped that total to 213.

Bettors will to eschew the points could get LA at upwards of +130 to win this game outright.

Los Angeles rides a six-game winning streak into Sunday after beating Golden State in one of those goofy “play-in” games Wednesday night 103-100. The Lakers trailed 15-4 out of the gate and 55-42 at the half, then used a 45-25 run to lead by seven early in the fourth quarter. But they couldn’t put the Warriors away. Ultimately, James threw in a desperation 3-pointer that broke a 100-100 tie with just under a minute to go, and LA hung on from there for the victory.

However, Los Angeles came up a bucket short of pushing the spread as a five-point favorite.

LA shot just 41 percent from the floor Wednesday and made only 10/31 three-pointers. But the Lakers out-rebounded Golden State 49-46 and won the turnover battle 20-13.

Los Angeles stumbled through a 9-17 stretch from late March into May, thanks mainly to injuries to some key people, then won its last five regular-season games.

With Wednesday’s win/non-cover, the Lakers are now 22-10 SU but only 14-18 ATS when both James and Anthony Davis play this season.

Phoenix, meanwhile, played 51-21 this season, finishing just one game behind top-seeded Utah in the Western Conference race. The Suns started 8-8 this season, then played 43-13 from there. Phoenix ended its regular season with three straight wins, most recently beating San Antonio last Sunday 123-121.

So the Suns are back in the playoffs for the first time since 2010.

Phoenix was also the second-best team in the Association to bet on during the regular season, going 42-28 ATS. Only New York, at 45-26 ATS, fared better at the betting window.

On the injury front, Phoenix C Deandre Ayton (14 points, 11 rebounds per game this season) missed the last three regular-season games with a sore knee, but he’s listed as probable for Sunday’s game.

The Suns took the season series from the Lakers this year two games to one. Phoenix won the first match-up back in early March 114-104, a game Davis missed due to injury. The Suns then beat LA three weeks later, 111-94, a game both James and Davis missed. The Lakers then defeated Phoenix two weeks ago 123-110, with Davis but without James.

The Suns shot a combined 49 percent from the field over those three games, while Los Angeles shot 48 percent. And the rebounding was just about even, too.

Unders are 43-28 in Lakers games this season.

Overs played 2-1 in Lakers-Suns games this season, which averaged 219 total points against an average over/under of 217.

Phoenix is a chic pick to click for many NBA betting “experts” here, the new kids on the playoff block going against the Old Man. But when fully healthy, Los Angeles is the better defensive team and does a better job on the boards. Plus, playoff experience can go a long way in a spot like this. This series will be far from over after this Game 1, but we’re going with the Lakers here for our free NBA playoff pick for Sunday. Bet the game LIVE in-progress at a sportsbook where your credit card WILL work for deposits and where you’ll receive a generous 50% real cash bonus: Bovada Sportsbook!