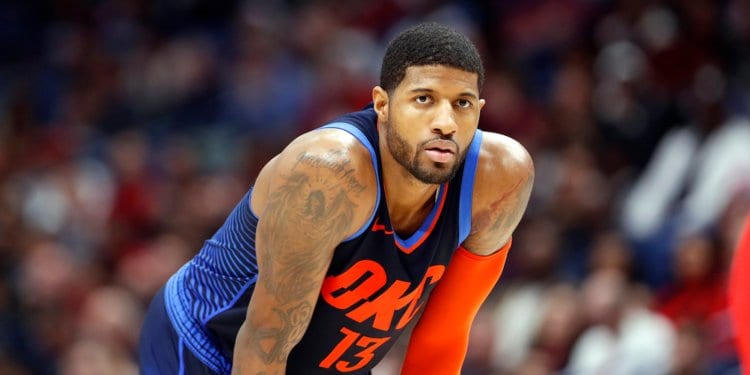 The Lakers officially will have a losing season after having lost their 42nd less than a week ago. Since then, they have won two games in a row, doing so without LeBron, who will miss the remainder of the season. These last 5 games will mean absolutely nothing for the Lakers, but if they can win all 5, they can at least they end on a high note…even if no one is listening.

Speaking of their last game, the Lakers decimated the Pelicans 130-102. While it was impressive to see the Lakers put up 130 points, the Pelicans are also in “tank mode” so they did not play their superstar, Anthony Davis. Maybe if the Lakers gave the effort they did in this game all season, they would not be in this situation , but nonetheless they will have to deal with yet another losing campaign.

The Thunder are in a free fall now, losing their last two games in a row. These losses came to Denver, who is battling for the one seed but also, they most recently lost to Dallas, who is well out of the playoff conversation. The Thunder are now the 8th seed, and while they cannot drop out of the playoff picture, being the last seed does not bode well for a deep title run. Luckily for the Thunder, they are tied with the Spurs for the 7th seed, so it will be vital that they finish the season on a winning streak if they want to avoid what is most likely going to be the Golden State Warriors in round one of the playoffs.

The first thing to point out is these teams have met twice this year, with the away team having won both meetings. Going back further than just this year, the Thunder are 6-4 straight up in the last 10 overall meetings and 4-2 at home in their last 6 meetings in Oklahoma City.

The Thunder are coming off a close loss to the Mavericks and trends show us that they are 17-15 overall in their next game after a loss. More specifically, this loss was by 3 points and the Thunder are 2-1 straight up and against the spread after a close loss. The Lakers are coming off a blowout win, and they are 15-20 overall in games following a win. When the previous win comes by a margin of 20+, the Lakers are 0-2 on the road. Against the spread, the Lakers are just 1-1 in away games after a blowout win.

Los Angeles will Cover if:

They force the thunder to turn the ball over at a high rate. The Lakers are obviously out-manned in this game with all their injuries and the shutting down of James. That said, they were still able to force 24 turnovers on the Pelicans, which led to their blowout win. The problem is forcing Westbrook to be sloppy will be much harder than the the ball handlers on the Pelicans. By creating these turnovers, it will allow the Lakers to take possessions away from the Thunder and will give them great scoring chances in transition. Couple the turnovers with a three-point performance like they had in New Orleans and the Lakers will be able to keep this game a lot closer than experts may believe.

Speaking of this three-point performance, the Lakers were able to make 15 threes against the Pelicans. Sure, they took 38 shots and only had a percentage of 39.5%, but still 45 points from behind the arc is a ton and is what they need if they are going to cover against the Thunder.

Oklahoma City will Cover if:

Their bench production increases. Against Dallas, the starters literally did about 86% of the scoring. Meanwhile, the bench had three players score for a total of 14 points. Maybe this will work against a team as bad as the Lakers, but, realistically the Thunder need to be thinking about the playoffs and having no bench scoring will likely result in an early exit. This means guys like Dennis Schroder must play better as Russell Westbrook cannot always be on the court. For example, if Westbrook gets in foul trouble, who will the Thunder turn to? Schroder has proven he can be a guy that takes over games but shooting 3 for 11 from the field and 1 of 6 from the three-point line will not cut it with the playoffs approaching. Yes, this game is against the Lakers, so the scoring from the starters alone will likely be enough to put them down, but at this point in the season, the bench needs to be getting valuable minutes to keep them fresh and to also keep the starters from picking up any injuries.

It is down to crunch time for the Thunder and seeding is everything in the playoffs. 5dimes has the Thunder as a 12.5 favorite and my initial lean is on the Thunder to bounce back from an embarrassing loss to the Mavericks. Considering the Lakers are not playing for anything, my pick is for the Thunder to blow out the injury riddled Lakers with the intention of challenging the Spurs for the 7th seed in the Western Conference.