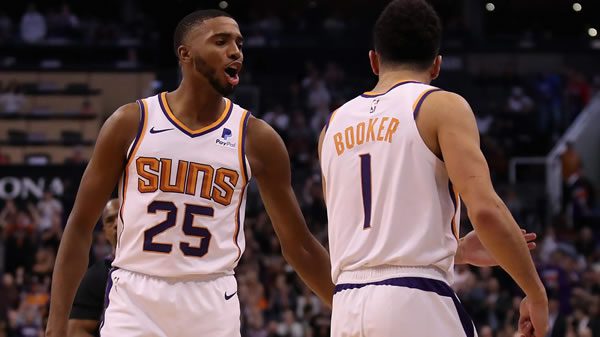 The Phoenix Suns host the Dallas Mavericks in a Western-Conference matchup. Tip-off is set for 10:00 PM ET at the Footprint Center.

The Dallas Mavericks come into this game with an overall record of 52-30, placing them 4th in the Western Conference. So far, Dallas is above .500 on the road, holding a record of 25-21. Over their last five games, the Mavericks have played well, picking up 3 wins. In this stretch, Dallas’s offense is scoring right in line with their season average, putting up 107.0 points per game. Combined, the Mavericks’ last five opponents are giving up 108.0 points per contest. The Mavericks have been picking up wins, while holding opponents to an average of 108.0 points per game, similar to their season average of 104.6. In the Dallas Mavericks’ most recent game, Dallas took down Phoenix by a score of 111-101

The Phoenix Suns come into this game with an overall record of 64-18, placing them 1st in the Western Conference. So far, Phoenix is above .500 at home, holding a record of 36-10. The Suns have played well over their last five games, picking up 3 wins. In this stretch, Phoenix’s offense is scoring right in line with their season average, putting up 112.0 points per game. Combined, the Suns’ last five opponents are giving up 106.0 points per contest. The Suns have been picking up victories while holding opponents to an average of 109.0 points per game, similar to their season average of 107.6. In the Phoenix Suns’ most recent game, the team fell to Dallas by a score of 111-101.

Heading into today’s matchup, the Dallas Mavericks and Phoenix Suns have met up for 7 games. In their last meeting, Dallas picked up a 111-101 win.

67% are betting the Suns against the spread.
52% are wagering on the game to go over the posted total of 213.5

Heading into game 5 of this Western Conference semi-finals series between Phoenix and Dallas, look for the Suns to get back on track and pick up the win at home. In the first two games of this series at the Footprint Center, Phoenix scored 121 and 129 points, respectively. Look for a bounceback performance from Chris Paul as he continues his quest for his first NBA title. I like the Suns to cover the spread at -6.5. Bet your NBA playoffs picks for FREE today by taking advantage of a 100% REAL CASH bonus on your first deposit of $100 to $300 at MyBookie Sportsbook! (Must use bonus code PREDICT100).