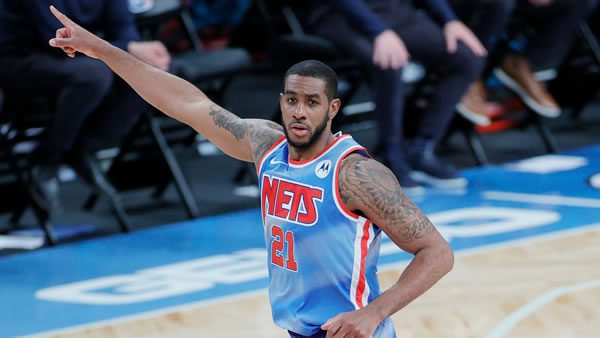 The New York Knicks enter today’s game, winning five of their past ten games. When playing away from home, New York is an above .500 team, having gone 6-3. As the road team, the Knicks travel to Brooklyn with a positive plus-minus rating of 4.0 points. Overall the Knicks are ranked 15th among NBA teams in point differential (1.7). Among NBA teams, they have played the 25th toughest schedule.

For bettors, taking the New York Knicks to cover the spread has been a losing bet as they have covered the spread in 45.00% of their games.
Their season-long plus-minus against the spread is -3.0.

On offense, the team’s leading scorer is PF Julius Randle. So far, Randle is averaging 23.0 points per game, placing him third among power forwards. Randle is also the team leader in rebounding at 10.15 boards per game. New York’s best three-point shooter has been Evan Fournier, connecting on 2.55 shots from downtown per game.

The Brooklyn Nets enter today’s game, having won seven of their past ten games. When playing at home, the Nets are an above .500 team, having gone 6-4. As they get set to host the Knicks, Brooklyn has a positive home plus-minus of 1.5 points. Overall the Nets are ranked 6th among NBA teams in point differential (4.8). This has come while playing the 17th toughest schedule in the NBA.

For bettors, taking the Brooklyn Nets to cover the spread has been a losing bet as they have covered in just 42.10% of their games. Their season-long plus-minus against the spread is -1.6.

On offense, the team’s leading scorer is SF Kevin Durant. So far, Durant is averaging 28.5 points per game. The Nets’ best three-point shooter has been Patty Mills, connecting on 3.2 shots from downtown per game. From the guard position, James Harden has been in charge of cleaning up the glass, hauling in 7.85 boards per game.

A hallmark of Tom Thibodeau coached teams is that they will be among the slowest-paced teams in the league. So far, the Knicks are averaging 97 possessions per game, 22nd in the NBA. On the other side, Brooklyn looks to play a more up-tempo style of basketball. Most of their additional possessions go towards looks at the three-point line as their 12.9 shots per game place them 9th in the league. The Nets are also the 8th ranked team in free-throw attempts per game.

The big surprise around this year’s Nets team is their willingness to defend. Heading into their matchup with the Knicks, Brooklyn is the 9th ranked defensive team. So far, they are giving up an average of 105.4 points per game. The stat that jumps off the page is their opponent’s three-point percentage at just 30%. For The Knicks, they have struggled to defend the three-point shot as opponents are connecting at a rate of 34%. However, they are the number one rated team at defending shots inside the arc.

This matchup between the Nets and Knicks will be the first of the season. Last year, these two teams met up for three games, with Brooklyn taking the series 3-0. However, each of these games was fairly close, with the largest margin being just 7 points.

How the Public is Betting the Knicks vs. Nets

53% are betting the Heat against the spread.

In this game, I anticipate seeing a three-point barrage from Durant and the Nets. For Brooklyn, there is no reason to challenge the Knicks inside. With James Harden not getting to the free-throw line at his usual rate, it is an easy decision to remain on the perimeter. Even though Harden has not hit threes at a high rate, he remains one of the league’s premier outside shooters. With the Nets’ newfound ability to defend, I expect this game to finish in a significant win for Brooklyn.

In this game, I recommend taking both Kevin Durant and James Harden to go over their play prop lines. Both players should get some additional looks beyond the arc against a team that has yet to slow anyone down from outside. Bet your Knicks vs. Nets prediction and ALL your NBA picks this week for FREE by taking advantage of a 100% REAL CASH bonus on your first deposit of $100 to $300 at MyBookie Sportsbook! (Must use bonus code PREDICT100).