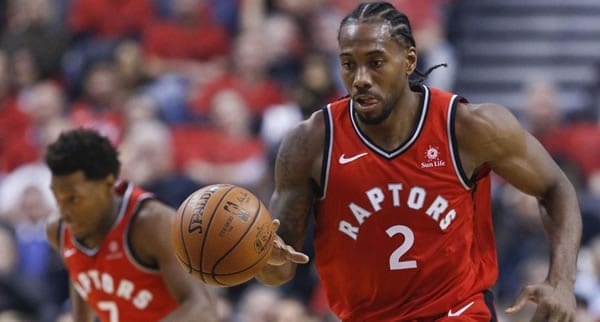 Takeaways From Toronto and Milwaukee’s Most Recent Games

It was all academic in the Eastern Conference Semifinals for the Deer as they completed a “Gentleman’s Sweep” of the Boston Celtics (the preseason favorite to win the East), defeating them in five games. The Bucks were last in action last Wednesday when they hosted the C’s and outright hosed them by a score 116-91. Milwaukee was easy money closing as an 8.5-point favorite and produced their fourth consecutive win and cover.

The Raptors come in off a thrilling 92-90 win in on Sunday against divisional rival Philadelphia to punch their ticket to the Eastern Conference Finals. In what was a series that went the distance, Game Six was literally settled by inches as Kawhi Leonard’s buzzer-beater game-winner took a fortuitous bounce into the hoop to send the Sixers off in heart-breaking fashion. Toronto failed to cover as they closed a 6.5-point favorite.

How the Public is Betting Game One

At the moment, 59% of the consensus like the Bucks here as the favorite. As a result of this lean, we have seen the market move upward by half of a point from Milwaukee opening a six-point favorite.
Speaking of betting - If you’re looking to start betting online or maybe add another another sportsbook to shop lines, then you must check out our list of Top Sportsbooks for 2019.

The Raptors and Bucks have met four times this season, and the Bucks won three of those meetings. The two sides last met on January 31st in the Great White North where the Bucks staged a 105-92 upset when they closed as a 2.5-point underdog.

Heading into Game One of the Eastern Conference Finals there are no key injury concerns for either team.

Rest will be a factor here in Game One as Milwaukee will be playing this game on a week’s rest as opposed to Toronto was last in action on Sunday in a series that went seven games. Despite being the fresher team, the rest could easily work against Milwaukee as they may develop some rust from being off the court for an extended period. All you have to do is look at how teams that won their series in five games or less in the first round fared in their follow-up in the first game of the Conference Semifinals. Teams that fit this metric went 2-4 SU overall.

Can Toronto’s Defense Shut Down The NBA’s Best Offense

The Raptors defense against the Bucks offense may provide some scientific insight into what happens when an unstoppable force meets an immovable object? The Raptors put on a display of defensive supremacy in the Eastern Conference Semifinals against a Philadelphia offense that averaged 115.7 points per game in the regular season (5th in the NBA). Toronto managed to keep the Sixers under the 100-point threshold in five of the seven contests. Anchored by a defensive master in Forward Kawhi Leonard, the Raptors will have the tall order of trying to stop a favorite for MVP in Bucks Forward Giannis Antetokuonmpo who spearheads the top-scoring offense in the NBA which averaged 118.1 points per game. Should Toronto manage to slow down this galloping Bucks offense, they will be in a position to stage an upset.

Can Milwaukee Wear The Raptors Out On The Boards?

In addition to owning the most productive scoring offense in the NBA, the Bucks are also a stalwart on the boards. Milwaukee closed the season out averaging a league-leading 49.7 total rebounds per game. The Bucks draw a favorable match-up here against a Toronto team that finished 17th in total rebounding (45.2 total boards per contest). In all four games that Milwaukee won against Boston in the Eastern Conference Semifinals, they were not beat out on the boards, and they managed to curate over 50 total rebounds in three of those four victories. Contrarily, Toronto lost all three games against the Sixers when they were beat out on the glass and in two of these aforementioned defeats, Philly collected over 50 total rebounds. Undoubtedly, this will be a pivotal battle that will determine the outcome of Game One. Should Milwaukee have its way on the boards, they will be primed to go up 1-0.

The Raptors are 4-1 ATS in its previous five meetings that have taken place in Milwaukee. Mirroring this trend of the Away Team owning an edge in terms of value, the Road Team has won and covered in five of the last six contests between these two sides. For Over/Under players, the Over is 5-2 ATS in the previous seven matches between both teams.

Some other sports books would suggest that the Bucks are laying too many points to the Raptors here and I would conquer with that opinion. The stock is especially high on the Bucks right now after how they dismantled Boston in the Eastern Conference Semifinals. On the flipside, there are some that may call the Raptors benefactors of a literal bounce. Had Game Seven gone to overtime who knows if Toronto even makes it out alive? However, the fact remains that the Bucks are primed to be overvalued here concerning how both teams enter into this series combined with Milwaukee’s present win and cover streak factored into the equation. The Raptors will come out swinging and look to make a statement here. Toronto will make this game of possessions and come in under the number if they don’t stage an upset outright.