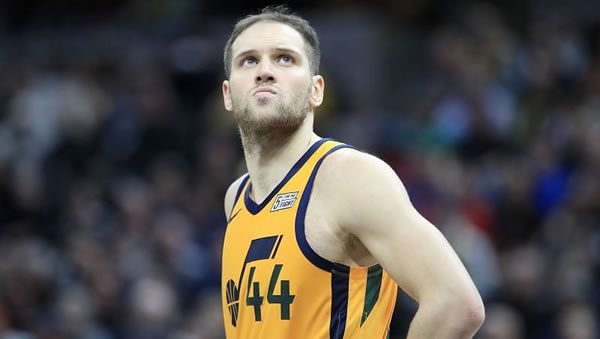 The Utah Jazz enter today’s game, having won four of their past ten games. When playing away from home, the Jazz are an above .500 team, having gone 15-7. As the road team, Utah travels to Golden State with a positive plus-minus rating of 8.0 points. Overall, the Jazz are ranked 3rd among NBA teams in point differential (7.9). Among NBA teams, they have played the 4th toughest schedule.

For bettors, taking the Utah Jazz to cover the spread has been a losing bet as they have covered in 43.50% of their games. Their season-long plus-minus against the spread is -0.8.

On offense, Utah will need to look for additional scoring sources as the team’s leading scorer Donovan Mitchell is out with a concussion. Luckily, the Jazz second-leading scorer, Bojan Bogdanovic, is listed as probable with a finger injury. On the year, Bogdanovic is averaging 18.1 points per contest on 40% shooting from outside.

The Golden State Warriors enter today’s game, winning just four of their past ten games. When playing at Chase Center, the Warriors are an above .500 team, having gone 20-4. As they get set to host the Jazz, Golden State has a positive home plus-minus of 13.0 points. Overall, the Warriors are ranked 2nd among NBA teams in point differential (0.9). This figure has come while playing the 6th most difficult schedule in the NBA.

For bettors, taking the Warriors to cover the spread has been a winning bet as they have covered in 56.80% of their games. Their season-long plus-minus against the spread is 2.4.

On offense, the team’s leading scorer is PG Stephen Curry. So far, Curry is averaging 26.26 points per game while knocking down just under five three-pointers per contest. Kevon Looney has been in charge of cleaning up the glass, hauling in 7.26 boards per game.

In this matchup, look for these two teams to get up their fair share of three-point shots, as Utah ranks second in the NBA, averaging 40.7 three-pointers game. On the other side, the Golden State Warriors get up just under 40 three-s per game (3rd). However, despite their elevated number of shots from downtown, the Warriors rank just 23rd in overall field goal attempts.

With both teams being excellent three-point shooting teams, it will be important to see which unit’s defense will be up to the challenge. On the season, the Warriors are the NBA’s top-rated team in opponent field goal percentage, holding teams just 43% shooting. However, with Golden State going into the game without Andre Iguodala and Draymond Green, look for Utah to take advantage of a depleted lineup.

This matchup will be the second meeting of the season between the Utah Jazz and Golden State Warriors. In the first, game the Warriors picked up a 123-116 win.

How the Public is betting the Utah vs. Golden State

65% are betting the Warriors against the spread.
60% are wagering on the game to go Over the posted total of 220

Coming into this game, the Golden State Warriors are hoping to get back on track after dropping out of the top seed in the Western Conference. On the other side, the Jazz also needs to regain their form as they are currently the 4th seed in the West, sitting 6.5 games behind the Suns. In this matchup, I recommend rolling with Golden State to take care of business at home. Even though both units are dealing with key injuries, the absence of Donavan Mitchell will be too much to overcome for Utah.

Without Donovan Mitchell, I recommend rolling with Jordan Clarkson on his scoring prop. On the season, Clarkson is averaging 15.3 points per game but will be in line for an increased number of shot attempts. So far, Clarkson has struggled with his outside shot but can be one of the more streaky shooters in the league. I expect a big game from the Jazz guard vs. Golden State.