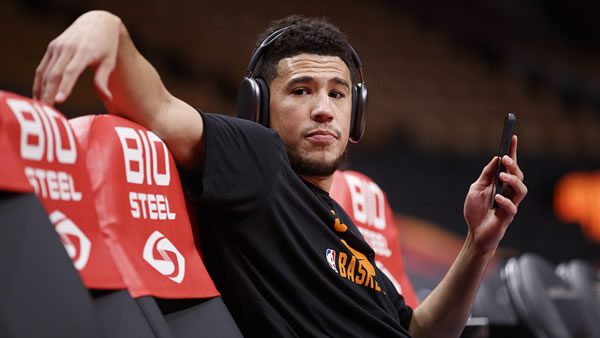 The Utah Jazz enter today’s game, having won 3 of their past ten games. When playing away from home, the Jazz are an above .500 team, having gone 15-8. As the road team, Utah travels to Phoenix with a positive plus-minus rating of 7.5 points. Overall the Jazz is ranked 3rd among NBA teams in point differential (7.9). Among NBA teams, they have played the 7th easiest schedule.

For bettors, taking the Utah Jazz to cover the spread has been a losing bet as they have covered the spread in 43.50% of their games. Their season-long plus-minus against the spread is -0.8.

The Utah Jazz will come into this game again, not having Donovan Mitchell, who is still out with a concussion. In his place, the team will rely on Bojan Bogdanovic at 18.1 points per contest. Center Rudy Gobert is grabbing a team-high 15 rebounds per contest to go along with his 16 points.

The Phoenix Suns enter today’s game, having won 6 straight games.
The Suns have played at an above .500 rate in their past ten contests, going 9-1. As they get set to host the Jazz, Phoenix has a positive home plus-minus of 8.5 points. Overall the Suns are ranked 1st among NBA teams in point differential (5.5). On the season, they have played the 16th most difficult schedule.

For bettors, taking the Utah Jazz to cover the spread has been a winning bet as they have covered the spread in 55.60% of their games. Their season-long plus-minus against the spread is 1.9.

On offense, the team’s leading scorer is SG Devin Booker. So far, Booker is averaging 24.29 points per game while shooting 44% from the field. However, the team will be looking for help on the inside, as center Deandre Ayton is out with an ankle injury. Aside from Ayton, rebounding has been a collective effort between players like Mikal Bridges and Cam Johnson at four boards per contest.

Coming into this game, the Utah Jazz is heavily reliant on the three-point shot, ranking 2nd in the NBA in attempts per game (40.6). On the other side, the Phoenix Suns are more likely to work the ball inside as they are 10th in points in the paint per game. Despite their below-average number of three-point attempts, the Suns still rank 7th in overall field goal attempts.

The key matchup to watch in this game will be how the Utah Jazz handles the pressure of Phoenix’s defense? On the season, the Suns have generated the 7th most turnovers in the NBA. The Jazz has struggled to take care of the ball throughout the season, ranking 26th in assist to turnover ratio. Look for this to be even more of a problem without their main ball handler, Donovan Mitchell.

Tonight’s matchup between the Jazz and Suns will be their first meeting of the season. Last year, Phoenix took all three-contest. This matchup will be the first of back-to-back meetings.

How the Public is betting the Utah vs. Phoenix

The Utah Jazz are coming into this game not only missing their top player but also playing on back-to-back nights on the road. On the other side, Phoenix has been one of the hottest teams in the NBA, playing their way to a three-game lead in the Western Conference. Look for the Suns to take care of business at home and to cover the spread.

My favorite prop bet of the night is to take Devin Booker to go under his player prop total. Even without Mitchell, I expect the Jazz to continue with their strong defensive play. Even though Booker has improved his three-point shot, he is still most comfortable from the mid-range and relies on getting to the line. Throughout the season, Utah has been one of the better defensive teams in terms of free-throw attempts allowed. Question: Where do you bet? So many novice sports bettors are playing at crappy sportsbooks that are going to slow-pay you if you win. We’ve even seen some guys playing with books that are considered stiff outfits! If your bookie is sketchy or you’re looking to add another out, please consider checking out our best sportsbooks page where you can grab a 100% bonus or the ability to bet on games at reduced odds at one of bunch of rock solid online sportsbooks!