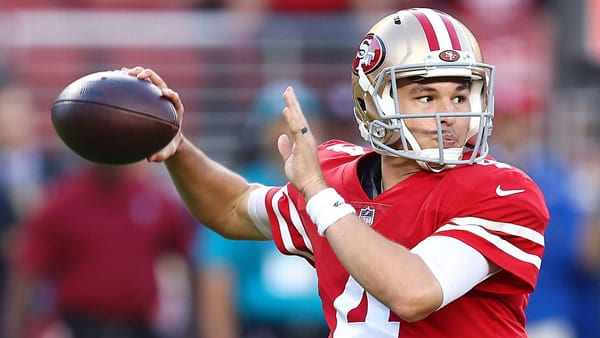 The New Orleans Saints delivered one of the biggest and perhaps slightly surprising wins of the season last week when they obliterated Tom Brady and the Tampa Bay Buccaneers. On the road and everything, the Saints delivered a stunning 38-3 victory in a game where they entered as small underdogs. Instead, the Saints clearly proved they remain the top team in the NFC South and made a claim for the best in the NFC. On Sunday, the Saints return home for a Week 10 showdown with the injury-plagued San Francisco 49ers, who have dropped two straight games and are currently listed as 9.5 point underdogs, which is the largest spread of the 49ers season.

If you have kept up with the 49ers this season, perhaps you already know that the team has been riddled with injuries around their biggest stars. QB Jimmy Garoppolo, TE George Kittle, DE Nick Bosa, RB Jeff Wilson, CB Richard Sherman, and WR Kendrick Bourne are just a few of the popular names that are currently on the Injured Reserve for different reasons. In reality, the 49ers injury report looks like an itemized receipt from the grocery store, which is why the defending NFC Champions are just 4-5 SU and 4-5 ATS this season.

For week 10, the 49ers appear to be in a good position to get back a few players to help their cause. RB Tevin Coleman (knee) and WR Deebo Samuel (hamstring) are listed as questionable but are trending in the right direction. Even outside of the players on the IR, the 49ers were also without Demetrius Flannigan-Fowles and K’Waun Williams on the defensive side of the football. As you can see, it has just been a nightmare for the 49ers this season, which has made the team nearly unrecognizable from a week to week standpoint.

The match-up to watch this Sunday will be the Saints defense against backup quarterback Nick Mullens. The 49ers’ ability to produce scoring opportunities will directly decide their ability to keep this game competitive and within the spread. In 5 games played this season, Mullens is completing 68% passing for 1,143 yards with five touchdowns and four picks. The numbers are not exactly impressive but remember, San Francisco is still a run-first offense. The problem with that narrative is the Saints rank 2nd in the NFL in run defense, allowing just 80 yards per game. Recently, New Orleans’ defense has been playing even better allowing just 47 yards per game over the three last three contests. As a result, this appears to be a perfect match-up for New Orleans because if they can shut down the run, they could put turnover-prone Mullens into difficult passing situations. In that scenario, you have to like New Orleans’ chances to run away with this game, especially if they can force a few turnovers.

Bet on the Saints offense in week 10

While the match-ups indicate upside for the Saints defense, we still must consider the alternatives and probability of different outcomes from a handicapping perspective. If the 49ers are able to run the ball effectively, what is the likelihood the Saints still pull out the cover? In my opinion, I believe there is still a high probability of the Saints pulling out the cover even if we don’t get the significant defensive effort that I expect, and that reason revolves around the Saints offense. Coach Sean Payton continues to prove why he is the best play-caller in the business. Last week, we witnessed Taysom Hill get mixed into the quarterback position in situations and thrived with each snap. The Saints are fully healthy for the first time in several weeks, and we witnessed a glimpse of their potential last week against the Buccaneers. New Orleans has weapons all over the field and has averaged an NFL 4th best 30.5 points per game this season. Therefore, rest assured that the Saints offense will put bettors in an advantageous situation on Sunday!

Jay’s Pick to Cover the Point Spread: New Orleans -9.5. What is your bookie socking you for odds/vig? Are you laying -110? If so, you should sit down and pencil out how much you’d save if you made the switch to -105 odds? Better yet, we’ll tell you! THOUSANDS of dollars over the years! Start betting smarter TODAY at BetAnySports! Home of -105 odds sides and totals!