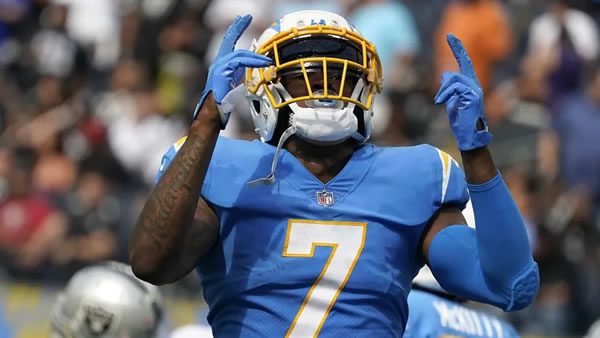 The Los Angeles Chargers take on the Jacksonville Jaguars in the Wild Card round of the AFC Playoffs on Saturday. The Jaguars had to dig deep on Sunday to nip the Titans in a game that decided the AFC South and after a topsy-turvy season, they find themselves hosting a playoff game at 9-8. The Chargers fell to the Broncos, 31-28, but had already locked up this seed. At 10-7, they would have to rate as a potential tough out for anyone in this postseason. Who can get us the cover at TIAA Bank Field on Saturday?

Unless I’m missing something, I’m not sure what Brandon Staley had in mind last week in a game where there was nothing to gain, playing almost a full game with an injury-prone cast. And as could have been predicted, WR Mike Williams went down with an injury where a return this week would seem unlikely just based on how it looked. X-Rays were negative so we’ll see. What was it all for when they couldn’t even beat the Broncos anyway? It’s just a lousy way to finish the season, with the urge to keep guys from being rusty costing the Bolts as they head into the playoffs for the first time with Justin Herbert and Staley at the helm. But still, they’re dangerous. And with all the different manifestations of each team this season, one is almost inclined to not place too much stock in an eye-popping 38-10 win over the Chargers at SoFi Stadium in week 3. Both teams have been up and down all season.

Last week notwithstanding, the Chargers came into that with a 4-game win streak that allowed them to lock up a playoff slot before week 18. The Jags, meanwhile, have five straight wins, allowing them to overtake the Titans when at one point, it seemed like a pipe-dream. The last impressions might not be that great, with the Chargers possibly costing themselves a key piece in losing what should have been a throwaway game and Jacksonville laboring with a sideways Titans team, only corralling victory at the last moment. But still, both teams enter this postseason with some steam.

Which Offense Can Thrive on Saturday?

Both teams have vulnerable defenses that can be exploited by talented offenses. There is a lot in common on both sides, perhaps less so if Williams is out. But both offenses are led by talented young quarterbacks of similar stature, both supported by good running backs, along with solid receiver and tight end play. Different guys on both offenses are capable of putting forth huge games, as we’ve seen. But alas, there are weaknesses and reasons why you don’t know what you’re getting from week to week. Both teams have great young QBs working behind subpar offensive lines, along with other unflattering team details that make it a crapshoot from week to week.

While it certainly didn’t work in their first game, the Chargers look to unleash their aerial firepower against the Jags this week. It’s not a pass-defense that is very good and while their overall defensive performances haven’t been terrible the last few months, the more-vital aerial offenses they’ve faced have preyed on this secondary to quite a degree. While the Chargers’ secondary is better, with more talent and playmaking, they aren’t invulnerable from a stoutness perspective. And with Travis Etienne coming out of the backfield, they should be able to open things up a little against a Chargers’ run-defense that might be the worst run-“D” in the whole postseason.

As we saw on Sunday, the Jaguars can depend on defensive playmaking from time to time, getting a recovered fumble for a TD late against the Titans to save the season. Josh Allen and others can help get the Jags over the hump when the offense isn’t quite carrying its weight. But the opposite might be true to an even greater extent. With Joey Bosa and Khalil Mack bringing the pass-rush, along with a playmaking middle and secondary with difference-makers like Derwin James, the Chargers might have the more-impactful defense in terms of big plays.

While the Chargers have an excellent pass-catching back in Ekeler and that should bolster their aerial angle against a suffering Jacksonville pass-defense, they don’t have much of an overall run-game. Whereas one can imagine the Jags running the ball on the Chargers and even doing good work with Christian Kirk, Zay Jones, and Evan Engram, the Chargers’ route might be narrower. The cast has filled out well for the Jaguars over the last half of the season and they’re the more balanced and potentially-intact offense of the two. Still, with Herbert at the helm and slinging it to Ekeler and Keenan Allen, with the rest of a deep aerial cast against this defense, the prospects are there for a big showing.

Despite both teams coming in with a head of steam, with nine collective wins in their last ten games, both have an air of vulnerability that makes a stance on either provide a less-than-secure feeling. It might even be harder for Chargers’ backers, especially those who recall the 28-point loss at home to this very team where nothing went right. I just can’t help but think that the Jags have been made to look a little better than they really are with a lot of backloaded games in what was a bad AFC South division and that their shortcomings could manifest against a more-vital Chargers offense that is admittedly a crapshoot endeavor. Still, I’m going to take a whirl on the Bolts this Saturday.

Loot’s Prediction to Cover the Point Spread: I’m betting on the Los Angeles Chargers minus one point.

Bet your NFL playoffs predictions for FREE by scoring a 100% REAL CASH bonus up to $500 when you use bonus promo code PREDICTEM at Betnow Sportsbook!