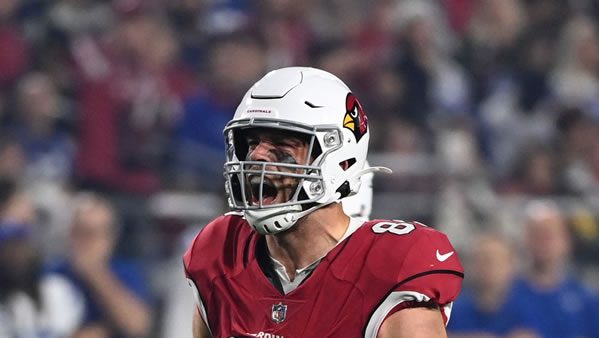 The Arizona Cardinals battle the Los Angeles Rams at SoFi Stadium on Sunday in an NFC West battle. Neither team is having a good time of it, each underperforming drastically up to this point. It was more of the same last week with the Cardinals dumping a 31-21 game to the Seahawks at home. The Rams didn’t see things go any better after losing the lead late in an unsightly game with the Bucs on Sunday, losing for the fourth time in five games, 16-13. Needless to say, both teams are at a major crisis point. Who can at least temporarily stave off the complete destruction of their season this week in Inglewood?

Even in week ten where these two squads have managed a measly 3 wins apiece, people are still holding out some kind of weird hope that things can suddenly snap back into form. It might be time to just wrap our heads around a massive Super Bowl hangover for the Rams and a Cardinals team that has seen their formula fall completely flat. Whatever magic the Rams had last season is truly gone. And for the Cardinals, not all teams that see improvement at the beginning of new regimes are able to see it through all the way to the end. Whatever they had cooking has just hit a wall.

We saw some early signs of this in these teams’ first divisional matchup in week three. We’ve seen a lot happen since then, including some personnel shifts on both teams, so we don’t want to get too hung up on the Rams’ 20-12 win. The Cardinals still had zero touchdowns on the day. The Rams pecked and poked their way to a couple rushing TDs. Cooper Kupp caught only 4 balls for 44 yards. Kyler Murray completed 37 passes but had no touchdowns. And for the most part this season, this is what we’re seeing this season from both offenses. They have pieces that suggest the ability to make it work, but for the most part, it just doesn’t.

Will the Rams Defense Control This?

The LA defense pretty much dominated this in their first go-around in Arizona a month and a half ago. Out of the two teams and what they’re doing in different facets of the game, the Rams’ defense might be the most unaffected unit. While we’ve seen the Cardinals offense become a touch below average with their “D” taking a clear step backwards, along with a Rams’ offense that has really fallen off a cliff, the Rams defense is holding firm. Despite being hung out to dry by a suffering offense that can’t run the ball, they’ve been respectable on all but a few occasions this season. Against a sputtering Cardinals’ bunch, we could see them taking this game over once again. In a game where there are so many parts of both teams suffering, maybe that’s enough.

Still, a team needs offense. Since getting DeAndre Hopkins back, we’ve at least seen signs of moderate life from a Cardinals’ offense that has mostly been a major disappointment. They can at least run the ball from time to time and getting James Conner back gives them possibilities looking ahead, along with the development of rookie back Eno Benjamin. We’ve also seen Murray flash some more of a running flair in some recent games. It feels strange to laud this offense after how they flopped in the second half last week at home against Seattle, but again, it’s slim pickings when searching for optimism with these teams on either side of the ball.

How Big a Liability is Arizona’s Defense this Week?

Whereas Arizona has at least theoretically multiple routes to offensive success, the Rams have been more or less reduced to the Matthew Stafford to Cooper Kupp connection. The Cardinals did a nice job with that the first time around, so maybe they match up better in this spot than what would otherwise seem the case. After all, only one other team in the NFL has allowed more points per game than Arizona and in the last three weeks, they have at least been consistent in allowing 31, 34, and 31 points in consecutive games. Whereas we saw them showing some resistance here and there in the opening month of the season, poor play has become more the norm in subsequent weeks.

But attempting to time a Rams’ offensive surge has been costly for those attempting to play that game. Stafford is suffering and that line has really taken a step backwards. Again, the run game can dissipate into nothingness. The supporting receiver crew that was so critical to their success has disappeared and even quality pieces like TE Tyler Higbee vanish some weeks. Other than a 24-point showing against Carolina a few weeks ago, we’re seeing point totals ranging from 9 to 14 in four of their last five games. After already not succeeding much against this Cardinals defense, might we see more of that with the Rams even more in a funk now?

It can be a tricky game to play “Which team is more broken?” At home and with desperation setting in, this could easily be a spot for the Rams to beat a team they already beat and just move on with their season. And not to say the Cardinals are appreciably better than they were when these teams first met, but the Rams might actually be worse. They’re at least further away from what they’re trying to be and the reality of their situation seems to be setting in now. With the Cardinals simply showing more life overall on offense, I sense it will be enough to get them over the hump for the cover on Sunday. I’ll take the Cardinals.

Loot’s Prediction to Cover the Point Spread: I’m betting on the Arizona Cardinals plus 3 points. Bet your Week 10 NFL picks for FREE by taking advantage of a 100% REAL CASH bonus up to $500 at one of the oldest and best bookies on the web —> Betnow Sportsbook!