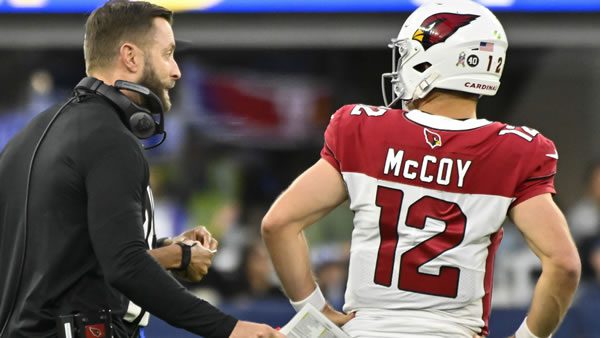 The Arizona Cardinals battle the Denver Broncos at Mile High on Sunday. One likely could have received good odds that these teams would be entering this week 15 battle with a combined seven wins, but such is the case with these two disappointments. Now both squads are dealing with even more injury concerns. Last week was a bad week for both teams. The Cardinals lost to the Patriots, 27-12, on MNF, losing Kyler Murray for the season with an ACL tear. Denver, meanwhile, saw Russell Wilson go down with a concussion in a 34-28 loss to the Chiefs on Sunday. Who can come up with something this week at Mile High?

With Murray out of action, it will again be Colt McCoy behind center, no stranger to leading this team this season. It’s just that the injuries this season are adding up on both sides of the ball for the Cardinals, and having to make a go of it without Murray isn’t going to help. But the Broncos might be without Wilson, who looked bad after taking a hit late against the Chiefs. With Wilson having played some of his best ball of the season, it was also untimely, with Brett Rypien looking to maybe get his second start of the season after not looking so good in his first.

On one hand, neither starting QB has been good this season, so it’s not like either team needs to replace superstar play. But there is still some drop-off when they go to the backup. For the Cardinals, things might not get so sideways with McCoy in there. A veteran who has been able to keep a gig for 13 seasons, starting five games with the Cardinals over the past two seasons, McCoy is a 36-year-old veteran who knows what he’s doing. Where Rypien’s career ends up going is anyone’s guess, but he likely won’t make it to 36 and did nothing in his first start to suggest much promise for the Denver offense this week. Whereas Murray and Wilson were more or less in the same league, there might be a bigger disparity here between a product in McCoy, who has at least proven his worth to some extent, versus a guy in Rypien, who might not be long for this league.

Optimism for the Broncos

I wouldn’t expect the Denver defense’s performance on Sunday to signal a turn of fortune. A lot of good defenses hit a wall when playing the Chiefs, and maybe what led up to that should garner more attention as they get ready to play an offense that offers a lot less venom in the Cardinals. We’re in week 15, and despite three wins on the season, it has only been the Chiefs and the Raiders who managed to exact any real damage on this Broncos’ defense. Facing offenses like what the Cardinals can be expected to bring to the table this week, they’ve more than held their own. Again, McCoy is far from automatic, and the Denver secondary can make some plays that could throw a different spin on this game.

For all the issues the Cardinals face, they still have a lot of juice on offense, with a player at QB more likely to bring it about. With RB James Conner and receivers DeAndre Hopkins, Marquise Brown, and a lot of talented secondary cast members, there is still talent on offense to get the job done. At the very least, there is a realistic path to some points. With the Broncos down to Latavius Murray at running back and their offense now resembling nothing they had in mind in the preseason, it’s just hard to imagine a lot of points coming from this group this week, even against a dicey Arizona defense. And you can’t help but start wondering when this Denver defense stops finding reasons to give so much of themselves when the offense is really making it a hopeless situation.

Still, one bad game does not mean they won’t perform closer to their normal form against an Arizona team that seldom makes its way up to Mile High. With the trajectory of the Cardinals leading into this spot, a matchup with a good defense in an out-of-context setting wouldn’t seem to be up their alley. When you’re looking at two teams where the argument presents a lot of give-and-take, these conditions might not serve Arizona well this week. They’ve had it pretty easy on the weather front, and while it’s not supposed to be a snowy day in Denver, it will indeed be cold. Maybe this is a spot where the Broncos can benefit from their geography a little bit against a Cardinals team that comes limping into town, probably a bit deflated.

While what really stands out for some will be the Denver defense and the idea that they can come out on the sunny side of a grind on Sunday, I tend to think a struggling Denver offense is in no position to absorb more losses. And while Wilson has spent most of the season stinking it up, it’s not like they have an appetizing second option waiting in the wings. Again, this is assuming Wilson is out, but it seems odd to rush him back when this season is going nowhere. In addition, I could be off on this, but is it crazy to think the Denver defense starts to wane a little bit? At any rate, points should be precious this week, and having three points might feel pretty good come the game’s end. I’ll take the Cardinals and the points on Sunday.

Loot’s Prediction to Cover the Point Spread: I’m betting on the Arizona Cardinals plus 3 points. Bet your Week 15 NFL picks for FREE by scoring a 100% real cash bonus up to $300 when using bonus promo code PREDICT100 at MyBookie Sportsbook!