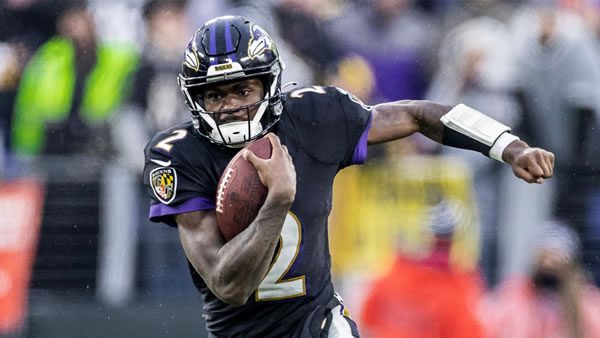 The Baltimore Ravens travel to Cleveland to take on the Browns for a mid-December Saturday afternoon AFC North battle. With Raven QB Lamar Jackson sidelined, BOVADA.LV has made the Browns 2½ point favorites and set the Over/Under at 38½. Every remaining game is a playoff game for the Ravens, so let’s take the points and back John Harbaugh’s squad. Here are three reasons.

Tyler Huntley Can Fill The Gap

This game will be the second consecutive that Jackson misses, thrusting Huntley into the starting role again. Huntley suffered a concussion last week while leading the Ravens to a win in Pittsburgh, so there is a chance he doesn’t play – but all signs point to him being behind center on Saturday. He started four games last year in Jackson’s absence. Though Baltimore only won 1 of those games, Huntley was very efficient. He completed 65% of his passes with three touchdowns and also contributed in the running game – averaging over 6 yards per carry. The Raven gameplan will not change – keep the chains moving by running the ball and occasionally try to hit Mark Andrews over the middle. J.K. Dobbins returned last week to lead the Raven rushing attack with 120 yards on 15 carries and a touchdown. Dobbins still hasn’t fully recovered from last year’s ACL tear, but last week was the best Baltimore’s running back crew has looked in 2022. Gus Edwards is also getting closer to 100% from his ACL tear, and he averaged 5 yards per carry on 13 tries last week against the Steelers. Huntley should be able to have enough success orchestrating the running and short passing game to put points on the board. Playing against Cleveland’s defense will make it easier.

The Brown defense has struggled all year. They have allowed the 27th most points in the league and also allow the 27th yards per carry at 4.8 yards per carry. In the five games since their bye, Cleveland’s opponents have averaged over 130 rushing yards per game. There is nothing that this defense does exceptionally well. Despite having Myles Garrett coming off the edge, they only have 27 sacks on the year and have only created 13 takeaways. Baltimore will definitely miss Jackson in this game, but Huntley (or even Anthony Brown if Huntley is ruled out) will be able to move the ball and put the ball in the endzone or give Justin Tucker opportunities to kick field goals.

Deshaun Watson Is Still Working Off The Rust

Watson signed the big contract during the off-season, and we are finally getting to see him in a Brown uniform. He looked better last week against the Bengals than he did against the Texans, but he’s still not the elite quarterback he was when we last saw him in 2020. He has only one touchdown thrown against two interceptions and is only averaging 6.4 yards per attempt. He should continue to improve this week, but he won’t be able to carry Cleveland to a win. Coach Kevin Stefanski will rely on Nick Chubb to shoulder the load this week, but Chubb has worn down as the season has progressed. He managed just 34 yards last week in Cincy and has failed to eclipse 65 yards in three of their last five games.
The Ravens’ defense will be ready for Chubb. He ran for 91 yards in their week seven-game, but their rush difference is better at this point of the season. Since that week seven match-up, four of their six opponents have rushed for less than 50 yards. The addition of Roquan Smith has made a huge improvement in the Run D, and the Ravens now yield the 3rd lowest opponent rushing yards per attempt. The game will come down to Raven’s ability to shut down Watson and the Brown passing attack. They had good success shutting down Jacoby Brissett in week 7, including sacking him five times. I think the Ravens’ defense will know this game is on their shoulders and will show up and control the game.

The last four games these teams have played have been decided by one score. Six of Baltimore’s 13 games this year have been decided by a field goal or less, and their last three games have been decided by a total of 4 points. With the total being set below 40, getting 2.5 points is like a pot of gold. Baltimore is the better-coached team, has the more reliable kicker, and we’re getting points with them. This is a must-win for Baltimore, so they will be ultra-motivated while Cleveland is only playing for stats.

Take The Points With Baltimore

We should expect this game to be an old-fashioned slugfest and be decided by a field goal or less. Let’s grab the 2.5 points, or make this part of a 6-point teaser and get 8.5 points and roll with the Ravens. Bet your Week 15 NFL predictions for FREE by scoring a 100% real cash bonus up to $500 when you use bonus code PREDICTEM on the Special Offers page at Everygame Sportsbook!