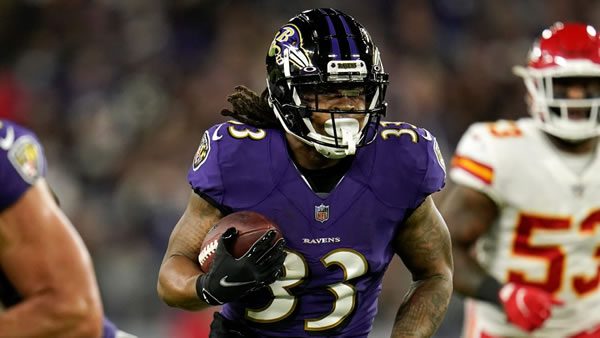 The Baltimore Ravens enter Week 11 with a 6-3 record and are among the top teams in the AFC, and currently sit 1st in the AFC North. Baltimore took an upset loss last week against the Miami Dolphins, leaving the door open in the AFC North. Despite an injury-ridden season, the Ravens have found a way to win games. Baltimore’s most notable win so far on the year came over the Chargers in a 34-6 outing. Lamar Jackson has led the offense in another MVP-like season, averaging 342.9 YPG combined on the ground and through the air. The Ravens have the second-best offense in the NFL, averaging 414.1 YPG, but find themselves in the bottom third of the league defensively, giving up 371.6 YPG.

The Chicago Bears sit among the league’s bottom teams with a 3-6 record and sit 3rd in the NFC North. Despite a losing record, the Bears built some momentum in their last game two Mondays ago against the Steelers in their 29-27 loss. Rookie QB Justin Fields had a slow start to the season but is starting to show improvement, scoring a touchdown in both of his last two starts. The Bears offensively come in 31st only ahead of the Texans with 280.7 YPG. On defense, they give up 348.9 YPG.

It’s no secret that the Baltimore Ravens are a run-heavy team with Lamar Jackson under center. The Ravens run the ball more than 44% of the time, which in turn leads to long, clock bleeding drives. In fact, they lead the NFL averaging 154.1 yards a game rushing. This directly impacts the team’s ability to control the ball, as they enter week 11 with the longest average time of possession in the league at just shy of 33 minutes. Anytime you can keep the ball away from the opposing team’s playmakers, you set yourself up for success. The Bears come up short on the side of successfully running the ball but know a thing or two about running the ball. Chicago currently leads the NFL by running the ball 49.6% of the time. With a rookie QB under center, Chicago is still easing their way into letting Fields sling the rock. The Baltimore offense is going to have yet another Sunday of keeping the clock running, as the Bears defense has been uncharacteristically allowing 122.8 YPG on the ground.

The Baltimore defense has been one of the NFL’s prolific defenses for the past few decades. This year has been no different as the team allows just 88.2 YPG rushing, which is the 4th best mark in the league. This will prove to be an issue for the Bears’ offense, who, as mentioned above, run the ball over 49% of the time. If the Bears are unable to find success running the ball, it will force them to put the ball in Fields’ hands to throw it. If Chicago decides to go with a pass-first mentality Sunday, they may see better results as the Ravens defense is the worst passing defense in the league, allowing 283.3 yards through the air. I don’t see that happening as they are still building the confidence of their young QB.

No down is more crucial in the game of football than third down. Going into this matchup on Sunday, we see the Ravens defense regularly getting off the field on third down, allowing just 3.8 conversions on third down a game. Again, with the trend of the Chicago run game, if the Ravens can force third downs from medium and long distances, I can see this trend continuing of getting third-down stops. It is also worth mentioning that the Bears only convert on 4.1 third downs a game, which is 3rd worst in the league. If the Bears can’t find a way to keep drives going, turning the ball over to the Ravens is going to make a long game for them.

Sunday will be just the seventh time these teams have met and the first time since 2017. The last two matchups saw overtime, which ended in a Chicago win. The fact that Chicago won the last two matchups should carry little to no weight in Sunday’s game, as both rosters look very different since then.

How the Public is Betting the Ravens vs. Bears

63% are betting the Ravens to cover the spread.

58% are wagering on the game to go under the posted total of 45.

The Ravens enter this week following a devastating loss to Miami and the Bears a loss to the Steelers. As both teams look to bounce back, one team has more to play for, and that is the Ravens. Recent trends show both teams have struggled ATS, but the Bears are a team the Ravens match up well with to break that trend. The line opened at 6 points but has since moved to 4.5, giving the Ravens a better margin to cover. Take the Baltimore Ravens to cover this week’s 4.5-point spread. Bet your Ravens vs. Bears pick and ALL your Week 11 NFL picks for FREE by taking advantage of a 100% REAL CASH bonus on your first deposit of $100 to $500 at GTBets Sportsbook!