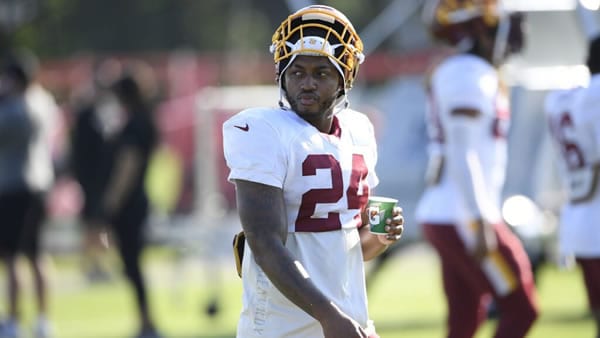 It’s the Battle of the Beltways, but it doesn’t look like it’s going to be much of a battle, as the Ravens come in giving nearly two touchdowns to the Football Team. Clearly, both Vegas and the public expect Baltimore to take out its frustrations on Washington after the Ravens got ripped by Kansas City on Monday night, showing that there’s still a bit of a way to go for Baltimore to catch up to the defending Super Bowl champions.

On the other hand, Washington appears to be a potential playoff team because of how awful the NFC East is turning out to be. Despite two straight losses to Cleveland and Arizona, the Football Team sits in a first-place tie in the division in part because they’re usually playing well enough to stay in the game and give themselves a chance in the fourth quarter. That strategy nearly worked against the Browns, but Cleveland turned the tables on Washington, scoring 17 fourth-quarter points against the Football Team to earn a victory. With Baltimore coming in on a short week, does the Football Team have enough to put some pressure on the Ravens and pull off a surprise, or will this be nothing more than a chance for the Ravens to show that Kansas City was just a speed bump?

How the Public is Betting the Baltimore/Washington Game

The total has dropped a fair amount, falling from 51 at the opener to 47 now. Even with the total dropping, the line has barely moved, going from -12.5 to -13 for the Ravens.

The Ravens don’t really surprise anyone when they’ve got the ball: it’s going to be in Lamar Jackson’s hands for most of the game. Jackson isn’t just the leading passer for the Ravens; he’s also their leading ball carrier in terms of both rushing yards and attempts. That’s both good and bad for opposing defenses, as opponents know that the Ravens are going to try to keep the ball in Jackson’s hands for as much as possible, but they still have yet to stop it.

Part of that is because Jackson has proven himself to be more than just a running quarterback, as he’s emerged as an accurate passer who can also make plays with his legs. He’s also got some solid options at receiver, as Marquise Brown has already caught 12 passes this season, and Mark Andrews has been a reliable option in times of trouble.

The other part is more on the Ravens than on their opponents: Baltimore really hasn’t found a permanent solution on the ground, letting Jackson make the best decision based on what he sees. J.K. Dobbins looks like he might become the long-term answer at running back, but he’s only been used for 10 carries so far this year, so either John Harbaugh isn’t sold on Dobbins yet or wants to go with an attack that allows multiple weapons to thrive. In either case, Baltimore will be in no hurry to try to go with one bell-cow back, as the Ravens average 5.7 yards a carry as it is.

What the Ravens do well, Washington doesn’t. The Football Team doesn’t really have much of a ground game to speak of, as they average a full two yards per carry less than the Ravens do. That’s put a lot of extra pressure on Dwayne Haskins at a time when he really doesn’t need to be carrying the entire load.

The extra pressure caught up to Haskins a bit in Week 3, as he tossed three interceptions against Cleveland and helped the Browns fuel their comeback. Over the past two weeks, Washington has lost the turnover battle by a 7-1 margin, which is a big reason why the Football Team has lost the past two games. In order to have any chance at all against the Ravens, Washington not only has to take care of the football, but it’s also got to establish more of a weapon than just wide receiver Terry McLaurin and tight end Logan Thomas.

Over the first three games, Haskins has thrown 101 passes, and 49 of them have gone to either McLaurin or Thomas. Obviously, on a team that doesn’t have many weapons such as Washington, it’s understandable that Haskins would keep going to a reliable weapon, but against a quality defense such as Baltimore’s, his tendency to fall in love with a couple of targets can be a major liability. With no real running game to fall back on, that could really get exposed, especially if Baltimore gets off to a big start.

Quoth the Ravens, “Never score.” OK, it’s not quite that bad, but Baltimore has consistently found a way to hit the under when it’s been favored. Over the past five games where the Ravens have been favored, all five of them have gone to the under. In fact, seven of the past nine games involving the Ravens have hit the under, and one of the two exceptions was a pillow fight with the Steelers where the total was set so low that the teams couldn’t help but top the 35-point number.

For Washington, October has been the month where the defense comes to play. The Football Team has gone under in seven consecutive games in October, dating back over the past two seasons. However, that’d be a significant change from their previous three games, as the Football Team has gone over twice and just missed going over in Week 2 by 1.5 points. Washington is not the kind of team that plays defense well outside of the third quarter, where it hasn’t given up a point all season. Instead, the Football Team is the kind of team that spends the second half battling back after creating an early deficit. In all three games, it’s played, Washington has both trailed at halftime and given up at least 17 points to its opponent.

The trends also lend themselves well to the type of teams these are. The under has hit in four of the past five meetings, and the favorite has covered in four of five as well.

With temperatures as high as 67 degrees and ample cloud cover, it should be ideal weather for football.

I can’t see Washington’s mess of an offense trying to keep up with an elite squad in Baltimore unless the Ravens are just so distracted by the loss at Kansas City that they fail to take Washington seriously and play one of their worst games of 2020. I don’t think that’s going to happen, and I think there’s plenty of opportunities to make money here.

First, I’d jump on Baltimore to go over 16.5 in the first half. The Ravens have a better offense than either Philadelphia, Arizona or Cleveland, all of whom had no trouble getting to 17 in one half on Washington. Right now, you’d get this for -110, and this is a perfect early play. Second, I look to live bet the third quarter. Washington hasn’t given up a point in the third quarter, so you might be able to bet on a low-scoring frame there.

Finally, I’d take the Ravens. I think Baltimore simply overwhelms Washington and puts this game to bed relatively early. I cannot see the Football Team putting up serious opposition in this one, especially without a home crown to fall back on. Give me the Ravens to win big here.