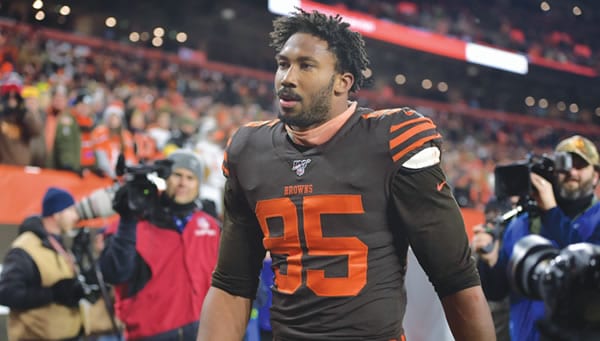 Washington and the Browns play their third games under their new coaching regimes when they meet in Cleveland for an NFL inter-conference bout Sunday afternoon. Each team comes in at 1-1 on the season, but the Browns are lined as touchdown favorites on the NFL betting odds. How are we playing this game with our free NFL pick?

Week 3’s NFL betting odds opened Cleveland at -6 over Washington, with an over/under of right around 44.5. Early betting action then bumped the Browns to -7 and dipped that total to 44.

In its first season under new head coach Ron Rivera, the Washington football team is 1-1 after losing at Arizona Sunday 30-15. Washington got called for a penalty on the opening kickoff, which put them in a hole right away, punted on the game’s opening possession, and then allowed the Cardinals to drive 48 yards to a touchdown. Washington then caught a break with a takeaway inside the Arizona red zone but fumbled the ball away three plays later. Washington trailed 14-0 after one quarter, 20-0 at the half and 27-3 in the fourth, pulled to within 27-15 with six minutes left but could get no closer and came up short ATS as seven-point underdogs.

On the day Washington got out-gained by the Cardinals 438-316, and most of the offensive yardage it came up with came in garbage time, after falling behind by 24 points. Washington also lost the turnover battle 2-1, creating at least a -10 points differential, and lost time of possession by a 34:26 split.

That game stayed under its total of 46 thanks to Washington’s offensive ineptness and its two failed 2-point conversion attempts in the fourth quarter.

Washington opened its season two weeks ago with that 27-17 come-from-behind victory over Philadelphia. Washington spotted the Eagles the first 17 points of that game, then rallied from there. But that win doesn’t look as good now as it did then, after Philadelphia’s poor showing Sunday against the Rams.

Cleveland, meanwhile, in its first season under new head coach Kevin Stefanski, is also 1-1 after outlasting Cincinnati last Thursday night 35-30. The Browns spotted the Bengals the first three points of the game, then drove 75 yards to a touchdown and a lead they’d never relinquish. Cleveland drove 57 yards to another TD on its second possession, led 21-13 at the half, then scored the first seven points of the second half and hung on from there for the victory.

Unfortunately for Browns’ financial backers, Cleveland gave up an “oh, by the way,” Cincinnati touchdown with 43 seconds left to piss away the cover as six-point favorites.

On the night, the Browns out-gained the Bengals 434-353, even though they ran 30 fewer offensive plays than Cincinnati. Cleveland also out-rushed the Bengals 215-68.

The Browns opened their season two weeks ago with that disappointing 38-6 loss at Baltimore.

These teams last met back in 2016, a 31-20 Washington home win. Kirk Cousins quarterbacked Washington that day against Cody Kessler for Cleveland.

Cleveland owns the better running game, the better defense, and the more experienced quarterback. The Browns don’t exactly own a great recent track record at winning games they should win, and covering those spreads, but perhaps it’s time they start working on one. We’ll take Cleveland, minus the points. Bet your Week Three NFL picks for FREE by scoring a fat 100% bonus on your first deposit of $100 to $300 at MyBookie Sportsbook!