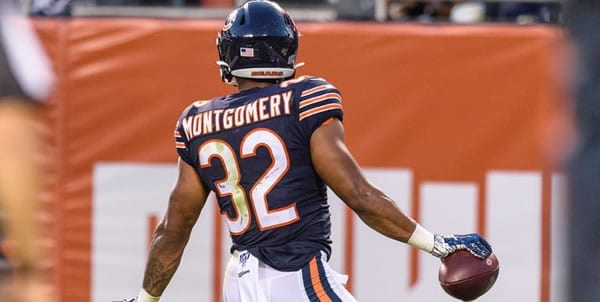 After a devastating loss to Dallas two weeks ago in a battle for supremacy in the NFC East, the Philadelphia Eagles had an impressive bounce-back performance in a 31-13 road victory over Buffalo last week. The Eagles were able to get their ground game going as both Jordan Howard and Miles Sanders combined for more than 170 yards with two touchdowns against a rather tough Bills defense. This week Philadelphia will look to build on that success in another important home game against the visiting Chicago Bears at Lincoln Financial Field.

The Chicago Bears’ troubles continued last week with a 17-16 loss to the Los Angeles Chargers. Despite Matt Nagy’s blatant attempts to abandon the run and continue to put the game into the hands of errant Mitchel Trubisky, the Bears actually stuck with the running game last Sunday, placing heavy emphasis on rookie running back David Montgomery. Perhaps to the delight of fantasy owners, Montgomery converted 27 touches into 135 yards with one touchdown and also hauled in 4 passes for an additional 12 yards. Unfortunately, Montgomery’s breakout performance did not reveal any different results for the offense which failed to score more than 21 points for the 5th time through the first seven games.

For this Sunday’s match-up against Philadelphia, it will be interesting to see if Nagy continues the same type of focus against the Eagles. Philadelphia has one of the top run defenses in the league yielding just 90 yards per game on the ground. From a defensive standpoint, Philadelphia has been more susceptible to opposing pass attacks. The Eagles rank 20th in pass defense, allowing 256 yards per game. Therefore it will be interesting to see how the Bears attack this week. I think the entire NFL has expected Tribusky to break out of his slump by now, but it continues each week. With a match-up that would typically favor a passing attack, perhaps Trubisky will get another opportunity to improve on his dreaded 2019 numbers.

The battle to watch in this game will be the Eagles offense against one of the top-rated defenses in the league. Philadelphia has had its share of floundering performances on offense this year. The Eagles were recently held to 30 points combined against the Vikings and Cowboys pressuring defenses. This week Chicago provides another difficult challenge for the Eagles offense. I personally thought the offense was more controlling with the ground attack last week. If Jordan Howard and Miles Sanders continue to move the ball on the ground, it is going to make things easier for QB Carson Wentz. Wentz has been producing all season with 14 touchdowns and just four picks. However, he needs some help to make this offense more efficient all-around. I expect the Eagles run game will continue to get more focus to counter set that balance. The Bears have been really good against the run this year and will have favorable match-ups in this game to keep Philadelphia’s offense at bay. I don’t expect a lot of scoring opportunities and this game could easily be decided by 1-2 big plays.

If you like performance trends, the “under” should be a hot take this weekend. The Bears have hit the “under” mark in 9 of their last 12 games, which includes 7 of their last nine games against NFC opponents. Meanwhile, Philadelphia has reached the under in 4 of their last five games in November despite a more recent trend of hitting the ‘over’ in four of their previous six games. From the betting side, the Eagles are just 1-5 ATS in their last six games against NFC opponents, and the Bears are only 2-5 ATS this season. The Bears are also just 1-4 ATS in the previous five meetings against the Eagles.

Jay’s Pick to Cover the Point Spread: Under 44