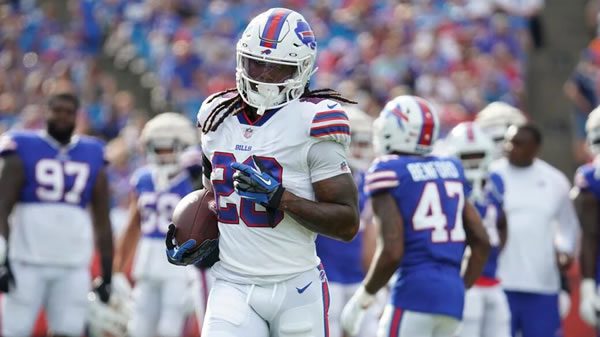 Point Spread: BUF -2.5/LAR +2.5 (Bovada - One of the best football sportsbooks on the web! They’re live betting platform is incredible!)

The 2022 NFL regular season kicks off with a Thursday Night Football matchup between the Buffalo Bills and the Los Angeles Rams. Among the more-premier teams from their respective conferences, it’s a marquee matchup with which to start the season—two teams with high hopes and good reasons for having them. The Rams are the defending Super Bowl Champions, while the Bills have undergone a dramatic about-face in recent years to become a compelling contender entering 2022. Can the Rams hold down the fort, or will the Bills serve early notice that they’re not messing around this season? Let’s break it down!

On the one hand, the Rams lost some people on defense, including Von Miller and some DBs. If the reshuffled pieces suffice, the addition of Bobby Wagner in the middle could add some juice, particularly in the run-stop area. That might not matter as much in this specific matchup against the pass-happy Bills, but a bolstered “D” from a Super Bowl winning team isn’t such a bad deal. The Bills addressed some things that kept them from getting through 13 seconds to keep the Chiefs out of the end zone. That included addressing the secondary, in addition to signing the aforementioned Miller. They also added some juice to the other side of the ball and are relatively intact all-around.

With the Rams, there are a few potential issues. The elbow issues of Matthew Stafford loom. Van Jefferson has a knee injury, and Odell Beckham, Jr. is still on the mend from ACL surgery. Jalen Ramsey is coming off a shoulder injury, and in total, that’s a big chunk of their core, and if they start facing health concerns among their best guys, this could go sideways. We’ll also see how Stafford does with an offensive line that isn’t quite as fierce as last year, with the retirement of Andrew Whitworth and the departure of Austin Corbett.

Do Conditions Favor the Rams?

First off, it’s going to take more than some sunny weather and a road trip, in week one, no less, to offset the Bills and Josh Allen. Still, an early season version of this particular matchup could offer some challenges that Buffalo might not like, as opposed to later in the season. It’s been very warm in the southland as of late, and cold weather teams coming out here might be thrown off until things cool off a bit. Not that the Bills haven’t seen warm weather in spots this summer, but it’s ratcheted up a notch in SoCal. Not to mention the inherent advantages that a Super Bowl winning team enjoys in a week one home game against a team traveling 3000 miles. It’s food for thought.

Do We Have the Wrong Image of Each Team?

The current median perspective of each team almost runs counter to reality in a way. Entering this season, more people are juiced-up about the Bills than the Rams. And there is a reason for that, namely the potential for a Super Bowl hangover with the Rams, countered with the rapid upward trajectory of Josh Allen and the Bills. Buffalo is unarguably the more up-and-coming team of the two. Last season, however, the Rams won more games and won the Super Bowl, with Buffalo only getting to the divisional round and losing in one of the most heartbreaking ways ever. Even if you suspect the Bills will eclipse the Rams this season in terms of overall team performance, you can’t deny that this might all be in our head and what has actually happened suggests something else, perhaps.

Something Has to Give

Having last year’s Super Bowl champ going against this year’s preseason Super Bowl favorite is a good way to kick off the season. The tendency in a matchup like this is to focus on the offensive side of the equation. You have the run-happy Josh Allen with a wealth of differently-skilled pass-catchers. When they’re on, it’s a thrilling display of offensive firepower that will test a somewhat-revamped Rams’ secondary. The Bills will be facing extreme heat from Aaron Donald and the Rams’ still-tough front, but their O-line is intact, and Allen can scoot with the best of them. I’m not sure the opposite can be said of a Bills’ defensive front that is growing in power and will really test the new pieces along the Rams’ O-line. And the less-mobile Stafford is getting up there and can use all the help he can get.

And sure, questions are still abound as to how rigid the Bills’ secondary can be. They can play with a wide range of form. And if some of their new pieces don’t hit the ground running, Stafford and guys like Cooper Kupp can really rack up production. While the Rams did add some pieces, with youngsters perhaps ready to contribute or perhaps veteran Allen Robinson, the aerial attack looks muted from what we saw at the end of 2021. Van Jefferson had two off-season knee surgeries, Robert Woods is gone. Odell is out, and it’s just the not the fearsome package it was a short time ago.

Again, this could all be steeped in fallacy—the projection of the Bills taking the next step and the notion that a Super Bowl hangover could manifest with a Rams’ squad that made some good moves but seems somewhat de-poofed from what we saw last season. I sense a game where neither offense is really able to let it fly. If that’s the case, the total of 52 might have some upside with the “under.” That could be an alternative for those who are thrown by the idea of giving up 2.5 points at home to the defending kings of the NFL in week one. Nevertheless, I sense the Bills are a little more primed to start the season well than the Rams, and I’ll lay the 2.5 on Buffalo.

Loot’s Prediction to Cover the Point Spread: I’m betting on the Buffalo Bills minus 2.5 points. Kick your NFL season off right with a 100% real cash bonus up to $500 when you use bonus code PREDICTEM at Betnow Sportsbook!