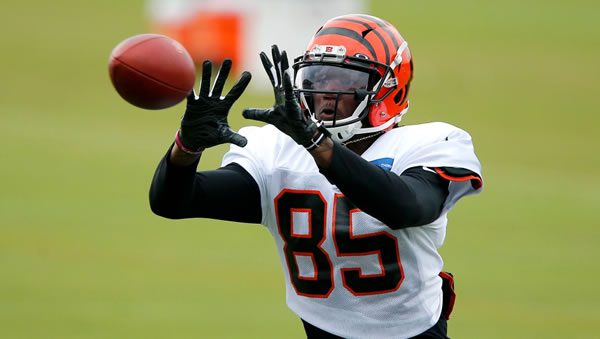 The penultimate weekend of this NFL season concludes with a very possible preview of an upcoming AFC playoff bout when the 12-3 Bills visit the 11-4 Bengals for this year’s final edition of NFL Monday night betting action.

Buffalo just clinched a third-straight division title but still seeks to secure the top seed for the upcoming AFC playoffs. Cincinnati just clinched a playoff berth but could also yet steal that No. 1 spot.

Which way are we going here with our free NFL betting pick?

The Week 17 NFL betting odds opened Buffalo as a two-point road favorite for Monday night, with an over/under of right around 49.5. Early betting action then edged that spread down to -1.5.

Buffalo rides a six-game winning streak into Monday night after beating the Bears in frigid Chicago last Saturday 35-13. The Bills spotted Chicago the first seven points of the game and trailed 10-6 at the half. But Buffalo scored touchdowns on its first two possessions of the second half to take the lead for good, then tacked on two late scores to secure the W and the cover at -8.

Buffalo has now out-gained four of its last five opponents and out-rushed six of its last seven foes.

At 12-3 overall, the Bills are tied with Kansas City for the best record in the AFC and own the head-to-head tie-breaker on the Chiefs, thanks to that 24-20 victory at Arrowhead back in October.

Cincinnati, meanwhile, rides a seven-game winning streak into Monday night following a 22-18 victory at a cold New England last Saturday. The Bengals drove their first two possessions of the game to touchdowns and led 22-0 at the half. Cincinnati then clammed up and let the Patriots get within one score with six minutes left. Near the end, the Bengals looked like they might blow the game but got lucky and recovered a fumble inside their own 10-yard line, securing the win and the money at -3.

Cincinnati out-gained New England 442-285 and dominated time of possession by a 37:23 split.

At 11-4 overall, Cincinnati sits in the No. 3 spot in the AFC, one game behind Buffalo and Kansas City. And the Bengals also own the tie-breaker on the Chiefs thanks to that 27-24 win over KC a month ago.

These teams last met three seasons ago, a 21-17 Buffalo home victory. Josh Allen quarterbacked the Bills that day against Andy Dalton for the Bengals.

Buffalo is out-rushing opponents by 39 YPG this season. Cincinnati is getting out-rushed by eight YPG this season. And in the NFL, teams that win the ground battles cover the spread about 65 percent of the time. Also, the Bills produced the better yardage performance vs. common opponents this season. This should be a close one, as the line indicates, but we just think Buffalo is the slightly better team in this match-up. We’re betting on the Bills Monday night.