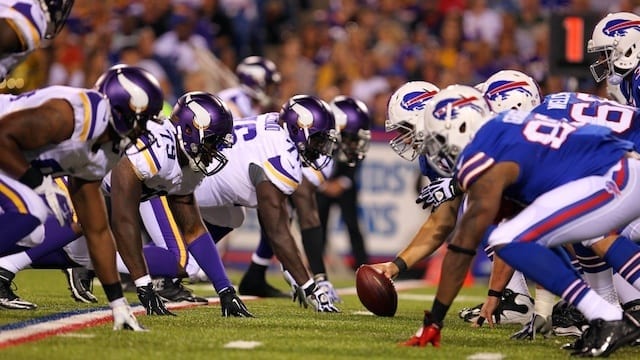 The Buffalo Bills and the Minnesota Vikings will square off in a cross-conference collision when the NFC North meets the AFC East at U.S. Bank Stadium in Minneapolis, Minnesota. The game will begin at 1:00 PM ET and will be aired for regional audiences on FOX. Due to NFL scheduling, these teams only meet every four years unless they managed to find themselves in the Super Bowl. Neither team have not been in decades, so the last team they met was in 2014 where the Bills edged out the Vikings at home by a score of 17-16. Generally speaking, the Bills have won three of the last four contests between both parties. Both teams have split against the spread over this span.

The NFC North Will Be A Dog Fight

The Vikings come into this contest off the heels of a draw in Green Bay against Aaron Rodgers and the Packers. In this contest, we saw the Vikings open as low as a 2.5-point underdog before the Vikes would cross over and close as a two-point favorite. The final in Green Bay was 29-29. As the defending NFC North Champion, there is a lot of hype surrounding this unit as it seemingly got better at the quarterback position with the acquisition of Kirk Cousins in the off-season. Minnesota’s offense so far has done the trick as they have scored 53 points in their first two games combined.

Heading into this contest, the Bills may be very much off the Vikings’ radar as they will be off to meet the Los Angeles Rams next Sunday in the City of Angels. The meeting between the Rams and the Vikings is a fixture that many analysts suspect could very well decide the fate of the NFC Champion come January as the two teams are among the favorites to go to the Super Bowl.

Are The Bills The New Cleveland Browns?

2018 has not gotten off in the way that the Bills would have liked to see after erasing their noisome playoff drought in 2017. The Bills have been getting mangled in every game they have played so far this season. Against Baltimore, we saw the Bills manhandled by a score of 47-3. Buffalo would follow up this ghastly result with yet another egg, falling to the Los Angeles Chargers by a score of 31-20 last Sunday. The Bills’ metrics are just frightening. This unit ranks 31st in points scored (11.5 ppg), total offense (223 yards per game), and passing yards (139.5 yards per game). This is followed up by Buffalo surrendering a friendly 39.5 points per game to opponents once again placing them at the bottom of the barrel in that department (31st in the league).

With the posting of these numbers by Buffalo in two consecutive weeks, many analysts have likened this edition of the Bills to what we have seen out of the 2016 and 2017 Cleveland Browns. Dumpster fire is the term some have coined to describe this football team.

As bad as Buffalo may appear to be, one must not forget that the NFL is a professional league. These players are the best football players in the world and the competitive quality that separates the Vikings and the Bills is not as stark as perhaps this line may indicate. The NFL is full of parody, it is hard for any time to go undefeated and moreover it is hard for any team to go winless. Sure, the 2017 Browns may have attained that accolade but it was only the second time in NFL history a team has gone winless. Going perfect? That only happened once in 1979 with the Miami Dolphins. This is a testament to how deep this league truly is.

Expanding upon this concept, the line featured here is outrageous. It is a product of an overreaction to how Buffalo has fared in the beginning stages of this season. We have yet to see the Bills foster a cover and more importantly they have looked like a team that cannot stop a pee-wee team so far this season. With all these implications, they seem like a snack for Minnesota to feast on. The only way any book can get any taker to back this team is by inflating the points to entice action on the Bills. So far, the number presented here has not done the trick as a majority of the consensus feel inclined to lay the lumber. This line will likely move further making it even easier for Buffalo to come in under this number given the backdoor potential that can also manifest in such a lofty tag.