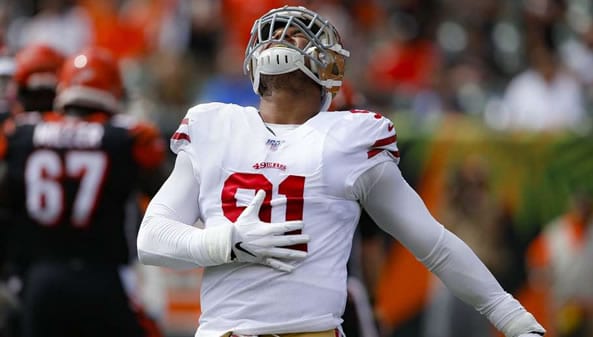 The defending NFC Champions, in the San Francisco 49ers, will kick off their season with a pivotal division match-up against the Arizona Cardinals this Sunday at Levi’s Stadium. Last year the 49ers took a huge step forward in Kyle Shanahan’s 3rd season in the bay. After posting a 4-12 record in 2018, the 49ers became the breakout story in the NFL with a 13-3 record that led them straight to the Super Bowl. With 18 of 22 starters returning from last year’s NFC Championship team, the question becomes, can the 49ers sustain their success as the top team in the conference? Perhaps Sunday’s match-up against the Cardinals will help answer that question because Arizona promises to present a difficult challenge as one of the league’s rising contenders.

Despite finishing last in the division in 2019 with a 5-10 SU record, Cardinals fans have reasons to be excited in 2020. For starters, Head Coach Kliff Kingsbury will get to build off last year’s improvement. Kingsbury inherited a 3-13 team before 2019 and nearly doubled the wins in his first season. More importantly, the Cardinals have a ton of talent on the offensive side of the football for the first time in recent memory that should only get better with more playing time. If you throw in the draft selection of LB Isaiah Simmons and the full return of CB Patrick Peterson into the mix, the Cardinals are starting to fill many holes with strong talents. If things can just go according to plan, Arizona should take another step in the right direction!

Cardinals offense should be dangerous in 2020

One of the most significant moves of the offseason came in March when Arizona acquired WR DeAndre Hopkins from the Houston Texans involving a deal that sent David Johnson to Houston along with primarily a 2nd round pick. By all accounts, it was a brilliant deal for the Cardinals to acquire one of the best wide receivers in the league and somehow got value out of David Johnson. He had already lost his starting position to running back Kenyan Drake. Now the Cardinals offense will feature the rising talent of quarterback Kyler Murray, the elusive threat of running back Kenyan Drake, and a talented group of receivers led by Hopkins, Christian Kirk, and Larry Fitzgerald.

Obviously, the Cardinals have a plethora of talent at their disposal. How Kingsbury utilizes the talent will likely be heavily scrutinized. The offensive line remains a concern, and Murray was inconsistent for much of the 2019 season. However, if both can improve in some form or fashion, the Cardinals should be a much better offense moving forward. I still have some concerns about Kenyan Drake can back up his incredible output from last year and/or stay healthy for an entire year. Even if that does not happen, backup running back Chase Edmonds may be one of the best backups in the league that nobody has ever heard of. Simply put, Arizona will be exciting to watch throughout the season.

Despite the 49ers success in 2019, Arizona provided a tough out on two separate occasions in weeks 9 and 11, losing by just 13 points combined. Judging by the uptick in talent on Arizona’s offense, the first knee-jerk reaction is that the Cardinals should have an even better chance to take down the 49ers in the opener this Sunday. However, the 49ers’ strengths are where the Cardinals are weak along the interior fronts on both sides of the football. The 49ers strong rushing attack led by Raheem Mostert and Tevin Coleman will take aim at a relatively weak run stop defense in Arizona. The Cardinals were torched by opposing tight ends on a weekly basis last year, which sets up perfectly for one of the best talents in the game in 49ers TE George Kittle.

On the defensive side of the ball, the 49ers have elite pass rushers in defensive ends Arik Armstead and Nick Bosa, who combined for 19 sacks last year. By every stretch of the imagination, both players should be better in 2020 if that is possible. For Arizona, this presents a daunting challenge from an offensive line that has failed to perform and one of the main contributors to Murray’s throwing inconsistencies. Despite the increase in talent, Arizona’s ceiling in 2020 largely falls on the offensive line, and this Sunday’s match-up against the 49ers is not exactly ideal. For that reason, I will back the 49ers this week until I see confirmed improvement from Arizona’s interior. However, I would advise only a small play as there are likely better betting opportunities in other games on Sunday.