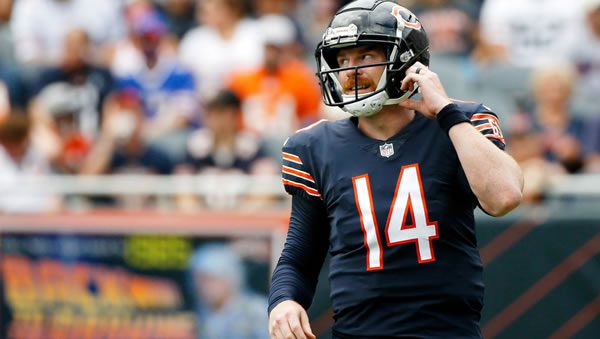 Point Spread: CHI -3.5/DET +3.5 (Betanysports - These guys give you the ability to bet on games at -105 odds instead of -110. This saves you an ENORMOUS amount of money over a season and THOUSANDS of dollars over the long haul!)

The Chicago Bears come to Ford Field to take on the Detroit Lions in an NFC North division Thanksgiving special on Thursday. Both teams came up short in close games on Sunday and now make the quick turnaround. Chicago fell to Baltimore, 16-13, for their fifth loss in a row. They have only covered the spread once since October 10. They now take on Detroit in a matchup that gave way to one of their few wins this season. This one is at Ford Field. The Lions covered the spread on Sunday against the Browns but fell short in a 13-10 snoozer. Who can help make Thanksgiving a little better for us by covering? Let’s break it down!

Clues from Part One?

We’re at a time in the season where we’re seeing divisional teams rematching, and we do this week with the Lions and Bears. An October 3 meeting would seem to be recent enough to find some information. A 24-14 win for the Bears went by without notice from the NFL world, and it didn’t deserve any with an uneventful game. Chicago running back David Montgomery romped early for two touchdowns, as the Bears built up a 21-0 lead. The Lions came on a bit, with two Jared Goff touchdown throws to WR Kalif Raymond, but it was too little, too late.

It doesn’t help two struggling teams when both starting QBs are dealing with issues. With Jared Goff out of action with an oblique injury, the Lions went with Tim Boyle. On the one hand, this is the second NFL roster Boyle has made, but it’s hard to figure how a guy who had such dicey college stats would be in this position. He threw for 77 yards and had two picks against the Browns on Sunday. Other than D’Andre Swift, who had another big game on Sunday, it’s pretty slim pickings. And if a former first overall pick in Goff can barely extract anything from this group, what are the prospects for a guy who had one TD and 13 picks as the Connecticut QB?

Chicago’s quarterback problems aren’t as dire. With a rib injury, Justin Fields left the last game. Andy Dalton came in and threw two TDs. So either way, they go, there is some promise. Fields was playing really badly on Sunday but had generally been looking better the last few weeks, even in losing efforts. But Dalton is a steady hand and if anything offers this offense a little more aerial upside, connecting well with Darnell Mooney and Marquise Goodwin on Sunday, both of whom had 100+-yard games.

Matchup Problems for Detroit That Could Resurface

All season, we see opposing running backs really have their way with this Detroit defense. Unfortunately for them in this divisional matchup, they face a Chicago team where running the ball is their main asset. With Montgomery back after missing some time, along with the lively legs of Dalton or Fields, and all the other capable backs on this team, it’s not going to be easy for the Lions to stop. They couldn’t do it the first time, quickly taken out of their game by the effectiveness of the Chicago run. It’s not a picnic trying to cover a spread when opposing backs are moving the chains at will and breaking off big ones all day.

Ranked last in the NFL in terms of aerial offense, it’s hard to say Chicago could have that in their favor. And whereas Detroit has been ghastly against the run, they’re respectable against the pass. But especially if Dalton is in there, with the short week likely being problematic for Fields’ quick return, it’s a part of the Detroit offense that could be sneaky-good. And some of the high points of the Chicago passing game this season have come with Dalton under
center. But again, the Lions have been showing greater resistance in this area.

Hope for the Lions

After a 4-game winning streak on Thanksgiving, the Lions have now dropped four in a row. They’re due, and they at least get another spiraling opponent in the Bears. It’s a tough game on the short week for the Bears against a Lions team that hasn’t been horrible lately—getting a tie against the Steelers and then losing by a field goal against Cleveland. Since coming off the bye, we aren’t seeing a Detroit defense getting its doors blown off, allowing a total of 29 total points in their last two games. They’re getting turnovers and making more big plays and key stops. This notion might get tested when they take on better offensive teams, but that’s not what they’re facing this week. The Lions are in a game that looks to be a grind, at home against a team that has found winning elusive lately. It’s as good an opportunity to notch a win as they’re going to have.

The drawbacks in making this move are numerous just on the basis of the murky Detroit QB situation. When you bet on a team and see Tim Boyle running out there as the starting quarterback, it’s hard not to ask some difficult questions about the moves you’re making in your life. But they do have Swift, who might be the most dynamic presence on the field, along with a defense that has thrived in this context in recent weeks. I see the Lions covering the spread in their Turkey Day game. I’ll take Detroit.

Loot’s Prediction to Cover the Point Spread: I’m betting on the Detroit Lions plus 3.5 points. Bet your Thanksgiving Day NFL picks for FREE by taking advantage of a 100% REAL CASH bonus on your first deposit of $100 to $300 at MyBookie Sportsbook! (Must use bonus code PREDICT100 when signing up).