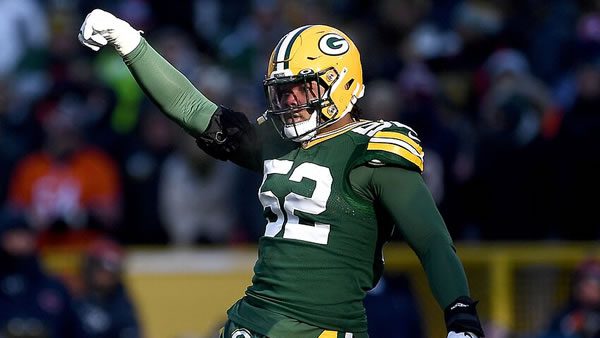 Point Spread: CHI +12.5/GB -12.5 (Bovada - Live betting is the best thing since sliced bread and this sportsbook has the ABSOLUTE BEST platform in which to partake! Check it out!)

The league’s most-played rivalry is set for another tilt on Sunday night as the Chicago Bears head into Lambeau to take on the Green Bay Packers. This will be the 204th meeting between these historic teams, and while the all-time series is close, Green Bay has dominated for the last decade-plus, going 20-4 since the start of the 2010 season. Aaron Rodgers has a career rating of 107.7 against the Bears and threw for two touchdowns during a 24-14 win back in Week 6. Green Bay could win the NFC North by beating Chicago and getting some help while the Bears are clinging to some very dim playoff hopes. Justin Fields is still nursing some bad ribs but may get the start this Sunday with Andy Dalton in position if Fields cannot go. Fields had Chicago within three points in the fourth quarter during the first meeting, and an upset this weekend would likely be the highlight of an otherwise disappointing season.

Chicago is riding several poor trends ahead of this game, including a 1-6 ATS record in their last seven overall with an 0-5 ATS mark in their last five conference games. The Bears are 3-9 against the spread in the last twelve against the NFC North and have just one ATS win in their last five trips to Lambeau. Green Bay is a league-best 13-3 ATS heading back into last season, and they are riding a five-game ATS win streak at home. They are 6-1 ATS in the last seven as the favorite and have a 21-7 ATS record against the Bears over the last 28 meetings. The under looks like a good play, with eight of the last eleven falling below the total for Chicago and seven of the last nine for Green Bay. This is the biggest spread of the week, but it isn’t affecting Green Bay bettors as 65% of the public is on the Packers side.

2021 wasn’t supposed to be an exciting year in Chicago, but six losses in the last seven games have sent the Bears near the bottom of the NFC, and that one win came against the then winless Lions. Key injuries have hampered this team, but a general lack of quality play on both sides of the ball has landed Matt Nagy on the hottest seat in the league. Chicago has never replaced a coach in-season, but a bad showing on a national stage just might be enough to have Nagy packing his bags. The Bears enter the week as the worst passing offense in the league, averaging just 173 yards per game. The overall QB rating is third-worst at 73.8, and don’t look for that to improve with Green Bay in the top-10 in average rating allowed. That ineptitude through the air has erased the efforts of the 8th ranked run game, and Chicago is averaging just 16.8 points per game, good for 30th in the NFL. The Bears do have a solid duo of young pass-catchers in Darnell Mooney and TE Cole Kmet, but the QBs haven’t been able to find them consistently. Chicago is 24th in giveaways and 29th in third-down conversions, further cementing their claim to what could be the worst offense in the league. The defense has been better with a top-10 rank in total yards allowed and the third-most sacks thus far, but the turnovers are lacking, and 23.9 points per game allowed ranks 22nd. Robert Quinn leads the team with 11 sacks and Roquan Smith’s 74 tackles; good for 3rd in the league.

Green Bay could have the division all wrapped up by the end of the night, provided they win and Minnesota takes an L earlier in the day. There would still be plenty to play for, but clinching a playoff berth would be huge for a Packer team that is dealing with some significant injuries that don’t include pinky toes. The ability to hold David Bakhtiari out until he is as ready as he can be could be pivotal come playoff time. Any chance of getting guys like Za’Darius Smith or Jaire Alexander back are improved with the team having the luxury of not needing to rush the rehab process. Aaron Rodgers has the pass offense near the league average in terms of yards per game, but his 23 touchdowns and four interceptions are again MVP-worthy. Rodgers has one multi-INT game against Chicago in 26 career starts and has completed 75% of his passes over the last three games in this series with ten touchdowns. Aaron Jones and A.J. Dillon represent one of the best RB duos in the league, with both seeing success on the ground and in the passing game. They have combined for nearly 1,700 scrimmage yards and 11 total touchdowns. Davante Adams is sixth in the league with 80 receptions and is just one of four receivers to crack the 1,000-yard mark. The defense has been a consistent performer and is top-10 against both the run and the pass while allowing a 5th-best, 20.2 points per game. Rashan Gary leads the team with 11.5 sacks, while De’Vondre Campbell quietly sits at 8th in the league with 69 solo tackles. CB Rasul Douglas has been a gem of a free-agent add with eight pass breakups in just seven games.

Green Bay has Plenty in the Tank

Rivalries tend to produce close games, but Green Bay has usually run away with things when they have the better horses like they did last year when they won by 16 and 19 in the two meetings. The Week 6 contest was a 10-point affair, and while it was close on the scoreboard, it never felt like Green Bay was in danger of losing. Rodgers only attempted 23 passes as GB ran the ball and controlled the clock. Khalil Mack had an impact on that game with a sack, but he will not suit up for this one with Akiem Hicks listed as questionable. This defense has limited Green Bay in the past, but only when they have been at full strength, especially the pass rushers. Rodgers hasn’t settled on a consistent #2 receiver behind Adams, but any number of pass catchers have had their moments, and that will make it tough for Chicago to stall the offense. Allen Lazard, Marques Valdez-Scantling, and Randall Cobb have combined for ten receiving touchdowns, and the volume of potential playmakers for Green Bay really puts them over the top inability to get points on the board. Chicago just doesn’t have the same depth or quality of playmaker, and it will handicap their ability to keep up. Green Bay scores a 29-14 and covers a big spread.