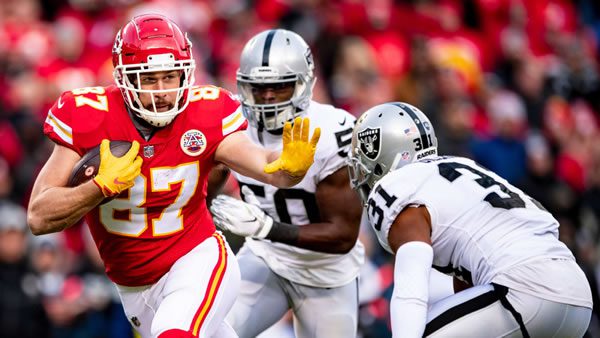 Point Spread: KC -9.5 (SportsBetting - One of the player’s favorites football betting sites on the web!)

After struggling through the first half of this season, the Kansas City Chiefs, led by their defense, are riding a five-game winning streak into Sunday afternoon’s AFC West rivalry bout with the Raiders at Arrowhead. KC also owns the upper hand in the recent rivalry with Oakland/Las Vegas, winning seven of the last eight meetings, including a blow-out in Sin City earlier this season.

The Chiefs are favored by almost double-digits for this one. Who do we like here for our free NFL betting pick?

The Week 14 NFL betting odds opened KC at -9.5 over Las Vegas, with an over/under of right around 48. Both those figures were holding steady in the early betting action.

After starting this season 5-2, Las Vegas is just 1-4 both SU and ATS since, following a 17-15 home loss to Washington last week. The Raiders allowed the Team to drive the opening possession of the game 75 yards to a touchdown but only trailed 7-3 at the half. Vegas later rallied to lead 15-14 with just over two minutes to go but let Washington go 44 yards to a field goal with 37 seconds left and couldn’t respond.

Las Vegas actually out-gained the Team 310-298 but got out-rushed 112-76 and lost time of possession by a 34:26 split. The Raiders also dropped an interception that would have clinched the game on Washington’s final drive.
Las Vegas has out-gained six of its last eight opponents but only out-rushed one of its last nine foes. On the season, the Raiders are getting out-rushed by a per-game margin of 125-88, and in our book, that’s not good.
Still, at 6-6 overall, Las Vegas is only one game behind 7-5 Buffalo in the battle for the No. 7 spot in the AFC playoff standings.

Kansas City, meanwhile, is 5-0 SU, 3-2 ATS its last five times out after beating Denver at home last week 22-9. The Chiefs drove their first possession of the game 72 yards to a touchdown but only led 10-3 at the half. KC then scored the first 12 points of the second half, the last six on a game-clinching pick-6 early in the fourth quarter, and held on from there for the victory and the cover at -8.5.
The Chiefs actually got out-gained by the Broncos 404-267, out-rushed 154-89, and lost time of possession by a 33:27 split. But KC also won the turnover battle 3-1, creating a +10 points differential, and stuffed Denver on a key fourth down in the first half.
Kansas City has now out-gained and out-rushed three of its last five opponents. The Chiefs have also allowed a total of just 56 points over their last five games.
At 8-4 overall, KC leads the AFC West by one game over the 7-5 Chargers, and it only trails 9-4 New England by a half-game in the battle for the best record in the AFC.

Kansas City is 7-1 SU, 5-3 ATS over the last eight meetings with Las Vegas/Oakland. Most recently, one month ago, the Chiefs beat the Raiders in Vegas 41-14, easily covering as three-point favorites. KC only led that game 17-14 well into the third quarter but ended the game with a 24-0 run.
The Chiefs out-gained the Raiders that day 516-299.
Also, that game played over a total of 53.5.

Kansas City holds advantages in the coaching match-up, at quarterback, in the running game, and on defense. Also, the Chiefs just out-played Las Vegas a month ago by over 200 yards. So while the line on this game seems a couple of points too high, we’ll give the points with KC. Did you know that we employ (2) professional handicappers that win every season that give out their picks for FREE on our free picks page? They’ll start releasing basketball picks on Monday! Bookmark that page and reap the benefits by hitting it daily!