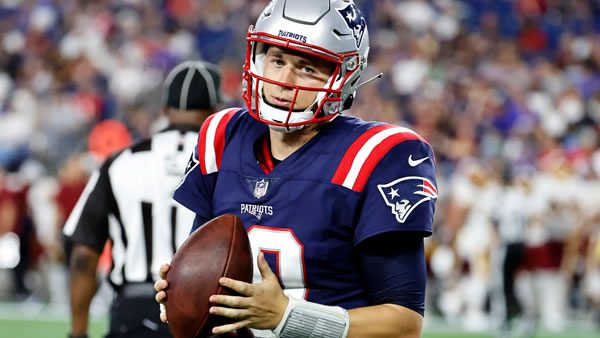 The one good thing about getting the Thursday night game for Chicago was the extra preparation time it gave the Bears. However, that might not be enough given just how limited the Chicago offense is in going up against a rapidly improving New England defense. The Patriots looked dead in the water after getting rocked by Baltimore in Week 3 and losing Mac Jones to injury, but they’ve now won two straight and looked very good doing it.

And that’s why New England’s back to Brady-esque lines at home, as the books believe that New England is back on form and ready to challenge for a wild card spot in the AFC East. The Patriots certainly have an uphill climb on their hands in sharing a division with Buffalo and the surprising Jets, but at 3-3 and with a defense that only gives up 18.8 points per game, New England is in far better shape than people expected.

Chicago, on the other hand, is not. The Bears haven’t made any progress with Justin Fields under center, and they’ve now fallen three games back of Minnesota with the Vikings owning a tiebreaker. The Bears weren’t expected to make much of a run at the postseason anyway this year, but they were thinking that Fields would be showing signs of progress by now. Instead, the Bears’ defense has played well but the offense has really struggled. Against a defensive genius in Bill Belichick, it’s hard to see Matt Eberflus’ team coming out on top in a defensive showdown.

How the Public is Betting the Chicago/New England Game

The Bears’ running game is good. The Bears’ passing game is very, very poor. Here’s how bad the Bears are at throwing the football: leading receiver Darnell Mooney’s 241 receiving yards is 41 yards short of quarterback Justin Fields’ total of rushing yards, and no other Bear has more than 150 yards through the air on the season. Khalil Herbert and David Montgomery have given the Bears a solid ground game, but when Fields has to go to the air, shield your children’s eyes.

His yardage numbers aren’t great, but what really makes things stand out is that he’s tossed five interceptions against just four touchdowns. Fields has just 869 passing yards on the season, and the Bears rank dead last in the league in throwing the football. The weather getting colder should turn things in the Bears’ favor, but teams know full well that Chicago cannot move the ball on long-yardage plays. Given that the Patriots are coming off a game in which they invited the Browns to throw the ball and dominated the game because Cleveland couldn’t do it, this looks like a really bad spot for the Bears. When Bill Belichick has something he can exploit in the other team’s offense, it’s usually a bad day for the Patriots’ opponents.

Who does Belichick turn to as the New England quarterback? Does he stick with the fully healthy Bailey Zappe, who has won his past two games and has looked pretty good while doing it? Or does he go back to the questionably healthy Mac Jones, who hasn’t looked all that great when he’s had action this season? New England seems to be leaning toward Jones, who is starting to get back on track health wise but has struggled, which could suggest that Belichick considers this the ideal opportunity for Jones to get his feet wet again.

The biggest issue with Jones has been throwing the ball to the other team instead of to his own. With five interceptions to his name already and just two touchdowns, Jones has a lot of growth to make in a tough division. The Bears might not be the best choice for him to come back, unless Belichick plans to attack Chicago by sticking with the ground game. Chicago’s run defense has been a horror show this season and Rhamondre Stevenson’s running game has helped Zappe quite a bit. Jones is likely to rely on Stevenson and pick his spots against the Bears’ solid secondary.

These teams don’t come across each other often, so there isn’t a lot to go on from the Bears’ four times failing to cover against the Patriots in their past four matchups. However, Chicago has been poor no matter where or when it plays, as it’s failed to cover in five of its past seven road games and has one cover in six in October. Meanwhile, once New England gets rolling, it’s tough to stop that momentum. The Patriots are 8-2 ATS in their past 10 games after a win, and Belichick usually gets everyone working in the same direction after a slow start.

As for the totals, New England’s offense seems to get in gear at home, as seven of the past eight at Foxboro have gone over the total. However, Chicago tends not to cooperate with that; the Bears have played under in 11 of 13.

Not the best night for the fans with a decent chance of rain and temeperatures in the high 50s, but it shouldn’t impact what the offenses can do.

With Chicago’s awful run defense, it doesn’t seem to matter who New England starts in this matchup. In either situation, whether it’s Zappe or Jones, the Patriots will run the ball and the Bears probably won’t be able to stop them.

Plus, there’s no way I’m trusting Justin Fields against a Belichick defense. Give me the Patriots.