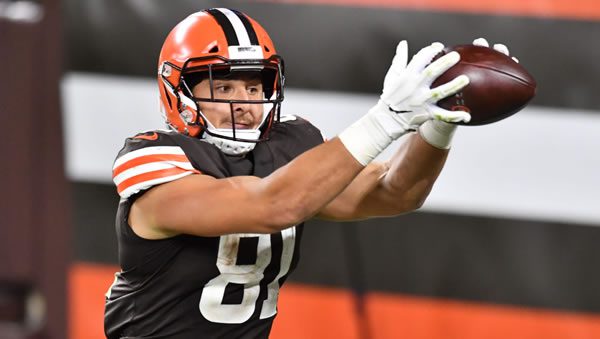 Arrowhead stadium is the site for what might be the best game of NFL week 1. The Cleveland Browns head west to see how they stack up against the defending AFC champion Kansas City Chiefs. Betanysports (-105 odds on sides/totals!) has made KC 6 point favorites and set the game total at 53. The play is to take the 6 points with the Brownies. Here is the handicap.

The Browns Defense Will Slow Down Mahomes

I don’t have to spend much time explaining how explosive the KC offense is. They have the best quarterback, a top 5 and arguably the best receiver, the best tight end in the league, and probably the best offensive mind making the game plan and calling the plays. They were 6th in points scored last year and 3rd in yards per play but were often taking their foot off the gas late in games. Coach Andy Reid returns all of his key skill players except #2 wideout Sammy Watkins who can be easily replaced. Where Reid will have more difficulty filling gaps this season and especially this week, is on the offensive line. Our last memory of KC last year was a porous line allowing constant pressure on QB Patrick Mahomes in the Super Bowl, and we should see the same thing in week 1. KC has revamped their O-line coming into 2021, but they are counting on two rookies in the middle of the line and 3rd round 2020 draft choice Lucas Niang at right tackle, who will be opposite all-world defensive end, Myles Garrett. Reid’s offensive line has received rave reviews in training camp and pre-season, but nothing the line has done in shorts will have the 100% ready for what they will face against the Browns stout D-line.

Joining Garrett on the Brown line are two newcomers to Cleveland - Malik Jackson and Jadeveon Clowney. Both are veterans that are better at stopping the run than rushing the passer but will be able to apply pressure to Mahomes this week. Anthony Walker has joined the Browns at middle linebacker to patrol the middle of the field and will be part of a committee assigned to keep Travis Kelce and Clyde Edward-Helaire under control. Kelce had eight catches for 109 yards when KC knocked the Browns out of the playoffs in the division round last year. Cleveland will have to do a better job of containing Kelce and Tyreek Hill. Cornerback Denzel Ward will get the primary responsibility of dealing with Hill but will get some help from the balance of the secondary, including newly added safety John Johnson. There is no team that has a defense that could shut down the Chiefs week in and week out, but the Browns will be one of the biggest challenges the KC offense faces, made much more difficult since it is a Week 1 game.

Balance is the key not only to the Brown defense but the offense as well. Cleveland boasts a top 5 running game and compliments it with a superb play-action passing game. They were 14th in the league in points scored last year, but they were 3rd in rushing and 7th in the league, converting 45% of their 3rd down attempts. Coach Kevin Stefanski took over the reins for the Browns in 2020 and was a very pleasant surprise. His gameplans exploited the strengths of his players, especially his quarterback Baker Mayfield. Mayfield’s completion percentage moved up to 63% from 59% in 2019, but most importantly, he only threw eight interceptions last year compared to 21 the previous year. Mayfield should continue to improve in 2021, starting in week 1. Odell Beckham Jr. returns to the lineup after missing the majority of last season with a knee injury. Beckham has never gotten on the same page as Mayfield, but he is still an elite talent, so if Stefanski can figure that out, it will cause the Chiefs a lot of problems. Nick Chubb is still the centerpiece of the offense, running behind an elite set of blockers. Chubb averaged 5.6 yards per carry last year, 5.4 against the Chiefs in the division round, and should get at least that in week 1.

KC’s defense will be challenged by the Browns’ diverse attack. KC was 10th in points allowed last year but only 20th in yards per play. They are built to play from ahead where they can put all their focus on rushing the passers. They allowed 4.5 yards per carry last year, so when a team stays close and is not in catch-up mode in the 2nd quarter, they can sustain drives, put points on the board and keep Mahomes on the bench. Cleveland is just that team. Look for the Browns to stay patient on offense, wear down the KC defense, and stay within striking range for the full game.

These Teams Are Evenly Matched

Without a doubt, KC is the cream of the crop in the AFC. But what AFC team matches up better than the Browns. Cleveland has the balance that the Bills and Titans don’t have and a better passing game than the Ravens. Cleveland had worn out the KC defense in their 2020 playoff game and outscored the Chiefs in the 2nd half 14-3, though the Chiefs did get a big stop deep in the 4th quarter. Andy Reid made a brilliant play call with time running down that locked up his squad’s 5 point victory. The Browns proved in that game they could go into Arrowhead and compete with one of the two best teams in the league, and they should follow up with an equally impressive performance this week.

Take the Points and the Browns

KC will be a favorite public bet this week, so the line could edge up to 6.5 closer to kickoff. Look for Cleveland to keep this game close, maybe have a chance to win in the 4th quarter, and certainly cover a 6 or 6.5 point spread. Kick your season off with a winner before you even place your first wager! Get yourself a 100% bonus on your first deposit up to $1000 at BetNow Sportsbook! This is a REAL cash bonus!