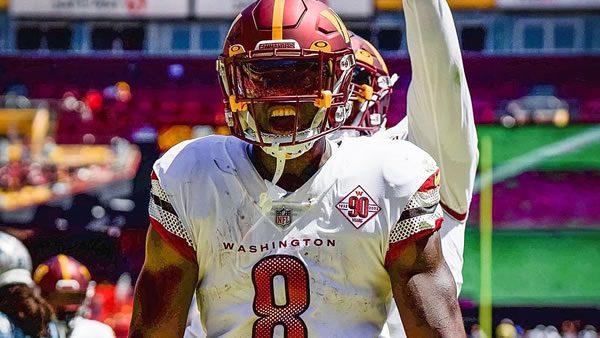 Point Spread: CLE +2/WAS -2 (Everygame – Get a SPECIAL unadvertised 100% real cash bonus up to $500 when you enter bonus code PREDICTEM on their special offers page AFTER you make your first deposit and BEFORE you place your first bet! They’re the web’s oldest and most trusted bookie!)

The Cleveland Browns take on the Washington Commanders on Sunday in week 17 action from FedEx Field. The Browns are 6-9, coming off a 17-10 loss to the Saints last week. They’re in a lost season but still trying to work on things to close out the year. They come into Landover on Sunday to face a Washington team that has dropped two in a row yet still can clinch a playoff spot if they win their last two games, both of which are at home. Can they bounce back from two straight losses and make a little run, or will Cleveland come in and spoil their plans? Let’s break it down!

Can Washington Bounce Back?

This is a good litmus test to see if Washington still has it in them this season. After making a nice run, they ran into a Giants’ team that played a good game before running headlong into a streaking San Fran team last week. They now catch a Cleveland team that has scored a combined 33 points in the last three games. While Washington wasn’t able to keep it together well last week against the Niners, this could be a spot where Washington rediscovers its defensive edge. Before last week, the Commanders’ defense had not allowed more than 21 points since week four. With some pieces getting healthier, they look to really control a suffering Cleveland offense at home this week.

With things going sideways last week against the Niners, the Commanders went with Carson Wentz under center with Taylor Heinicke struggling. I’m not sure enough happened with Wentz to supplant Heinicke as the starter, considering it was Heinicke who helped lead Washington on the little run that put them in a position to be competing for a wild-card slot. And against the Cleveland defense, you’d think this is a decent spot for Washington, with their two-headed RB approach with Antonio Gibson and Brian Robinson, along with talented aerial pieces like Terry McLaurin, Jahan Dotson, and Curtis Samuel. Quarterback play has been an issue this season, so we’ll see who the Commanders turn to on Sunday.

What to Expect from Cleveland the Last Two Weeks

In the last two months, the Browns haven’t been terrible, going 4-4 and seeing their “D” playing at a more respectable level. The return of Deshaun Watson hasn’t really given way to better results offensively, as the maligned QB is still working toward getting back to top form. The production they’re getting on the ground from Nick Chubb is nice but hardly enough, with Watson not quite having found the grove with aerial talent like Amari Cooper, Donovan Peoples-Jones, and David Njoku. And despite what we saw from Washington on defense last week, this still seems like a strange time for Cleveland to hit a groove on offense, now on the road, out of conference, and playing a Washington team in desperate need of a win.

The Browns haven’t really been terrible, considering the hand they’ve been dealt this season. Opposing offenses haven’t struggled much against this defense. And offensively, they’ve been very challenged outside of the run game. And still, they’re usually pretty competitive. Sure, they can be chewed up on the ground, and that’s not something you want when playing the Commanders. But between their own run-game, the strength of their secondary, and some big plays on occasion on defense, they’re not always the sitting duck some people expect to see from week-to-week. A winnable spot perhaps, but they’re not really at the same level as other teams in the same spot might be. Watson is going to use this time to find his form again, and they’re still a team working toward bigger things.

More Picks: Get our Jags at Texans betting preview and pick for their 1/1/23 game

Show and Prove Spot for Washington

At the beginning of the season, the Commanders were operating on an almost-slapstick level at times, with a slew of mistakes and blown sequences. But things started coming together and they put together a big surge, making what at one point seemed to be a quixotic playoff run. And things came apart a little bit the last few weeks, much to their chagrin. But maybe facing a desperation-soaked Giants team and perhaps the hottest team in the conference in the Niners just made Washington look more off than they really are, and we’ll maybe see a regression towards the mean this week with what seems like a far more-negotiable opponent in the Browns.

It’s a clear line in the sand moment for Washington, and the urgency is at a crescendo with it setting in that this is a dire and urgent situation. I’d expect to see Washington going all out to secure this win and set up a likely scenario where they have a shot in week 18. Now facing a team whose agenda is far less-pressing than the last few teams they faced, Washington has no excuses at home. They look for their “D” to step up, with the greater weapons they have on offense delivering this week. That same offensive variety they’ve flexed at times over the second half of the season really needs to manifest now.

Lay the Short Number on the Home Team

This part of the season is a time where the urgency-card can be overplayed. And in all honesty, picking Washington in large part comes from them having something to play for, while Cleveland has a more unclear agenda. I just think it’s time to account for the inner resource of a team that worked really hard to buck the trend this year and get themselves in this position. I see the Washington “D” giving Watson a hard time while the Commanders’ variety on the ground and through the air gets them over the hump against the Browns’ road defense. I’ll take the Commanders in this one.

Loot’s Prediction to Cover the Point Spread: I’m betting on the Washington Commanders minus 2 points. Kick 2023 off right with free bowl game and Week 17 NFL bets! Deposit $100 to $300 and use promo code PREDICT100 and you’ll receive a massive 100% real cash bonus at MyBookie Sportsbook!