Jacksonville at Houston Prediction for Week 17 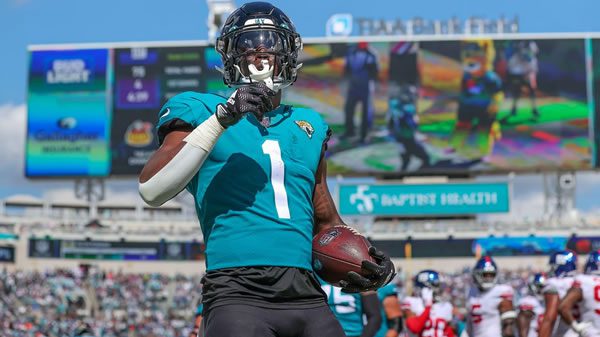 The Jacksonville Jaguars take on the Houston Texans in AFC South action from NRG Stadium on Sunday. The Jags are looking to take advantage of a ramshackle division where they are now knotted atop the division with Tennessee. Last week, they kept it rolling with a Thursday Night Football win over the Jets, 19-3. It was their third straight win, with a lot of things now clicking for the Jags. But they might not have the easy mark the Texans were earlier in the season. Last week, the Texans got their second win of the season with a 19-14 win over Tennessee, helping Jacksonville in the process, while serving notice that they’re not going to lay down for anybody. Who can cover the spread this week?

Will the Jags Go All Out?

From what I can gather, the winner of the AFC South will come down to next week’s game between Jacksonville and Tennessee, regardless of what happens to either team this week. That could really throw a different light on this matchup, particularly with the fighting spirit the Texans have shown in recent weeks, covering their last three spreads with abundant ease. On the one hand, we don’t have any word that Jacksonville is going to hold key pieces back or approach this as a throwaway game. And in reality, sub-.500 teams are only in a spot to get to the postseason because their division is so bad; maybe they shouldn’t be trying to play it cute. Why not continue to build on good momentum instead of stopping it now and hoping to fire it up again next week? It’s almost more of a ploy you’d see with a really well-established contender, not a team with a losing record.

So, as we approach game-time, we need to gather information on what Jags’ coach Doug Pederson has in mind for this week. If Trevor Lawrence and most of his pieces on the ground and aerially are looking to be a “go,” then I’d tend to approach this game in a pretty standard way. If Pederson elects to rest key pieces or even does a partial shutdown where key pieces on either side of the ball are given a de-facto bye week, then I think Houston has managed to command enough respect recently to make the Jaguars a less-than-appetizing choice here on the road.

How Dangerous are the Texans?

On one hand, you don’t want to get too carried away with a team that has extracted two wins out of 15 games. But at a time in the season where many projected the Texans would be sitting ducks, they’ve been anything but. The fact that they’re doing it against teams with a major agenda makes it all the more impressive. Dallas had to pull out all the stops and get some late Houston mistakes to beat them, followed by the Chiefs needing overtime to beat a Texans team, and then the road-win over Tennessee last week, beating a Titans team that was desperate for a win.

Injuries notwithstanding, the Houston offense is showing a lot of guts. With QB Davis Mills getting the lion’s share of snaps, with Jeff Driskel coming in for some relief, they haven’t looked half-bad. Losing Dameon Pierce has put a hurt on their run-game, but the return of Brandin Cooks paid off last week, as the veteran receiver hauled in a TD grab. And while their defense is porous and has been exploited by the majority of quality offenses they have faced; we are still seeing some big plays that have been making life really hard on opposing offenses. Despite a record that isn’t easy on the eyes, they’re still out there trying hard for head coach Lovie Smith, and maybe they’re embracing their role as spoiler.

More Picks: Get our handicapper’s top play on the NYJ/Sea Week 17 game >>>

Again, we can’t be sure how Pederson is going to play it, being that this game could be described as meaningless in the big scheme of things. Even if Pederson starts his main guys, does he stick with them? What happens if it’s just a partial cast? This is key information we don’t really have. And even if he plays his starters, will the fact that the only game that matters is next week resonate? Or will they really be trying to keep it rolling, build on some positive inertia, and be riding high when they take on a Tennessee team in week 18 that hasn’t had a thing go right in a few months? This alone makes it a tricky betting spot. We know Houston can come up with a high-energy performance when there’s nothing on the line, but will we be able to depend on the same thing from the Jaguars?

While it might not make sense that we’re seeing the best version of the Texans at the end of the season when most teams would just be trying to get to the finish line, they are, in fact, pretty dangerous. After more than holding their own against a trio of teams making a push, why wouldn’t they be able to do the same against a team that just might be phoning this one in at least partially? I don’t rule out that Pederson sees the wisdom in keeping the foot on the gas, at which point you can see the Jags winning and covering in this spot. I just see the Texans playing hard again this week, with whatever apathy the Jags are feeling resonating enough to let the Texans cover the spread. I’ll take Houston in this one.

Loot’s Prediction to Cover the Point Spread: I’m betting on the Houston Texans plus 4.5 points. Kick 2023 off right with free bowl game and Week 17 NFL bets! Deposit $100 to $300 and use promo code PREDICT100 and you’ll receive a massive 100% real cash bonus at MyBookie Sportsbook!