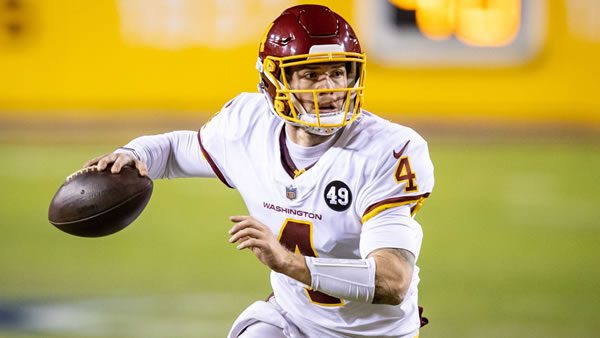 Point Spread: Dal -4/WFT +4 (BetOnline - One of the biggest online sportsbooks. They pays RIDICULOUSLY fast via Bitcoin! We tested them and it was 20 minutes!)

The Dallas Cowboys snapped a two-game losing streak last Thursday with a 27-17 victory over the New Orleans Saints. Despite a subpar performance by the offense, the Cowboys defense forced four interceptions against Saints QB Taysom Hill to pave the way to victory. With the victory, the Cowboys moved to 8-4 SU (9-3 ATS) and are still considered one of the top teams in the NFC. However, the Cowboys once substantial lead in the NFC East has been erased thanks to a four-game winning streak by the Washington Football Team, who now trails by just two games in the division. On Sunday, Washington will get a chance to narrow the gap even more, when they host the Cowboys as mere 4 point underdogs at FedEx Field.

Washington’s four-game winning streak is a product of victories over Tampa Bay, Carolina, Seattle, and most recently Las Vegas. With the winning streak, Washington has rallied from a 2-6 SU start to the season and are in the thick of the playoff hunt. Head Coach Ron Rivera has turned things around by getting the production that many expected all season from the Washington defense, which has yielded just 17 points per game over the last four games. Obviously, Washington’s schedule will be more daunting in the upcoming weeks, with division games in each of their last five games, which features multiple meetings with both the Cowboys and Eagles. However, if Washington closes out the season strong, they could steal the NFC East, which would be an incredible feat considering where the team was just a few weeks ago.

The Cowboys and Redskins rivalry has probably been the most prestigious rivalry throughout NFL history. While the Redskins name may have changed, the rivalry with Dallas has not. During the 2020 season, Washington swept the Cowboys, which was highlighted by a 41-16 beatdown on Thanksgiving Day. If Washington can pull out another win on Sunday, it would mark the first time since 1988 that Washington has won 3 straight meetings against the Cowboys. In many ways, you would think that Washington has accomplished this feat more often, considering they have met the Cowboys at least twice per season dating back to 1961. However, the Cowboys have largely dominated the rivalry and have also held the upper hand from a betting standpoint which is shown in a few of the trends below:

For Sunday’s match-up, I must admit right away that there are not many indicators pointing in favor of Washington. Despite the 4 game winning streak, Washington is not exactly blowing teams away. WFT pulled out 17-15 victories over both Seattle and Las Vegas who are arguably playing their worst football of the season. Defensively, Washington will have to deal with the balanced attack of the Cowboys offense which is loaded with talent.

I would easily entertain the argument that the Cowboys have been far from “sharp” on the offensive side of the football but I don’t think we should expect their struggles to continue by any stretch of the imagination. RB Ezekiel Elliott is playing through a knee injury and backup Tony Pollard proved
that he cannot be kept off the field by breaking the game wide open with a 58 yard touchdown run. If Dallas remains committed to keep Elliott on the field, I think it hurts them until he is 100% healthy and Washington’s strength defensively is against the run.
With that being said, the Cowboys have a big advantage in the passing game where CeeDee Lamb, Amari Cooper, and Michael Gallup provide clear match-up problems.

If you look back through Washington’s resume for the 2021 season, they have routinely been torched by the strong passing teams and that creates a big concern for Sunday’s showdown. Furthermore, I don’t believe Washington can produce the scoring opportunities to keep pace if the Cowboys’ offense finds their rhythm. RB Antonio Gibson is coming off two really strong performances but Washington’s offense remains extremely limited behind QB Taylor Heinicke. If Washington does not get the big plays, I think this is the Cowboys game to lose.

Jay’s Pick: I have to go with the probability factor here and that is laying the points. Take Dallas -4. Bet your Cowboys vs. Football Team and ALL your NFL predictions at -105 odds instead of -110 at BetAnySports Sportsbook! Making the switch to reduced juice betting will save you a TON of money!