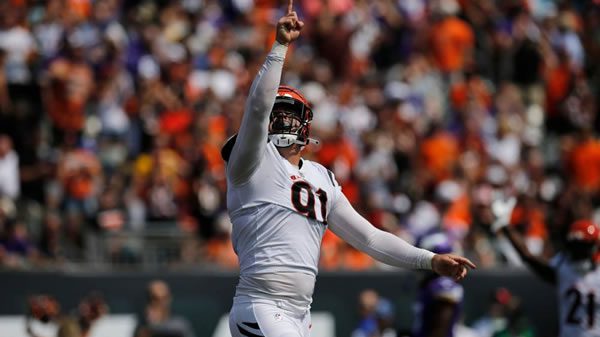 The San Francisco 49ers take on the Cincinnati Bengals at Paul Brown Stadium on Sunday. For two teams in different conferences, these teams have a lot of history together making it appropriate that they intersect on Sunday for a pivotal showdown in Cincy. At 6-6, the Niners need a positive development in a season that has seen them overcome a lot to even be in this spot. A loss on Sunday night to the Seahawks, 30-23, however, was costly and they look to atone this week. The Bengals, at 7-5, and coming off a bad loss to the Chargers on Sunday, 41-22, also need a win to further their cause as a rising team that climbed from the ashes to be a factor. A lot is at stake this week for both teams.

A three-game winning streak which included wins over the Vikings and Rams, preceded their loss to the Seahawks on Sunday, so maybe we can’t be too hard on the 49ers for slipping up against a Seattle team that was sort of due for something good to happen. And you don’t want to factor in injuries too heavily, with the 49ers having shown so many times they can overcome all that to a certain degree. But maybe they’ve hit a wall.

And it’s really no fault of their own. One can even say with any luck on the injury front, we’d be looking at a real contender, but it is what it is. And what it is now is a list of injury setbacks are too numerous to describe. Now, on top of all the setbacks on both sides of the ball, RB Eli Mitchell will need to clear concussion protocol to see the field on Sunday. Defensive starters Emmanuel Moseley, Dee Greenlaw, Dee Ford, and Fred Warner went down on Sunday and are out or iffy, as the “D” stands to lose even more chunks. Deebo Samuel is questionable with a groin. And even fill-ins were hitting the floor on Sunday night, with WR Jauan Jennings and RB Jeff Wilson hurt. It’s a disheartening situation and while they’ve dealt with it before, it’s getting to be too much now.

I think this is part of the reason the 49ers came up short against Seattle on Sunday. They showed ample guts and inner-resource to still be in the picture this long into the season, but it might be hard to justify a strong enough stretch-run to make it stick. They are alarmingly deep into the barrel in the RB and WR category. If guys like Mitchell and Deebo can’t go on Sunday, the optimism gets a little dim, especially considering who they’re going up against this week.

Entering the third straight home game in a big homestand, the Bengals look to atone for a loss on Sunday where embarrassing mistakes stripped them of a chance to win. To drop two in a row at home would put a major dent in their cause. Coming from where they were, it wasn’t easy to emerge as a semi-contender, but now we’ll see if they’re a team with promise that fades into the good night or a team that can really make things happen. With a bye thrown in there, the Bengals have been away from home just once since late-October and will only have to go on the road once more until January 9. With a lot of road games back-stacked on their schedule, they have a chance to really dig in and get comfortable at home as they pursue the postseason.

On paper, it would appear that the Bengals are in good shape here going against a San Fran “D” that gave up the first good offensive day to the Seahawks in weeks, while losing even more pieces in the process. With Joe Burrow slinging it to his multitude of targets namely Ja’Marr Chase and Tee Higgins, with Joe Mixon getting his, it’s going to be a lot to contain for a compromised Niners’ defense. The largely-intact Bengals’ offense could overwhelm the Niners with their variety and firepower this week, but that’s not always a given. And with Burrow dislocating a pinky finger, we’ll see how that affects him.

For however compromised the 49ers’ defense is, they can still capitalize on mistakes. While one might imagine that the Bengals put a lot of energy into atoning for how they undermined themselves last week, it’s a problem that could easily resurface—at least enough to throw this spread into a funk. And we’ve also seen some pretty inconsistent results from the Cincinnati defense this season, oscillating from a respectable group to the one we saw last week—allowing big pass plays all over the field. This could be a spot where Jimmy Garoppolo can go to town with a surging George Kittle, Brandon Aiyuk, and maybe Samuel if he’s back in the fold. It’s just not going to be easy without Mitchell, Deebo, or both.

This could backfire, if the Niners have in fact hit a wall. And this is a game that warrants keeping close track of the injury factor. If every or most key San Francisco players listed as questionable end up not playing, the personnel woes could make SF an unattractive position. I still see the Niners able to make things happen on offense, with enough big plays on “D” to keep this one close. I know it seems counter-intuitive on some levels, but I just see this as being tougher on Cincy than what might first appear to be the case. I’ll take the Niners.

Loot’s Prediction to Cover the Point Spread: I’m betting on the San Francisco 49ers plus one point. Did you know that you can bet your NFL sides and totals picks at -105 instead of -110? Dump your overpriced bookie TODAY and start saving big bucks by making the switch to reduced juice betting at BetAnySports Sportsbook!