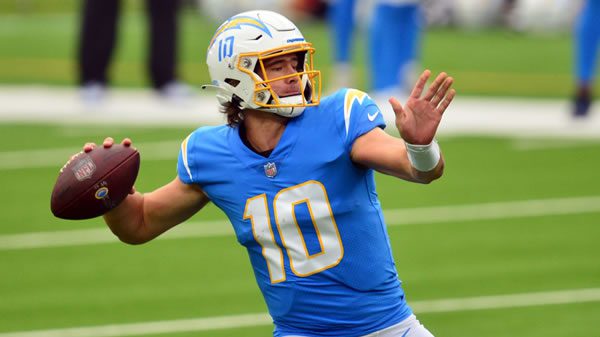 Point Spread: NYG +10.5/LAC -10.5 (Betanysports –  Be smart! Make the switch to ths awesome bookie where you can bet on ALL sports at discounted odds! You only lay -105 on football/basketball!)

The New York Giants take on the Los Angeles Chargers at SoFi Stadium on Sunday. The 7-5 Chargers, still in the playoff hunt, look to start putting the wins together and Sunday was a good start—a 41-22 win on the road over Cincinnati. They now host a Giants squad that fell to 4-8 on Sunday in a 20-9 loss to the Dolphins. Now dealing with injury issues at quarterback, they face even more obstacles this week in what looks to be a tough cross-country road trip. Who can come out ahead on Sunday and notch the cover at SoFi?

At quarterback, Daniel Jones went down a few weeks ago, with Mike Glennon filling in. He suffered a concussion at the end of the Miami game and If he can’t clear protocol, it will be Jake Fromm, the former Georgia standout, at starting QB. Either way, being this deep in the QB barrel isn’t promising. Fromm could be a diamond in the rough, but that would be a surprise since he was signed off the Buffalo practice squad less than two weeks ago, suggesting he’s less than a prized prospect.

It’s not just the QB situation. The Giants have a deep rotation of receivers, many of which are frequent additions to the injury report. Seldom have they had all or most of their weapons available. Coming off a bad injury last season, we’ve yet to really see the Saquon Barkley we all have become accustomed to seeing the last several seasons. Add a bunch of injury setbacks on the other side of the ball and it’s a disheartening situation.

Main Issues for the Giants

With guys like Logan Ryan, the Giants’ secondary can be a difference-making one on occasion. But overall, their secondary is rather average, meaning there isn’t anything they do particularly well. With Barkley and Devontae Booker, they rarely are able to establish a meaningful run-game. You’d think this is a spot where they could get some foothold against a Chargers’ run defense that almost allows teams to run on them. But it hasn’t been a source of much production so far this season for the Giants and therefore, it can’t be cited as a source for much optimism in any spot.

Again, there is a wealth of targets on this Giants’ team, made less-fearsome by the constant carrousel of injuries, in addition to the lack of someone who can get the ball in their hands. And it’s not the quarterback’s fault, as the line has to take some of that responsibility. The Chargers can bring some heat on defense, with playmakers throughout all phases of the unit. If Glennon manages to get on the field and especially the rookie Fromm, this might not be the best matchup. And again, there isn’t much relief on the other side of the ball, with a Giants’ run-defense that could give way to a good showing from Chargers’ RB Austin Ekeler. And while their pass-defense has held up well in spots, it’s possible they could be in a rough spot this week with Justin Herbert and his top weapons, namely Mike Williams and Keenan Allen.

On the road against a good Chargers’ offense, the Giants are going to need to keep pace. And doing so with a quarterback who is getting his first start and hasn’t been on the team for even two weeks might not be so easy. They can’t establish the run. You can’t figure their aerial game will suddenly take flight, so what are they banking on other than a down day from the Bolts’ offense or that their defense manages to do something big? And from that angle, allowing just 33 combined points in their last two games shows they are getting some decent results on that side of the ball. Miami’s offense was humming along nicely before running into the Giants last week.

Good Spot for the Chargers?

Beating the Giants, especially in their current incarnation, is paramount for the Chargers if they want to be a contender. We have seen all close games in the Chargers’ first three games against the NFC East this season, with all games decided by four or fewer points. The Chargers are a team that ends up in a lot of close games, sometimes playing down to the level of their opponent. Last week was more an aberration, as the Chargers haven’t really been dominating many teams this season—just food for thought as the Bolts are laying a big number this week.

But big plays on both sides of the ball loom as a major threat to the Giants, who have only a fraction of that splash-play ability. Whether it’s monster sacks from guys like Joey Bosa (questionable) and big plays from S Derwin James on defense or if it’s big pass-plays from Herbert and Allen or long runs from Ekeler, there’s an explosive element on this team the Giants haven’t been able to match. But at this number, the Chargers are going to need to be at or near their maximum power

The Chargers aren’t always an ideal favorite along these lines, as they often aren’t shot out of a cannon and can struggle when you don’t expect them to. I just think it’s time to wrap one’s head around the possibility that the Giants really stink right now. And with the personnel issues now in the red, the prognosis moving forward doesn’t get any rosier. Having to cross the country out of conference to take on a team that might be steeling itself for the stretch run just doesn’t ring as an ideal spot for the Giants this week, even with the large number. I’ll take the Chargers.

Loot’s Prediction to Cover the Point Spread: I’m betting on the Los Angeles Chargers minus 10.5 points. This line is all over the place and can be found as low as 10 and as high as 11 across the web. If you’re only playing with one sportsbook, you should seriously consider upping that number to three, as shopping for the best line will increase your winning percentage against the spread a few percentage points over the year, which is often times the difference between being a winning bettor or a losing bettor! It also gives you the opportunity to add free loot to your bankroll as all of our advertisers offer sportsbook bonuses up to 100%.