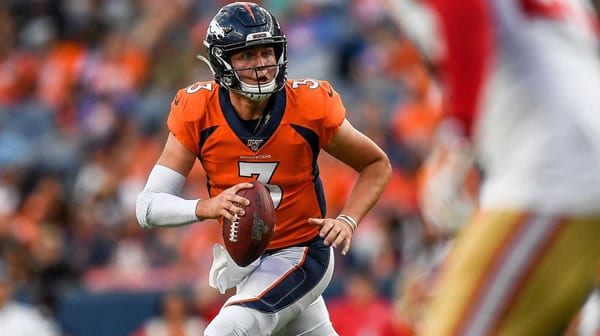 Since starting the season 0-5 and firing Head Coach Dan Quinn, the Atlanta Falcons have managed to somewhat turn things around by winning 2 of their last three games. The loss was a mere 23-22 defeat to the Lions in a game that should have also been a victory. Needless to say, Interim Head Coach Raheem Morris has done a decent job of minimizing the play-calling mistakes while still maintaining aggression on the offensive side of the football. On Sunday, the Falcons should have another winning opportunity when they host the Denver Broncos at Mercedes-Benz Stadium as 4 point favorites, which is the largest margin Atlanta has been favored all season.

The Denver Broncos will travel to Atlanta on the heels of an impressive come from behind victory over the Los Angeles Chargers. The Broncos trailed 24-3 during the latter stages of the 3rd quarter but were able to come up with several big plays to score 21 points in the 4th quarter to seal the victory. As a result, the Broncos have compiled wins in 3 of their last four games and amassed an impressive 5-2 mark against the spread on the season. If the Broncos can come up with another victory on Sunday, they could legitimately climb back into the hunt for an AFC Wildcard playoff spot, which is something that many people thought was impossible after the 0-3 SU start to the season.

WR Calvin Ridley out with injury against Denver

In last Thursday’s victory against the Panthers, it was the first time since the start of the season that both star receivers Julio Jones and Calvin Ridley had been healthy. Julio had an excellent performance catching seven passes for 137 yards in one of his best performances of the year. After Julio’s hot start, Calvin Ridley appeared to be heating up but suffered an ankle injury that ended his night. Ridley has been the Falcons biggest star on offense this season, ranking 3rd in the NFL with 657 receiving yards and seven touchdowns. However, the ankle injury that Ridley suffered will likely have him sidelined for a couple of weeks, meaning the Falcons will be without one of their biggest weapons.

The good news for Atlanta is that Julio Jones appeared to be back to his old self in last week’s win against Carolina. Jones was targeted frequently in the absence of Ridley, which raises his floor/ceiling again this week in another opportunistic match-up against Denver. QB Matt Ryan has been solid this season with 2,462 passing yards, 12 touchdowns, and four picks through the first half of the season. Ryan and company will have the luxury of facing the 9th ranked pass defense by DVOA. It’s not the best match-up for Atlanta’s offense, but it’s also not overwhelming. As long as the Falcons do not help Denver in terms of turnovers, their offense still provides the most probabilistic path to victory in this match-up.

Reasons to fade Denver in week 9

Before the late comeback against the Chargers, Denver’s offense was having another inconsistent afternoon, which has been too common in recent weeks. The fact that Denver has won three of the last four games is rather surprising when you look at the offense’s production. However, we also have to take into account 2 of those wins were against the inept offenses of the Jets and Patriots. Last week, the offense was not having any success until running back Phillip Lindsay broke open a 55-yard touchdown run, and then QB Drew Lock was able to capitalize on the momentum to make a few plays in the 4th quarter to help in the victory.

Still, when you look at the overall picture, the Broncos have a subpar offense. Lock is barely completing more than 50% of his passes, with four touchdown passes compared to five interceptions. As a result, the passing attack ranks 26th in the NFL. WR Jerry Jeudy is a high-quality talent but is not exactly in the optimal situation to showcase his skills. TE Noah Fant has been banged up, and out of causality, the Broncos have put more focus on the ground. Even in that arena, the Broncos have been very mediocre rushing the football with Lindsay and Melvin Gordon. Though both runners have shown flashes of big-play potential, it has been far from consistent. Therefore, I think Denver’s defense is the only reason this betting line is so close. The Falcons have the far better offense and easier path to victory here. Also, take into account, Denver will be traveling across the country for an early kick-off, and I think we have extra incentive to fade the Broncos’ inconsistency.

Jay’s Pick to Cover the Point Spread: I like Atlanta here. I think they will target Julio heavily and produce enough offensive output to score another victory. If the Falcons can get a little defensive help, it will make things really easy. Take Atlanta -4. Bet this game and ALL your football picks at -105 odds (instead of the spendy -110 your bookie is socking you) at one of the web’s best sportsbooks: BetAnySports!